All over the world, from the start of March 2020, the coronavirus pandemic has led to various restrictions like social distancing, self-isolation, travel restrictions and enforced home office for many employees. For the CALENDARS project, the restrictions have much affected our work as fieldwork and interviews were about to start in both Norway and in New Zealand. As we have rearranged the workflow and work more on the conceptual part of the project in this phase, the team members have also kept diaries of how seasonal changes are experienced during the times of lockdown

Next
The Ice valley in Bergen on a clear spring day
Photo:
Anne Bremer
1/4
Both the ground and the humans are thawing from the winter freeze in the sun
Photo:
Sissel Aasheim
2/4
A narrow cart track leading to an abandoned isolated farm
Photo:
Sissel Aasheim
3/4
Outdoor concert in the park
Photo:
Elisabeth Schøyen Jensen
4/4
Previous

We spent the whole day on an island east of Bergen. It was beautiful sunny weather but still cold of course. We decided to go to a rather remote part of the island and filled our backpacks for a full day out. The girls were not too keen on coming along but a promise of grilled sausages on the obligatory bonfire made them change their mind. Our first stop after parking the car was at an old abandoned farm, now used as a cabin for the Norwegian Trekking Association. The cabin was locked due to the restrictions, but it did not matter, we wanted to be outside in the nice weather. The outside area of the cabin is beautifully made up, with a big campfire and places to sit around it. As the others made the fire and food ready, I laid down on the grass and I could feel the warm sun in my face. Feeling very tranquil in the quiet surroundings I almost forgot about the coronavirus.

We were there for quite a long time and a few families walked by, giving us hopeful looks as they passed. If it had been a normal day, with no coronavirus around, they would probably have joined us around the campfire, as it sure was big enough for at least two families. The place is called “The children’s cabin” as it is well suited for families with small children, I am definitely sure at least the families with the youngest children had planned to stop here. Feeling a bit guilty for occupying the place, we decided to continue walking when a family with three little children came by. They patiently kept a distance as we packed up our gear. We knew the cart track we were on would eventually lead us down a very steep hill to another abandoned farm by the sea and we started walking in that direction. Even if it was nice and sunny, the girls could still find icicles in the shade. As we were walking, we passed a few of the families that we had seen passing by. A few weeks earlier, we would have stopped and had a little chat about the weather, the beautiful surroundings etc., but now it was only a polite ‘hi’, everyone making sure to keep an appropriate distance. A little lake still had a thin layer of ice and the girls had fun in trying to break the ice by throwing little rocks in the water. Funny, as soon as they are out in nature, at age 14 and 15 they enjoy doing the same things as they did when they were 4 and 5 years old.

Descending towards the farm we had to turn around about halfway down as there had been a rockslide. Still, we could see the farmhouses way down there and imagine how it would be to live in such an isolated place. I guess that was quite a different kind of isolation than we are experiencing now.  The sun went down just before we got back to the car and it was quite cold, not that warm spring feeling anymore. Coming back to our house and connected to the internet again, reality hit, the coronavirus was not gone after all.

The Walk and Talk or just “hanging out” re-develops.  Strolling round and about in the city, parks, and new parts of town.  We seem to rediscover more “youthful” socializing (in contrast to pubs, dinner parties, concerts, cinema, lectures, meetings, cafes, parties, lunch ect.), but also a way of being together more associated with peak summer.

Scavenger hunt with the kids, on a sunny and crisp day. On the list is – among other things -snow (it snowed the day before), sun, crocus, bare twigs, a scooter, birds… I noticed the crocus sprouting up, out of the middle of our lawn, just two days before. Today I see a daffodil.

While out on the scavenger hunt, we all close our eyes and turn our faces to the sun. We’re so glad to have the weather to take the kids out almost every day during lock-down. The daily excursions are defining our new repetitive routine. When we spot an abandoned scooter for our scavenger hunt its beside the dam outflow, which is running high, and the rushing noise is filling Bear valley. We also hear the birds tweeting noisily in the trees. My hands still feel like winter. The knuckles are all dry and cracked and they hurt, so the air must still be cold enough to dry them out. But just a couple of days before we spent two hours in the sun and all came home red faced from the sun.

The evenings are getting to be really light, and the late sun comes streaming into the house around 7pm as we try and get the kids ready for bed, they can hear other kids playing in the streets outside, and one evening recently, the ice-cream truck came around. The nights still feel cold. We pull the covers up to our chin, and when the kids kick their covers off, they yell out. We changed the sheets on our bed and we put the flannel sheets on, saying this will be the last time we have them this season; next time we change the sheets it will be for lighter sheets.

The somewhat forced Norwegian “outdoor pint” at new levels.  We had a few nice days in March, and actually two of them were on a Friday. On one of them I met a friend in a park and we set up my laptop and saw a live corona-concert with a local hero while drinking rose hip tea and port. We sat on a bench keeping the regulated 1 meter distance and had lots of blankets and even a candlelight with us!  It was thirty fantastic and beautiful minutes with live music, a stunning sunset in a park close to the sea, before the iPhone providing the Wi-Fi went out of battery because of the cold. Then it started to rain.

I went walking up Ice valley with a friend and his kids…in a blizzard, which broke, and then came upon us again. That day saw waves of foggy white snow squalls that rushed up the valley over the black lake, and in between waves, perfect sunshine that lit up the snow. The two older girls ate A LOT of snow and felt sick. So they started throwing snow in the gushing and gurgling drains. We walked up to an abandoned campsite and ate some early Easter candy. Miraculously they felt well enough to eat candy. We also had the sledges, so they slipped down the hill some. It's difficult with the two one-year-olds because it's still really wet underfoot, and cold. We sit them down in their overalls, but they end up flailing around in muddy puddles and eating rotten leaves. So, we mainly have to carry them all the time, which they aren’t happy about. On the way down we look for twigs that we’ll take home and decorate for Easter. We have porcelain eggs and metal rabbits that we will hang from bare twigs, sticking out of a vase like a skeletal Christmas tree. Of course, the girls just end up whipping each other all the way home.

That afternoon we primp the twigs. We have a lot of kitsch ornaments from Germany that are bright yellow, orange and lime green, with pictures of baby chicks and rabbits and flowers. They’re typical Easter ornaments and plastic crap that the one-year-old puts to the axe…between her teeth. I don’t think she swallowed anything. They also tell me the official colour scheme of spring. That night, when the kids sleep, we take stock of the chocolate bunnies and chocolate eggs that we’ll hide in the garden over Easter. I’m trying to get ingredients to make hot-cross buns, but the lock-down caused everyone to hoard yeast like drugs. I have brown bread yeast which will have to do. 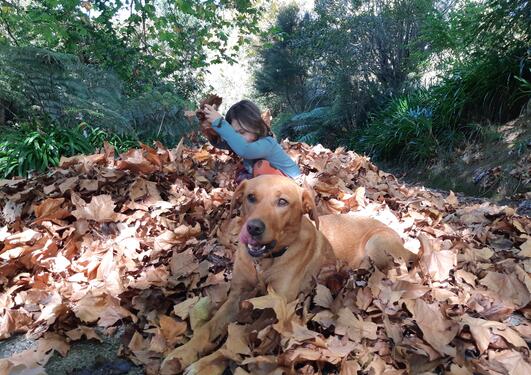 We continue our seasonal diaries in the times of lockdown. This time, an update from New Zealand