The research approach: How do seasonal cultures change?

CALENDARS both studies processes of seasonal change in communities and institutions and engages these groups in consciously re-calibrating their calendars.

Artists and programmers are challenging our perceptions of seasons in the virtual world, through the recently released video game ‘Season’, or VR simulations that let users play with time.
Photo:
www.play-season.com

First, this project focus brings a critical edge, and attends to the messy changes to groups’ seasonal cultures in turbulent times. While other research looks at seasonal traditions, we focus on what happens when those traditions are turned upside down, and people look for new seasonal ways of life. We focus this inquiry by zooming in on particular communities, or institutionalized fields of activity; from schools to botanical gardens, artist collectives to conservation groups.

Secondly, this project works closely with groups of people in targeted communities and institutions to together appraise their calendars and recalibrate them to shifting seasonal realities.

We don’t aim to simply observe changing seasonality but also help bring about changes in how people perceive and give effect to seasons through a transdisciplinary approach mobilizing scientists and targeted groups as an extended peer community. This demands reflexive modes of ethnography, which encourages subjects to ‘think again’ about seasons with researchers; through interviews, participant observation and workshops.

The ultimate aim is to co-produce revised calendars and understandings of how to act seasonally. As each institution is different, with unique relations to the seasons and matters of concern, the members of the research team similarly adjust their focus and methods to each group. This results in a project that is a rich agglomeration of studies of seasons, revealing of different aspects.

Third, we work closely too with artists, designers, and film-makers because to the extent seasons are cultural frameworks, it makes sense that they change culturally.

In Bergen, we work with artists Magnhild Øen Nordahl and Cameron Macleod at Aldea atelier to build a Virtual Reality simulation of Bergen, wherein users can ‘play with time’ at different scales, from diurnal to seasonal rhythms. We both study the construction of this simulation and use it in workshops with different groups.

In New Zealand, we work with film-maker James Muir who is accompanying the researchers in the field and documenting peoples experienced changes to seasonality. In New Zealand we also work with designer Edgar Melitao, who is designing calendar templates with us and co-facilitating workshops re-drawing calendars.

Illustration to the right:

A survey in 2018 asked Norwegians about how they visualize the shape of the year. Most visualize a circle, but there were an array of forms, revealing a creative cultural potential for rethinking the year.

In NRK Beta article "This is what the year actually looks like", this drawing by a boy named Kristoffer is described as one of the most detailed illustrations the journalist received after he asked the Norwegian people what the year looks like inside their heads.

The CALENDARS project is focused on achieving five outcomes at different scales, zooming out from the research team to societies globally:

1. Create a locus for robust, creative and careful research on seasonal cultures in institutions, nurturing growth in researchers.

2. Groups in a set of institutions critically reflect on, appraise and adapt their seasonal representations and practices.

3. Communities in Bergen and on Coromandel Peninsula critically reflect on changing seasonality in the places they live.

4. Societies worldwide share and compare what seasons mean for them and how this is changing

5. Initiate enquiry into cultural frameworks of seasonality in fields of climate and seasonal adaptation. 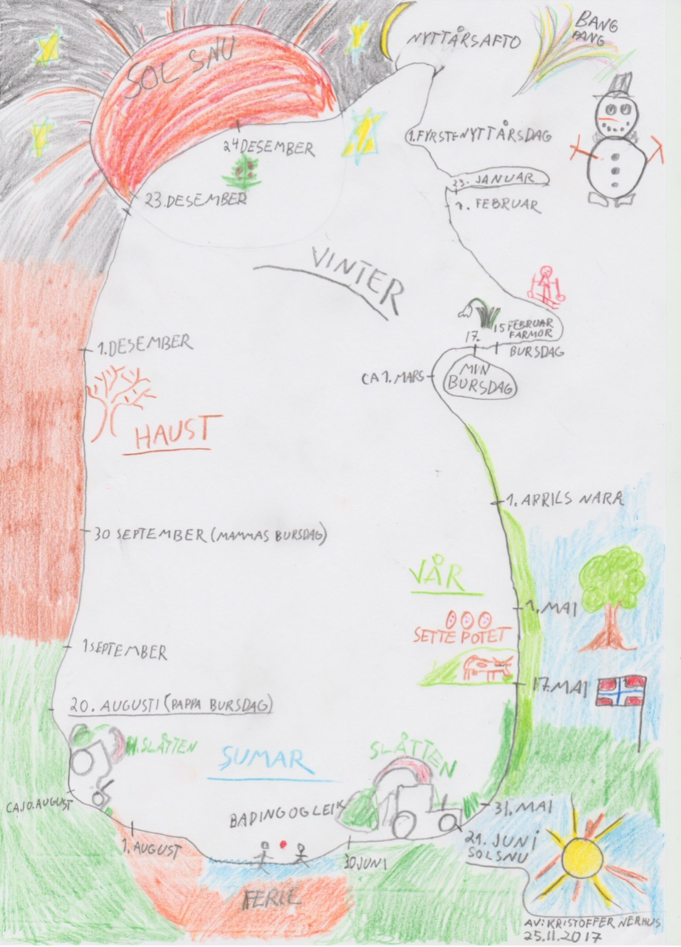