As the first two weeks of the CCBIO/Harvard Long Course on Cancer-Related Vascular Biology are completed, the attending students report to be greatly inspired by the Harvard scholars who are teaching most classes. This course reflects the INTPART collaboration between CCBIO and the Vascular Biology Program at Boston Children´s Hospital and Harvard Medical School.

The INTPART collaboration between CCBIO and Boston is aiming for increased contact and mobility between our institutions, including both education and research. The most recent activity is a long course where CCBIO students and postdocs are being tutored by Harvard scholars in addition to our own experts. The first week (Part I) was September 17-21, the second week (Part II) was October 1-5, and the last week (Part III) will be in February 2019.

In this course, students benefit from the knowledge of researchers who have been in the frontline of vascular biology research for decades, and who are experienced lecturers at Harvard Medical School.

The first course week was lectured by Professor Bruce Zetter and Dr. Michael Rogers, both from Harvard Medical School and Boston Children's Hospital. Being in class not only provided knowledge on cancer-related vascular biology, but both speakers spiced the lectures with experiences and tips on how to get key results and achieve progress as well as building a career.

Both lecturers demonstrated excellent abilities in activating and challenging the students, making them reconsider their perspectives of cancer biology and biologic processes. As the class was rather small (15 students), there were great opportunities for questions and discussions during the whole week. Zetter and Rogers soon became Bruce and Mike for the students.

The first week covered some of the basics of cancer-related vascular biology along with concepts of cancer biology and precision medicine. Both lecturers gave additionally open research seminars, where they presented up-to-date results from their research on targets for cancer therapies, including interesting stories on drug repurposing and with tips to the audience about recognizing and seizing opportunities for collaborations and idea development – which sometimes occur in unexpected settings.

Pitching your research ideas in an elevator

The students attending the course were thrilled by the outcome after the first course week, enthusiastically giving feedback such as 'excellent', 'amazing', 'super interesting' and 'very motivating'. They learned greatly from the research experience and lecturing of the Harvard scholars, and were encouraged to always question what is stated, and to believe in their own ideas. At the last day of the first course week, Bruce Zetter improvised an additional lecture on how to give a scientific talk, and the students were challenged to give an ‘elevator pitch’; imaging selling their scientific key messages in a 20 second elevator trip with Bill Gates!

The road to excellence

Bruce Zetter also contributed as speaker at a CCBIO Special Seminar the same week on the issue of scientific excellence, along with Merle Jacob (Lund University), Lars A. Akslen (CCBIO) and Roger Strand (SVT/CCBIO). Here, they discussed different ways to conceptualize and achieve excellence, leaving the audience both inspired and a little thought-provoked. Read article “The road to excellence” here.

Week 2 kickoff by our own experts

The second course week set out with lectures by local faculty. Reidunn Edelmann guided the students through important details of basic vascular biology, including in-depth lecturing on endothelial biology in inflammation, with highly relevant aspects when aiming to understand vascular biology in cancer. Oddbjørn Straume lectured on anti-angiogenic treatment; about concepts, myths and realities. As a researcher with clinical practice, Oddbjørn demonstrated strong clinical examples of effect and lack of effect in anti-angiogenic therapy. Both Reidunn and Oddbjørn facilitated interesting discussions and student participation throughout their lectures.

Professor Marsha Moses and Dr. Roopali Roy from the Vascular Biology Program, Boston Children’s Hospital and Harvard Medical School, set out by inviting the students to a chat over a cup of coffee, and stated; ‘We’re totally there for you!’ This was highly appreciated, and several of the students took the opportunity to make appointments to discuss their projects with the Harvard scholars.

Bringing research to clinical use

Professor Moses, director of the Vascular Biology Program at Boston Children’s Hospital and Harvard Medical School, is a highly experienced researcher within the field of vascular biology, and has worked at the Vascular Biology Program since the early days of Professor Judah Folkman. In the CCBIO907 course, Professor Moses provided excellent overviews of ways of developing biomarkers, and demonstrated important challenges and possibilities during the steps from biomarker discovery to clinical use. Professor Moses’ experience at all levels in the chain of bringing biomarker findings to clinical use provided new insight and perspectives to both junior and senior researchers amongst the audience. Particularly issues related to sample handling was eye-opening for the course participants. Further, Professor Moses encouraged the students to patent and license their discoveries early on. The students from the University of Bergen also noticed that the importance of innovation in science is much more emphasized in the US than in Norway.

Dr. Roopali Roy gave lectures on proteases and metalloproteinases in vascular biology and cancer, and brought the students the long way from the basics of this field to current news, also related to results that are relevant for therapy. Researchers from different fields attended the lectures, and appreciated the comprehensive content that was given.

The lectures by Professor Moses and Dr. Roy where truly complementary, and gave the students very interesting and highly relevant overviews and detailed information on important aspects of the cancer-related vascular biology, and provided perspectives on how to bring results closer to clinical application.

The good interacting course environment established during the first week, definitely continued during this second part, giving the students ample time for discussion with and feedback from the Harvard scholars.

Professor Marsha Moses and Dr. Roopali Roy teamed up with Professor Roland Jonsson, Vice Dean for Research Education at the Medical Faculty, and Dr. Anne Blanchard, researcher at CCBIO and the Centre for the Study of the Sciences and the Humanities (both University of Bergen) for an open seminar focusing on mentoring in science, titled “The Importance of Mentoring for Career Development.”

Complementary presentations on the importance of mentoring in academia, the different possible models for mentoring, and perspectives and practical tips on how to be a mentee that gets the best out of his/her mentors were presented. In addition, some reflections were shared on the limits of a mentor-mentee relationship, such as dependence, power imbalance or some more structural limitations that come in the way of long-term mentoring. Important web resources, literature and exercises were shared. After a pizza break, the discussions went lively for nearly 90 minutes.

The students’ feedback reflected their appreciation of the presentations and the following discussion, and one of the students at the seminar stated: “This seminar should have been mandatory for all PhD students and postdocs!” Another student pointed at the fact that there were not many senior researchers and faculty present from the UoB Medical Faculty. Mentoring was agreed to be a fundamental part of research, so let’s aim to attract both junior and senior researchers next time we are hosting a seminar on this issue! 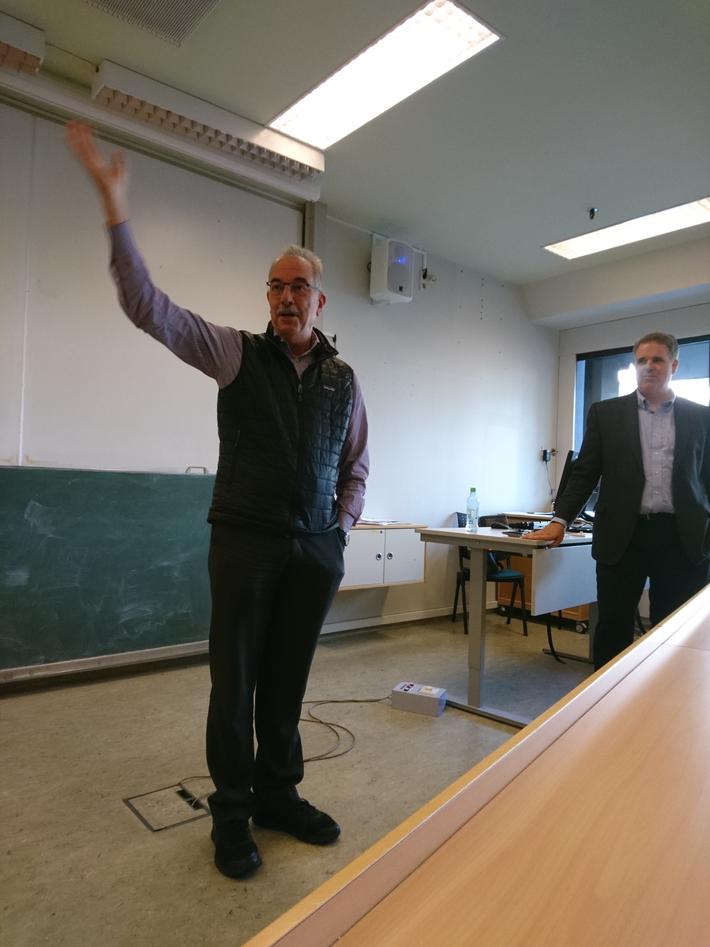 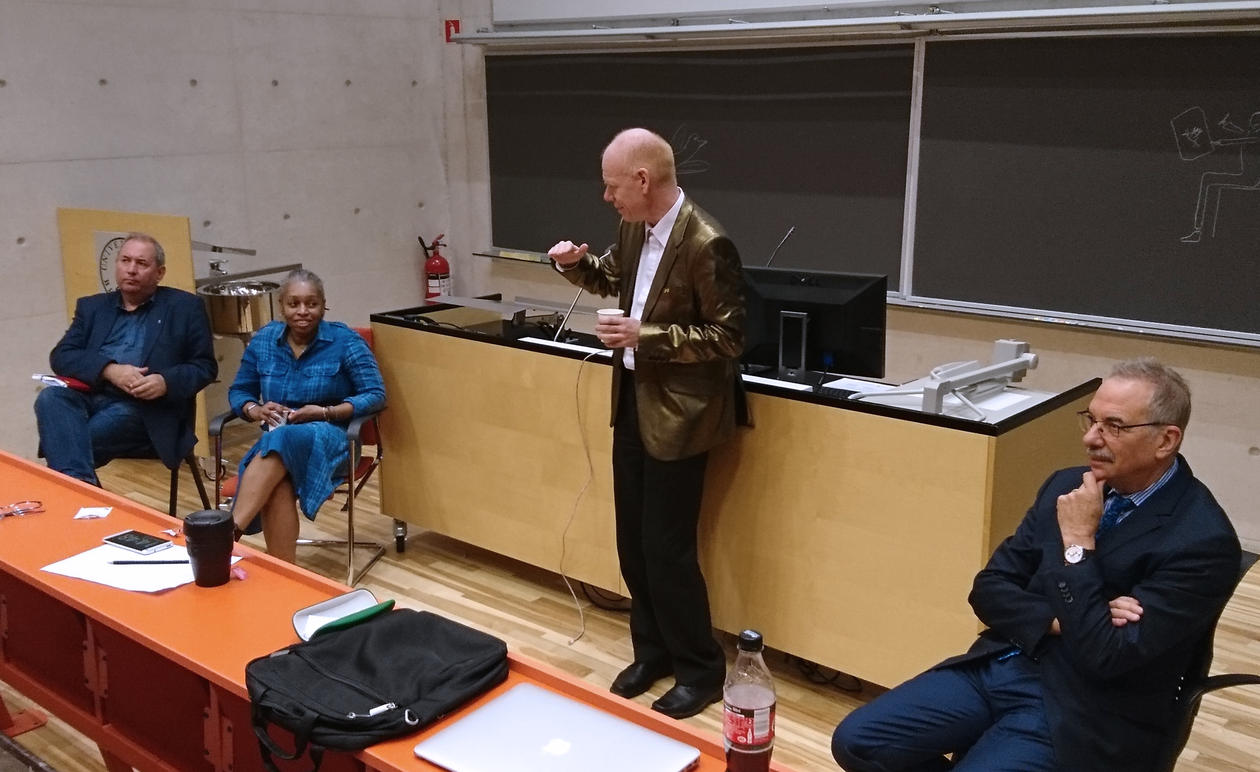 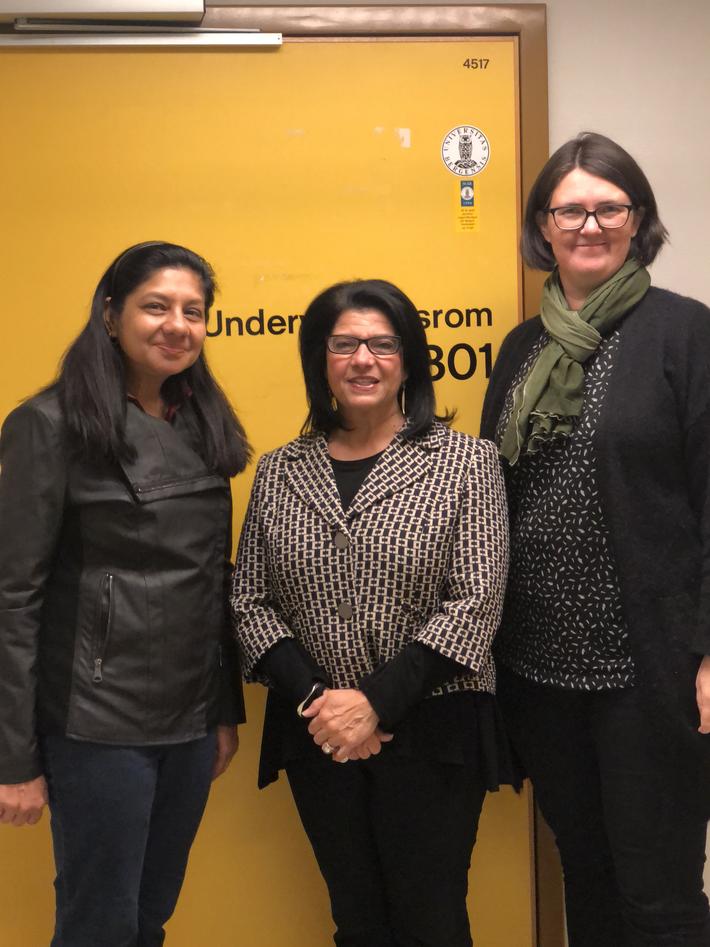 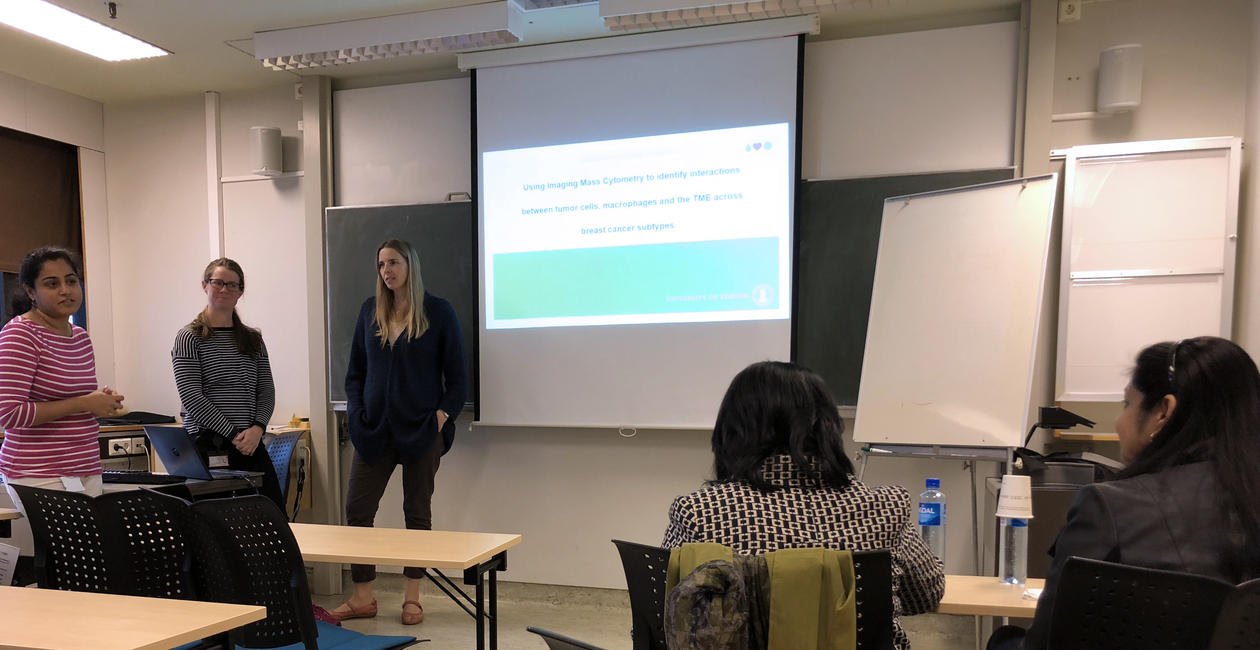 Young CCBIO researchers getting advice and tips on their project from Marsha Moses and Roopali Roy.
Photo:
Elisabeth Wik 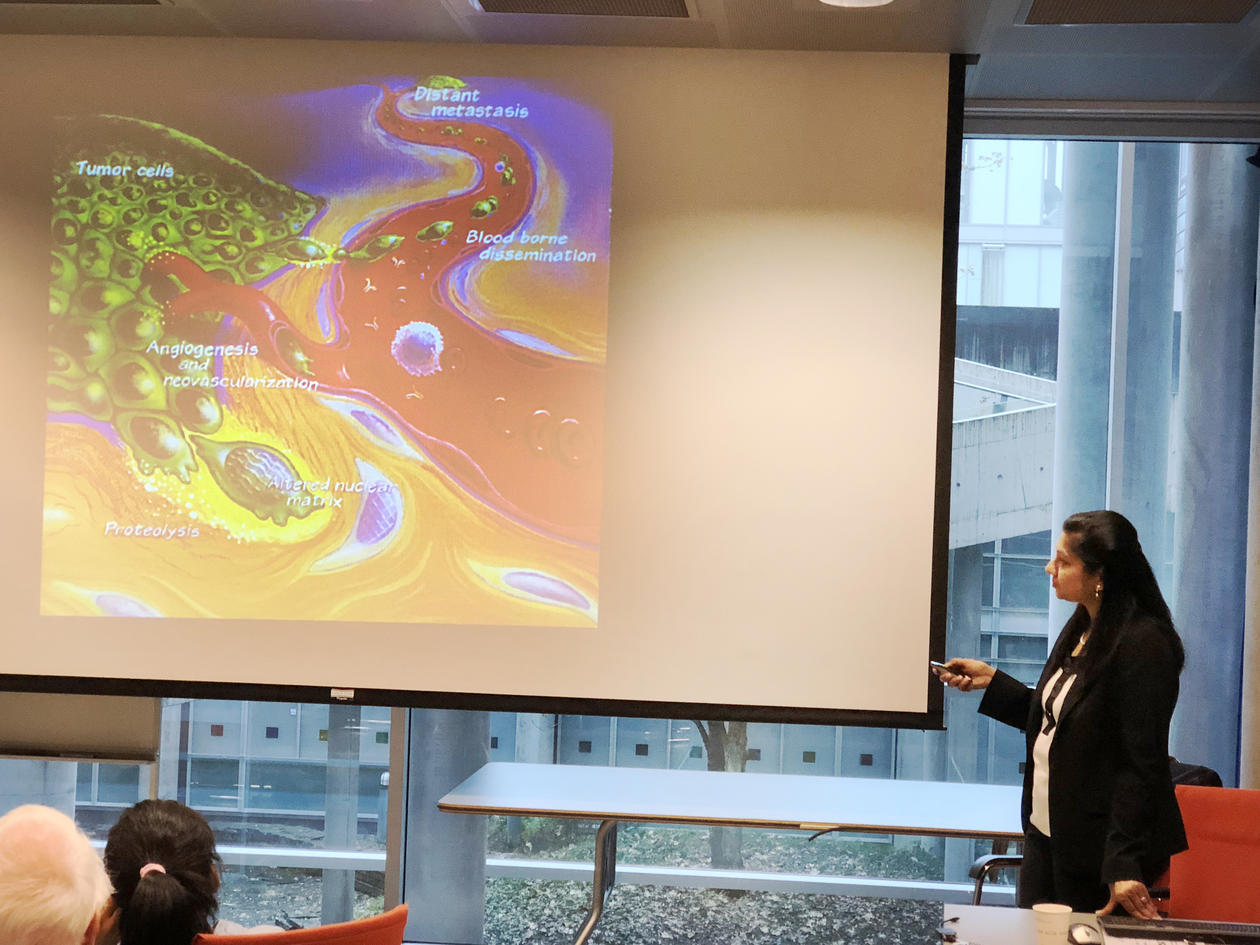 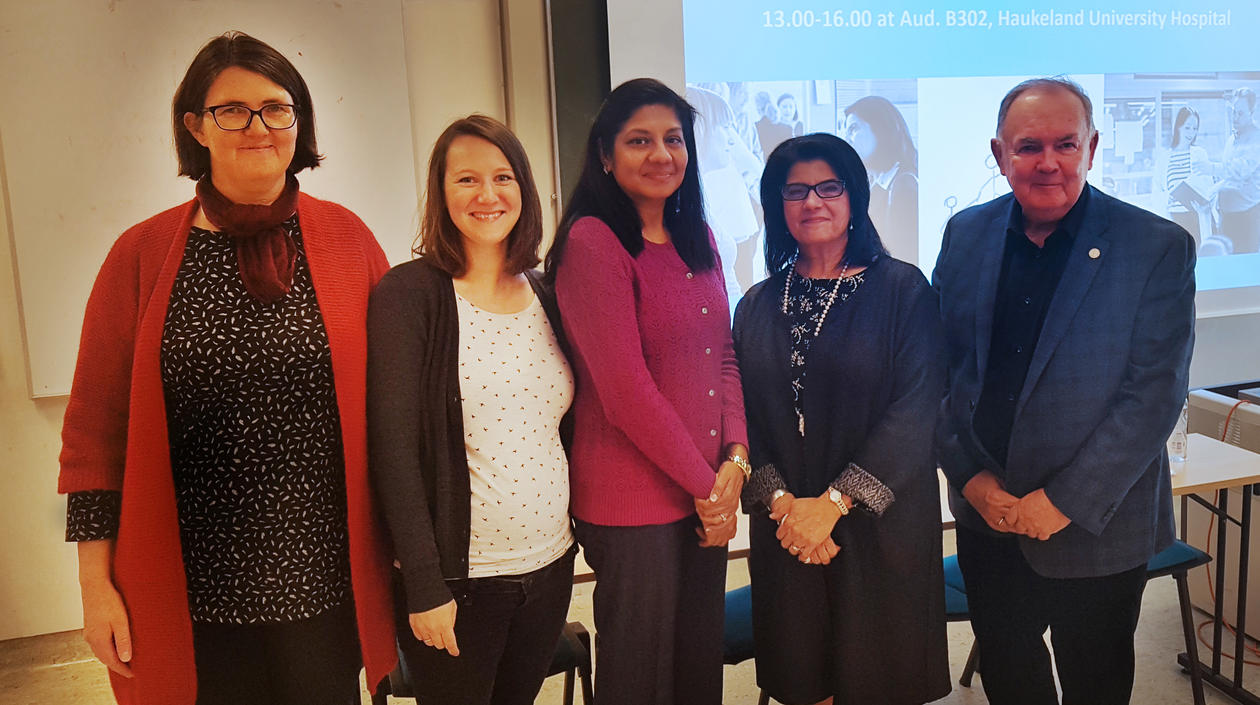