On October 20, CCBIO hosted a Celebration Seminar to celebrate the awarding of the King Olav V’s Prize for Cancer Research 2021 to Professor Bjørn Tore Gjertsen. Leaders from the university and the hospital as well as close colleagues gave highly praising speeches and scientific talks.

Team-builder Bjørn Tore Gjertsen emphasized that the award would not have been possible without great colleagues and collaborations.
Photo:
CCBIO/Ingvild Festervoll Melien

The event was splendidly opened by a quintet from Eikanger-Bjørsvik Musikklag, one of the best brass bands in Norway and Europe, and with which Gjertsen has a personal relationship as he played the cornet and flugelhorn here for many years.

A driving force and a role model

Bjørn Tore Gjertsen is one of the Principal Investigators at CCBIO since the startup in 2013, and co-director since 2016. CCBIO’s Director Lars A. Akslen gave a short introduction where he described Gjertsen as one of the true “translationists” in Norwegian cancer research, with strong focus on basic studies combined with exceptional clinical engagement and commitment to his patients, colleagues, and students.

“Bjørn Tore, this is very well deserved! You have distinguished yourself as a researcher and clinician in a very positive way. In CCBIO, you are a driving force and a role model for young researchers. You are analytical, creative, energetic, and maybe a little distracted once in a while. It came as no surprise that you would one day meet the king - thank you so much for your impressive efforts,” Akslen said in his introduction.

Eivind Hansen, CEO of Helse Bergen, attended the ceremony in Oslo on October 18, where the king presented the award to Gjertsen. In a video presentation, Hansen thanked Gjertsen for his commitment to the patients, and for his comprehensive research on leukemia that has provided - and will continue to provide - groundbreaking results. Hansen praised Gjertsen's ability to reach achievements in collaboration with others, both regionally, nationally and internationally, a quality he emphasized as essential for performing great research in the future.

Congratulatory speeches were also given by Per Bakke, dean of the Faculty of Medicine, Astrid Olsnes Kittang, head of the Hematology section, Haukeland University Hospital (HUS), Eystein Husebye from the management of the Department of Clinical Science, UiB, and Steinar Skrede, assistant director at the Medical Clinic, HUS.

The scientific part of the program was composed by close colleagues who have collaborated with Gjertsen during his career, and a talk by Gjertsen himself.

Professor Emeritus Stein Ove Døskeland has had the opportunity to follow Bjørn Tore throughout his career and gave the audience an insight in his scientific journey all the way back to Bjørn Tore's early years. Døskeland, who was awarded the King Olav V's Prize for Cancer Research in 1995, emphasized that Gjertsen had made important contributions to Døskeland's work, both scientifically and technologically.

Professor Emmet McCormack has worked closely with Gjertsen since he first came to the UiB, and he presented a range of preclinical models and imaging techniques he has developed together with Gjertsen. Professor Line Bjørge presented an overview of collaboration projects with Gjertsen on tumor biology of ovarian cancer and described Gjertsen as a great source of inspiration with a broad research capability and strong, versatile skills. Professor Stian Knappskog gave a talk on clonal selection in cancer, and Professor Oddbjørn Straume presented the tumor microenvironment in malignant melanoma, where he drew parallels between cancer cells' response to stress in the microenvironment and Darwin's evolutionary biology. Gro Gausdal, director of research at BerGenBio ASA, gave an overview of AXL in targeted cancer therapy, and highlighted Gjertsen as an inspiring role model for her and for the others who came under his umbrella as young researchers.

Before Akslen provided the concluding remarks, Gjertsen gave the talk "Novel diagnostics and adaptive cancer therapy", where he presented an overview of targeted and individual cancer therapy as well as drug response testing and personalized medicine in leukemia, the field for which he received the award. He also looked to the horizon with an inspiring take on the future of personalized cancer medicine. It was obvious that Professor Gjertsen does not intend to rest on his laurels quite yet.

The Celebration Seminar was a joyous opportunity to finally be able to gather at Campus Haukeland for a large event with around 250 attendants in Store Auditorium with personal attendance after the pandemic. When the formal program was completed, the discussions and celebration continued for two hours with delicious food and cake, and then Bjørn Tore Gjertsen, heavily loaded with flowers, could finally go home and get a bit of rest, loading up for renewed efforts in the service of cancer research and patient care.

The Norwegian Cancer Society has each year since 1992 awarded the King Olav V's Prize for Cancer Research to a cancer researcher or research group who has distinguished themselves through scientific contributions to Norwegian cancer research.The award amounts to 1 million NOK, is considered as a great honor in the Norwegian research communities and goes to the very best in the entire spectrum of Norwegian cancer research. According to the criteria, the candidate's research should be of benefit to cancer patients and will continue to do so in the future, the researcher should have achieved international recognition, and he or she should promote and strengthen Norwegian research communities.

Read more about the King Olav V's Prize for Cancer research here.
Also read an article about the awarding here. 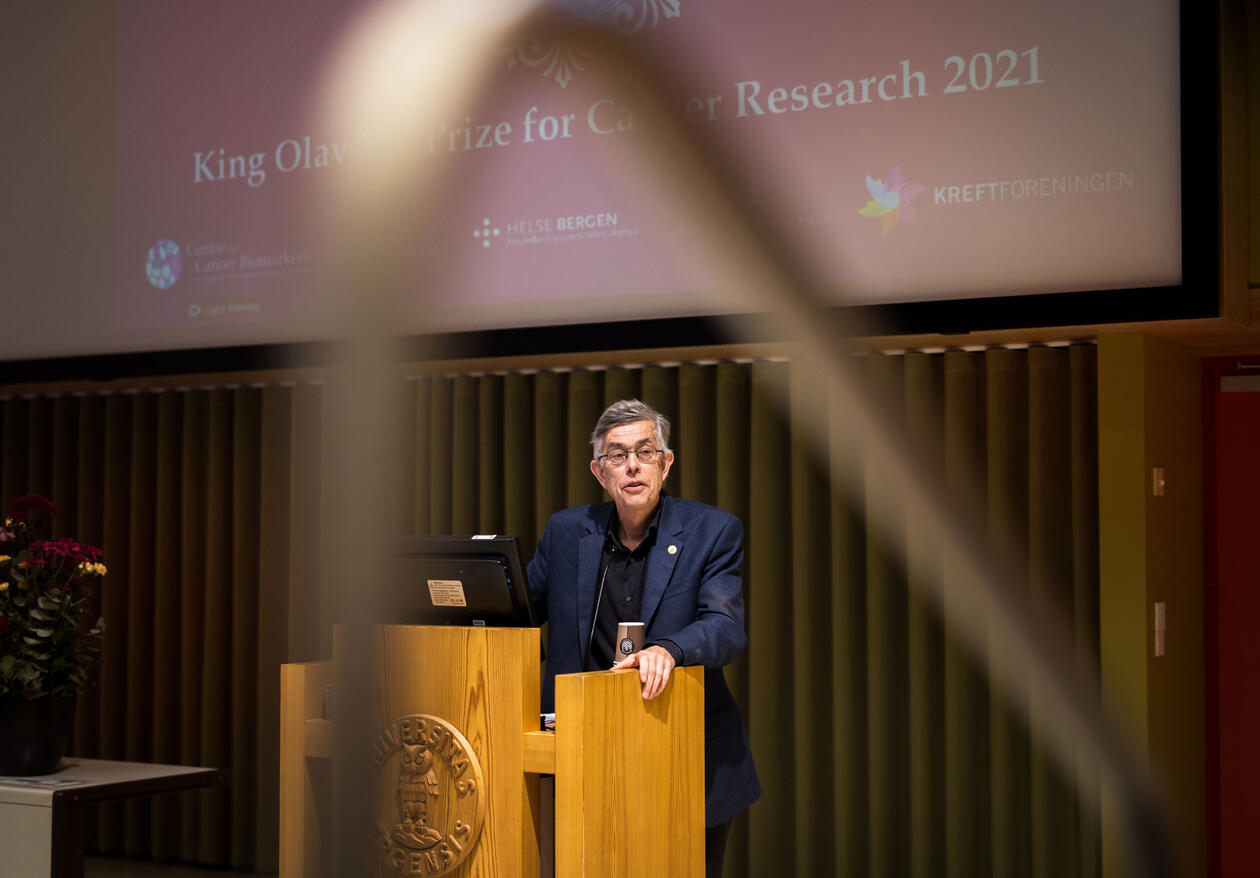 Per Bakke, Dean at the Medical Faculty, gave one of the congratulatory speeches.
Photo:
CCBIO/Ingvild Festervoll Melien 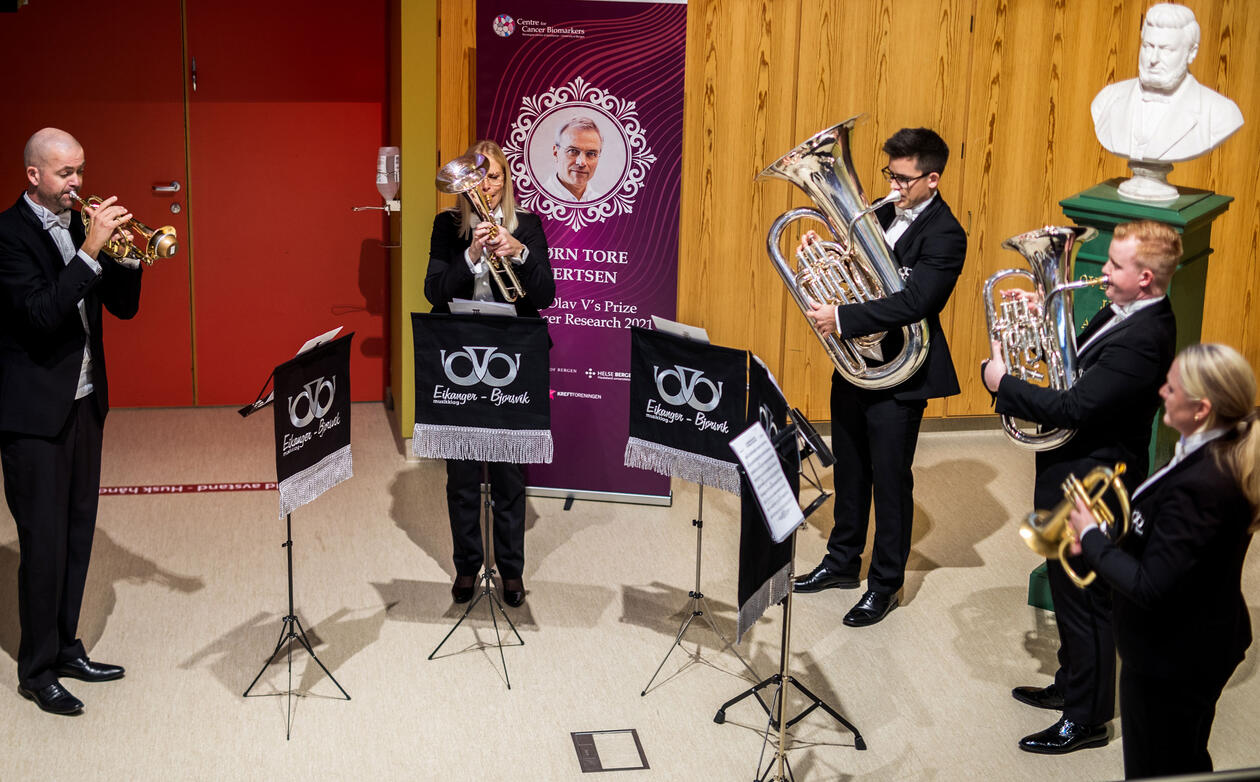 A quintet from the Eikanger-Bjørsvik Musikklag, where Gjertsen has been a musician himself, opened the seminar with Te Deum by Marc-Antoine Charpentier.
Photo:
CCBIO/Ingvild Festervoll Melien 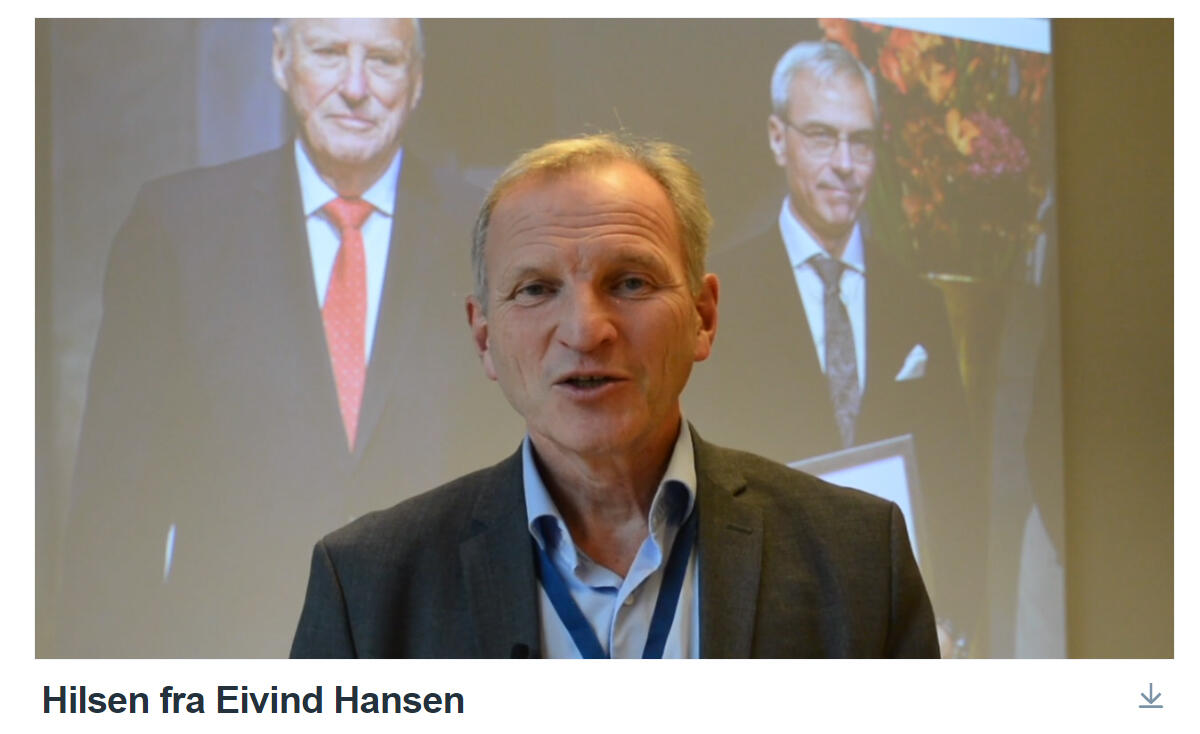 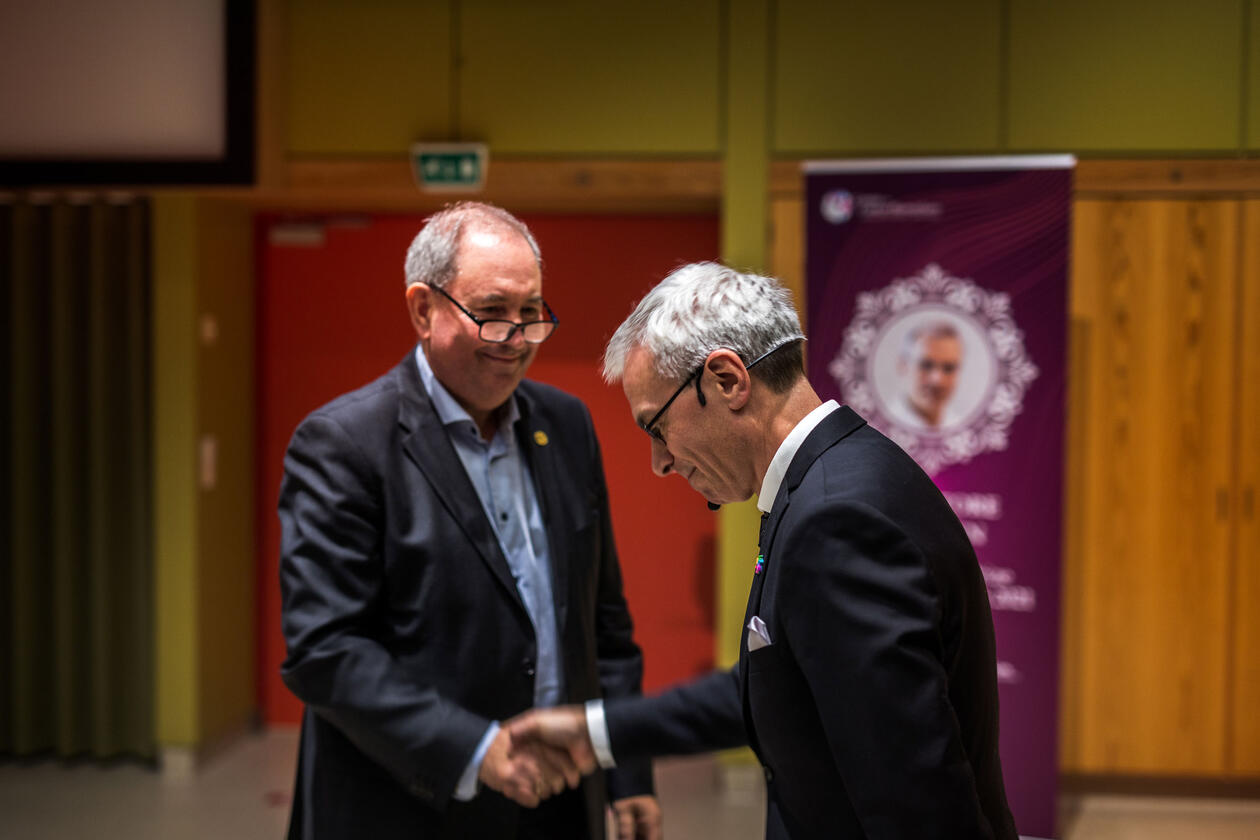 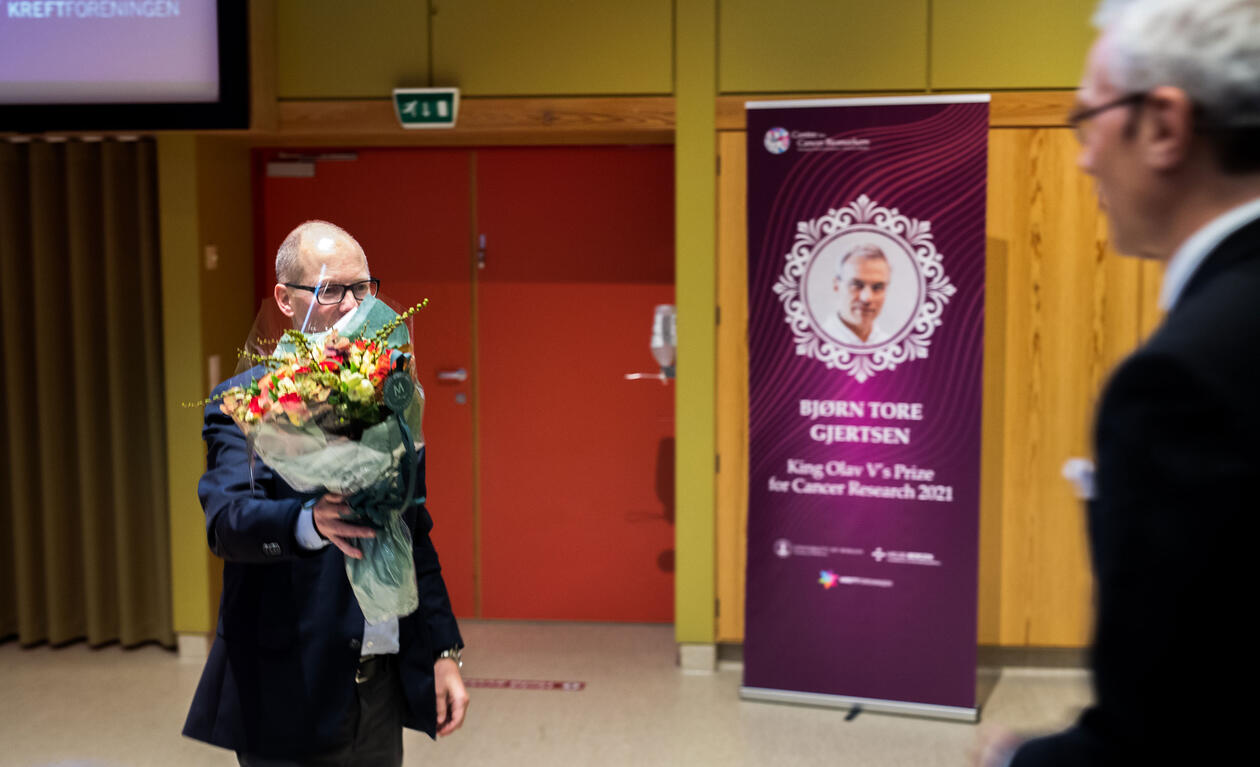 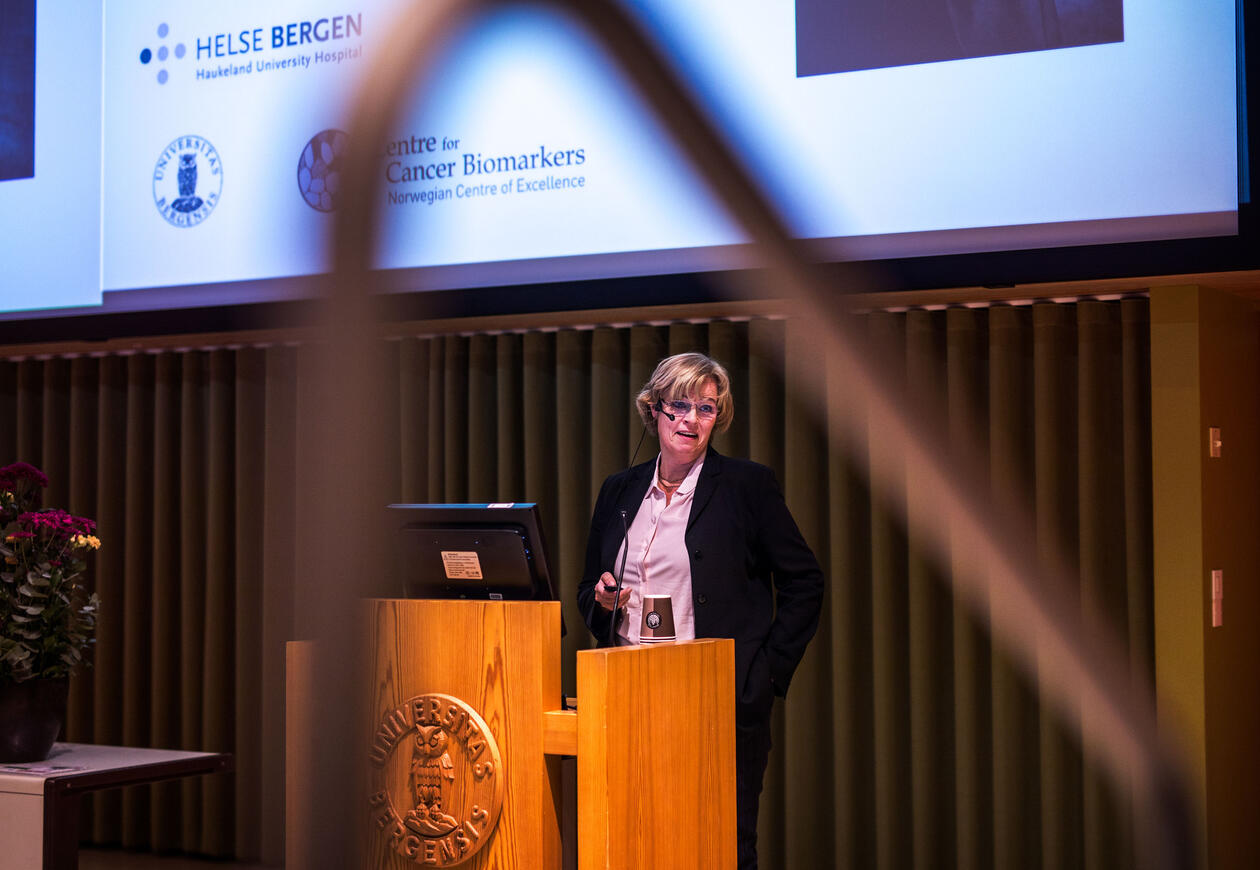 Line Bjørge, a close colleague and one of the other CCBIO PIs, gave a scientific talk and highlighted her collaborations with Gjertsen.
Photo:
CCBIO/Ingvild Festervoll Melien