Beyond our randomized controlled trials …

The Centre of Excellence, the Centre for Intervention Science in Maternal and Child Health (CISMAC), was established in 2013. It is based at the Centre for International Health, in the Department of Global Public Health and Primary Care, at the Faculty of Medicine, University of Bergen.

June 2019, nearly 60 CISMAC, or CISMAC-associated researchers gathered in Bergen to celebrate the success of the Centre’s first 5-year period, to review some of the Centre’s achievements and highlights, and, more importantly, to reflect on the way forward in the next 5-year period and beyond, establishing the CISMAC partnerships and networks as a sustainable, long-term, international consortium.

The Planning committee, consisting of CISMAC Director Halvor Sommerfelt, Deputy Director Ingvild Sandøy, Scientific Coordinator Jose Martines, and past and present Administrative leaders, Catherine Schwinger and Ane Straume, respectively, organized an intense schedule to make maximum value of the face-to-face time together. In addition to including opportunities to present status updates from some of the projects, there were greetings from university leadership, input and ideas concerning future funding directions, invited speakers with expertise in various topics, including intervention science and observational studies, as well as group activities aimed at strengthening existing collaborations and encouraging new ones.

CISMAC’s original focus was on large, long-term, high-quality randomized controlled trials (RCTs) of new Mother, Newborn and Child Health (MNCH) interventions that aimed to estimate efficacy and evaluate the delivery of efficacious interventions, measuring effectiveness in real-life settings. Most of these are still on-going, but the first has been completed and some of its results will soon be published. However, the suggestions of the External Mid-Way Evaluation Committee included putting greater emphasis on implementation research, as well as making greater efforts towards getting research findings into policy and practice (GRIPP).

In addition to RCTs, other future research directions for the CISMAC consortium could include:

The intensity of the 3-days of discussions and meetings attests to the strong engagement this diverse group feels for Mother and Child Health (MNCH) research. The CISMAC consortium consists of a network of international partnerships that have been developed over many years. At this meeting, CISMAC senior researchers were able to interact with younger research leaders, some established, and some just starting out on their research careers. This “cross-generational” collaboration will strengthen existing partnership bonds and enable these partnerships to be more sustainable, and long-term. CISMAC is also working to encourage the development of Early Career Researchers (ECRs) by establishing a CISMAC Research Training Track.

CISMAC Director, Halvor Sommerfelt’s introductory remarks were supported by welcomes from University of Bergen (UiB) Pro-Rector, Margareth Hagen and the Dean of the Faculty of Medicine (MED) at UiB, Per Bakke. Hagen spoke of going beyond the need for more science, to the need for making science more accessible. She congratulated CISMAC on its contributions to knowledge and capacity-strengthening to making a better world. According to Bakke, CISMAC is helping MED – and, indeed, the government of Norway – achieve the goals of the Granavolden platform, by contributing to the achievement of the Sustainable Development Goals (SDGs), particularly in the area of MNCH, adolescent girls, capacity-strengthening and knowledge transfer.

Although the funding of global health research in Norway is undergoing fundamental changes, CISMAC invited several speakers who had helpful ideas about how to search for funding for future projects.

Svein Bæra from the Norwegian Agency for Development Cooperation (Norad) underlined the recently adopted strategic policy for Norad. In this policy, it states that Norwegian development activities should be informed by evidence. He spoke of science diplomacy that results in building bonds. By working together, he says, we can solve global problems together. However, he underlined the need for better communication between the different players - scientists, decision-makers, the civil service and the general public. He highlighted in particular, the need to strengthen the bonds between research institutions and civil society actors, such as NGOs, Red Cross, etc..

Bæra also pointed out that researchers are well placed to inform society beyond knowledge that is relevant today, to knowledge that might be important in the future. He spoke of the need to understand the differences between science and politics, and underlined the need for scientists to develop the skill of delivering a 90 second talk!

Frederik Frøen, from the Norwegian Institute of Public Health, explained that the very nature of Global Health funding calls is changing, and the current calls do not support implementation research and capacity strengthening per se. He believes that the major funders are moving slowly from a focus on the Millennium Development Goals to the Sustainable Development Goals. He says that there are also increasing demands for research that can inform policy and support evidence-based decision-making. Frøen cited the following funders and programmes during his talk.

Ramune Midttveit, from MED, and Emmanuel Babatunde, from the Division of Research Administration at UiB, also spoke about  upcoming MNCH funding opportunities, mentioning programmes that have been announced or which are “in draft”. Babatunde mentioned in particular the EU’s Marie Sklodowska Curie Actions to support young researcher exchanges. 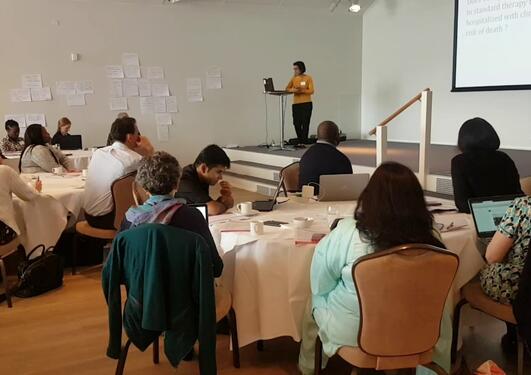 Gathered to plan the future of CISMAC

The partners of Centre of Intervention Science of Mother and Child Health (CISMAC) recently met at Sotra to celebrate five years of important research and plan for future collaborations.