Earlier this August Statsraad Lehmkuhl sailed to Arendal, combining the voyage with a climate and renewable energy conference in collaboration with the Bjerknes Centre

Thursday the 8th of August, the tall ship Statsraad Lehmkuhl sailed out from the Bergen harbour, headed for Arendal, and the political festival called Arendalsuka.  This year, the crew of the ship was filled through a collaboration between the Bjerknes centre for climate research and the Statsraad Lehmkuhl Foundation, with the aim to merge a voyage on board a tall ship with a climate outlook and renewable energy conference.  Because of this initiative, I was able to join the voyage through my work with Bergen Energy Lab.

Considering that we weren’t on board for more than three days, everyone definitely made the best out of the time. As part of the conference aspect of it all, Finn-Gunnar Nilsen had a talk on offshore wind, and Meike Becker introduced us all to the world of chemical oceanography through the carbon cycle. We discussed energy supply and new solutions as well as our ever increasing consumption in contrast to the need for us to consider to say goodbye to a few of the luxuries we’ve gotten so used to in rich countries like Norway. You often get a little bit too used to talking about these issues with the same people from the same backgrounds every day, so to get the opportunity to actually get some new points of views really does increase the level of the discussion. It’s important for all different sectors to communicate, and how better to do this than to bring them all, scientists and science administration, people from large businesses, consultants and also an engaged group representing the coming generation, on board a ship with no way out for three days.

However, we did not just discuss climate change, trends and renewables, we also learned about the ship. The crew of Statsraad Lehmkuhl could truly answer close to any question you could possibly have regarding the ship, whether you were wondering about the best way to steer through a patch of messy waves, currents and winds, all seemingly moving in opposite directions, or navigation, or even why the different sails are called what they are. It’s only in Norway we call sail nr 2 from the bottom “Stumpen” and it’s called this because sail nr 2 and 3 were originally one huge sail, “Brammen”, but due to saving money and cutting crew numbers it was cut in two (as in “splitte mine bramseil”), and the lower part, the “rest” was from that point on just referred to as “Stumpen” (as in “det går på stumpene løs”). And the sail on the very top is called “Røijl”, which is just how sailors who didn’t know english pronounced “Royal”, the English fleet’s “show off”-sail which is not very useful but looked fancy when the other ships usually just had four sails, then of course, the English fleet needed five sails.

And of course we worked shifts, I was on the 12-4 shift, which we all agreed is the shittiest shift, meaning that they trusted our toughness the most (the other groups admittedly did not share this point of view), we raised and lowered sails, which for our part mostly meant “pulled in ropes” and adjusted the rigging. There was also rounds to be done looking for the occasional fire, looking out for things ahead, boats, islands, floating trees, looking out back for anyone who should happen to fall overboard (I soon figured out that this is extremely difficult in the dark at 3AM when all you can see is either the foam directly behind the boat moving up towards you, and then sinking down several metres before moving towards you, at the same time as moving away from you... As you might imagine this is a recipe for sea sickness, which makes you close your eyes for just two seconds… which is the other thing you see until you get startled by the person looking for the occasional fire). And of course we got to actually steer the ship which was an experience in itself.

Sunday afternoon we sailed into Arendal, singing shanty songs while standing in the shrouds (the rope structures going up to the first sail), and on monday four of us stood on the UiB-stand, approaching anyone interested enough to stand at a safe distance looking at our stand, and talked with them about renewable energy, climate change and communication on the basis of the projects we represented: Ekte Data, Om i Morgen, Værtinnen & Havmesteren, and of course Bergen Energy Lab.

It was an amazing voyage and experience, a lot of fun, good discussions and interesting presentations, both by the “guest crew”  and the actual crew, a little bit of sea sickness, some amazing waves washing over board spraying everyone with sea water, starry nights and lightning on the horizon. Thanks to the Bjerknes centre and Statsraad Lehmkuhl for all the organizing, and thanks to Bergen Energy Lab for letting me tag along! 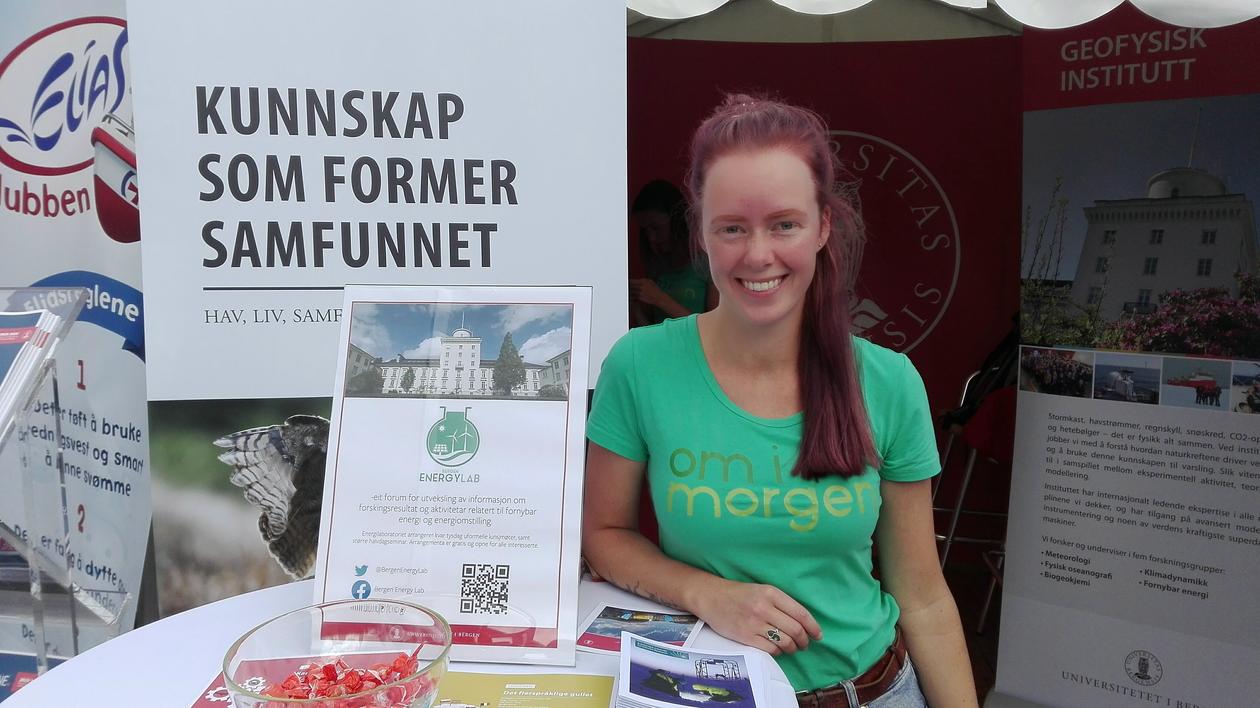 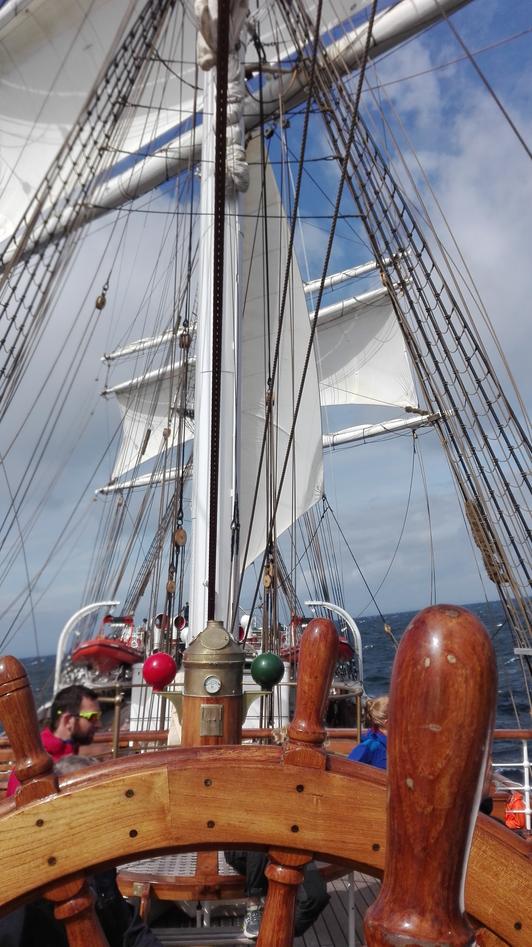 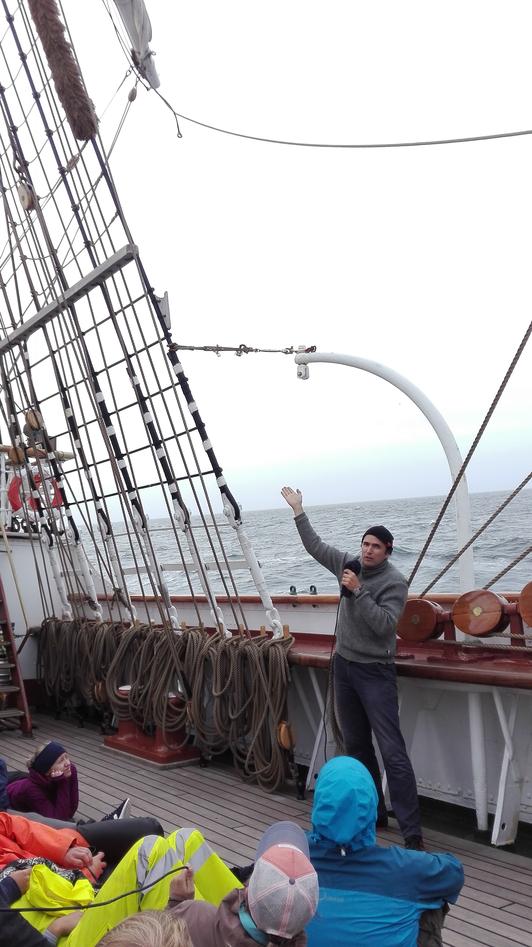 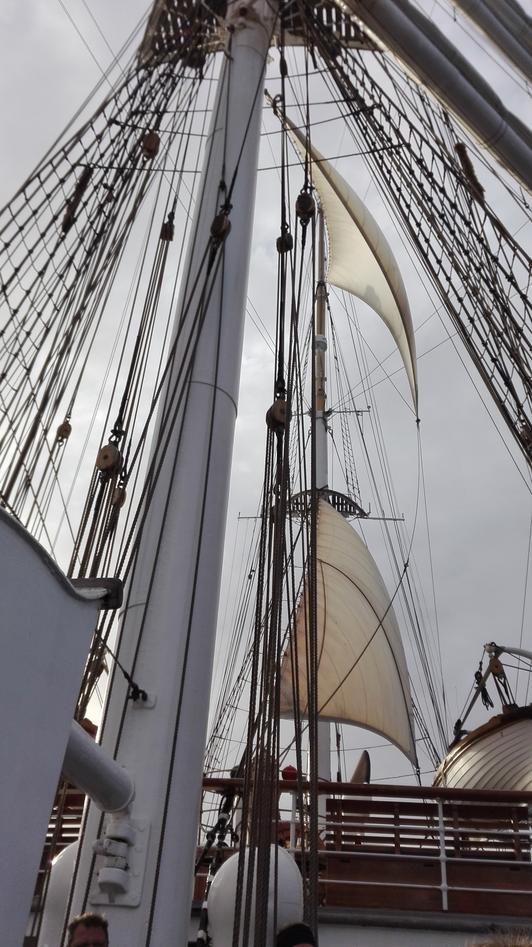 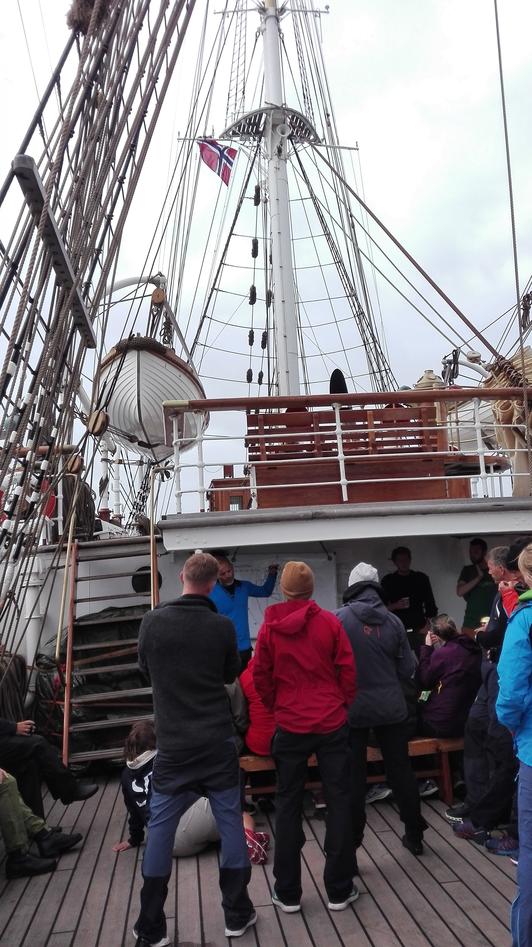