text and photos by Courtney Flanagan

Switzerland is not a big country, so the distance between the small village of 150 people where Tamara grew up to Zurich is physically not exceptionally far. However, in every other aspect, it is quite a distance!

Tamara is from a farming family, and the only one of her siblings, or even most of the young villagers, who was interested in pursuing education into high school, let alone a master's degree in volcanology in Greece, let alone a PhD study at the University of Zurich on the Deep Project, of which this summer's cruise is a part.

She is clearly a woman of considerable initiative and curiosity and courage: she has gone parachute jumping (she loved it) and studied languages in New Zealand and Italy. Last year, when she and her Swiss fellow student came to Bergen to work on the cruise and went for their required medical test, the friend was told that the doctor had discovered she had diabetes(she had no clue); as a result, she was not allowed to go. This happened on a Friday; on Monday Tamara boarded the ship alone, as one of the very few Norwegians, and in charge of doing a job (collecting pore water) at which she had had very little practical experience. Nervous but ready for the challenge, she jumped into the work!

Tamara's particular job, collecting the pore water, demands precision and speed. As soon as the sediment in a core is exposed to the air, it begins to change so taking the water quickly is of paramount importance.

She uses a syringe, and takes out several samples in each layer that seems interesting. She puts in a syringe about every one centimeter,so each layer has perhaps as many as 6 syringes.

She studies the pore water on ship for what it shows about the chemical reactions in the sediment. Later back at the university lab she will analyze the samples for their elements and mineral content. The element analysis is more accurate so that is her major focus. However, the minerals are what will give the real history of the sediment layer. They will show for example evidence of hydrothermal activity.

Beginning with her first cruise last year, Tamara has learned from all of the other scientists. Each one, she told us, knows part of the story. It is this aspect of the Deep Project, that it combines the efforts of the geologists like Tamara, and the microbiologists and macro biologists, which makes this work especially interesting to her. She hopes to continue as a researcher in this field.

A final note: at a point of pause in her graduate studies, Tamara went back to her family's farm for 6 months. During that time she helped her father cutting wood. As a child her parents, whom she describes as quite liberal,had never required her to do farm work, but instead allowed her to follow her passion for books and studies. It is truly descriptive of this charming, unassuming, very "centered" young woman that she found this time with her father, returning to finally help him on the farm, a very important time in her life. "It was very special," she said, and so is this young woman. 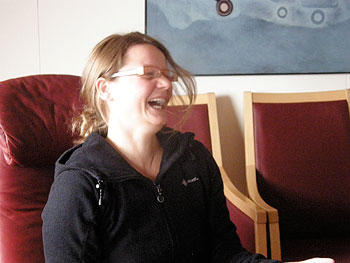