Cindy Van Dover – a Passionate Proponent of the Deep-Sea

Cindy Van Dover will give her honorary doctorate lecture Thursday 30 August, in Realfagbyget’s Auditorium 4, at 14:15.

The lecture is entitled, "Offshore ocean exploration, industrialization and conservation". Van Dover is a member of the Centre for Geobiology’s Scientific Advisory Committee.  Friday 31 August she will receive an honorary doctorate from the University of Bergen for her contributions to deep-sea research.

Cindy Van Dover is a Harvey Smith Professor of Biological Oceanography, the Director of Duke University Marine Laboratory and Chair of the Division of Marine Science & Conservation at Duke University in North Carolina. Her experience lies in the ecology of chemosynthetic ecosystems. Other areas of expertise include biodiversity, biogeochemistry, conservation biology, ecology, and marine science.

A pioneer in deep-sea biology and the ecology of chemosynthetic ecosystems, such as the ones found around hydrothermal vents, Van Dover is very much a “hands-on” researcher. In 1989 after the completion of her PhD, she trained as a pilot for the deep-diving manned submersible, ALVIN, and was pilot-in-command for 48 dives. Van Dover says "the best way to learn is to be in the field looking at animals in their natural habitat".

In recent years Van Dover has also been strongly involved in advisory roles relating to the Deep-Sea as an emerging field in Environmental Science and Conservation. She advocates a “need and opportunity for leadership in integrating scientific knowledge with management strategies and policy solutions that protect and preserve the marine environment while allowing sustainable use of its resources.”

She is a scientific advisor for a Canadian Deep-Sea mining company, Nautilus. The company published a recent report suggesting that the deep ocean produces several billion tons of minerals each year, including vast amounts of copper. Van Dover says that just a few years ago people would have laughed at the idea of mining the deep-sea, as the challenges and costs of the technology involved were simply too great. Now she says that numerous companies are moving ahead rapidly with plans to mine copper, gold, silver and other minerals near hydrothermal vents on the ocean floor. She warns that without environmental safeguards the unique ecosystems of deep-sea vents could be severely damaged – before we even know and understand what is there. She explains that while the International Seabed Authority (ISA) has regulatory authority over the mineral resources on the seabed beneath international waters, and that they are also responsible for environmental management during the extraction of those resources, the Authority has yet to accept conservation as part of their mandate.

In her recent article in a special issue of Oceanography Van Dover states: “We have the opportunity now to put in place conservation measures that ensure these [hydrothermal vent] ecosystems are sustained and celebrated into the future as living libraries where we can continue to learn about Earth processes and biodiversity.”

Van Dover qualifies for being an honorary doctorate because not only is she associated with cutting-edge research and research excellence, but she has also prioritised sharing her knowledge with the public. She says that she wants the public to care about deep-sea environments but that they cannot care about something they do not know anything about.

Van Dover says that it is easy for the deep-sea to be “out of sight [and therefore] out of mind”. According to her there are 3 important reasons that the deep-sea is interesting. First, at sites such as hydrothermal vents we can witness fundamental processes at work. By understanding these processes we can better understand the Earth itself. Second, the unusual organisms found in the deep-sea have adaptations to extreme environments – is it possible these adaptations could be used in other situations (bio-prospecting). Third, it is important to have a complete inventory of life on the planet before humans deliberately or inadvertently destroy unique environments.

To ensure that people know something about the deep-sea she has written numerous popularised science articles including ones in Science News, Discover Magazine, and The New York Times and has been interviewed numerous times. She is the curator of a travelling exhibition and has also written 2 books; one for the general public and a textbook. (see links below)

Van Dover is a passionate proponent of the deep-sea, both due to her own innate curiosity about the unknown, but also as an educator and conservationist. In her Director’s Message on the Duke University Marine Laboratory web site she states:

“To understand marine ecosystems, we must understand many things, from the intimate biology of its benthic and pelagic species, to the interactions of individuals, populations, and species with one another and with their changing environment. Yet this is not enough. To this we must also add an understanding of how humans interact with marine ecosystems and how these interactions can and should be managed through policy and governance to achieve stewardship and a balance between conservation and exploitation.”

The New York Times: Deep in the Sea, Imagining the Cradle of Life on Earth 2007

Travelling exhibition: Beyond the Edge of the Sea...diversity of life in the deep-ocean wilderness

Deep-Ocean Journeys, a.k.a. The Octopus’s Garden published by Helix Books

The watercolour below is painted by Karen Jacobsen who collaborated with Cindy Van Dover to create the travelling exhibition, Beyond the Edge of the Sea...diversity of life in the deep-ocean wilderness.

See more images from the exhibition. 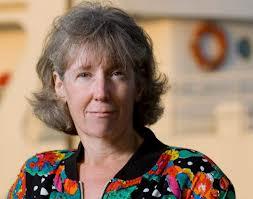