Rolf Birger Pederson has essentially been looking for this vent field for ten years. A professor of Geology at the University of Bergen, and the Leader of the Centre for Geobiology and of this cruise, he first went out on a scientific cruise on a Russian ship in 1998. It was the first cruise in the North Atlantic that went out with the dedicated purpose of looking for vents. At that time they had very rough maps and were primarily using the echo sounder in their search. They found nothing.

He has been on a cruise every year since then. Initially, because of the depth limitations of the ROV, they had to begin working over a shallow ridge. The SubMar Project succeeded in finding an extinct field on such a ridge between Jan Mayen, the volcanic island, and Iceland. Meanwhile of course Rolf Birger continued with other projects; it was not all about finding a vent field. Work was done on the microbiology, on mapping the Mohns Ridge, etc.

By 2002 he had gotten some better maps, and he was able to pick out a couple of spots that he thought would be a likely spot for a vent field. One of them was near Jan Mayen Island, where it was thought that there should be a lot of heat from the young volcanic terrain. That summer Rolf Birger found lots of evidence of methane, but the weather was bad and the research time was limited as a result.

Finally, in 2005, with a more effective ROV on board, Rolf Birger was able to begin a systematic search of the Jan Mayen area. He was actually almost ready to give up; nothing had been found. And then on the last dive, going down for one more look, they stopped near a steep wall, and it was there that the vent field was found, called subsequently the Troll Wall Vent Field. The Troll Wall turned out to be about one kilometer in length, with lots of smallish chimneys. On that same trip, the Fairy Tale (Soria Moria in Norwegian) Vent Field was discovered almost by accident. The ROV descended right next to it!

A surprise in the Jan Mayen discoveries was that there were no signs of vent fauna, something that is very apparent in other vent systems. Was it because it was too remote? Was Iceland in the way, a barrier preventing microbes from "jumping" from vent field to vent field? Was the water too shallow, or somehow too cold?

During last summer's cruise, CTD analysis showed some methane anomalies (presence of methane in the water). Our cruise returned to that same spot this year, and discovered initially that the anomaly was gone! There began our saga of two weeks: a long and painstaking search using a combination of chemical analysis, analysis of the rocks, and an understanding of the topography (Rolf Birger's particular expertise). And finally, on July 12, we found an amazing vent field.

Rolf Birger's job on this cruise is complex. He first of all has to keep us on track in the search for the vent field, analyzing all of the data we receive each day, consulting with the other senior scientists, and making the ultimate decisions as to which step to take next. If the vent were to be found, everyone would of course benefit; indeed it could make a career for some of the younger scientists. But, if it was not found, the responsibility would primarily fall on Rolf Birger's shoulders. Lots of pressure! In addition, he has to ensure that all of the scientists on board, from the most senior to the most junior graduate students, get the samples they need for their research. Each night at 7 PM we had a company meeting during which he updated us on the day's activities; at that meeting he had to fulfil yet another part of his job description: reviving spirits that might be flagging when things did not seem to be going well! In this teacher's view, he has done a terrific job.

What's next for this scientist? He plans on continuing to investigate the bigger picture of the ridge; he wants to get a larger view of this ultra-slow spreading ridge. After the stresses of this cruise, we think Rolf Birger also deserves a vacation! 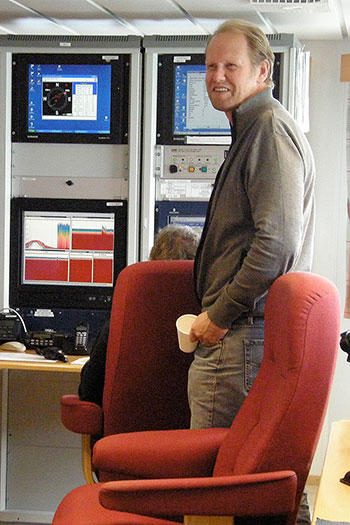