Be a virtual traveller to Jan Mayen

Jan Mayen, Norway's active volcanic island, is a very beautiful place and has a dramatic geological history that extends into the recent past. Read his reports.

Situated more that 500km in any direction from land (600km north of Iceland, 500km east of central Greenland and 1000km from North Cape, Norway) at nearly 71°N (~8°W), with rare maximum temperatures of 15°C in high summer and -20°C plus wind chill in the winter, Norway’s active volcanic island is a lonely, isolated, inhospitable place. It is also, however, very beautiful and has a dramatic geological history that extends into the recent past.

CGB PhD student Eirik Gjerløw will be stationed on Jan Mayen Island for a month summer 2011. He invites us to join him via his field journal.

Check out the reports as they arrive: First Second Third Fourth Fifth

Once a thriving whaling station (in the 17th century), Jan Mayen is currently manned year-round by a staff of around 20. The staff are responsible for the running the Loran-C navigation station, the meteorological station and maintaining the island’s infrastructure, including buildings, roads, airstrip, power station etc.

The island has two very contrasting geographical parts: a larger, roughly circular northern part dominated by the Beernberg volcano, which is mostly snow covered year round and has at least 20 outlet glaciers; and a long narrow, unglaciated, cratered southern peninsula.

Forty years ago the Beerenberg volcano surprised scientists, who suspected it of being extinct, by erupting in 1970, 1973 and 1985. Many wonder what the risks are of a new eruption today. In view of the 2010 eruption on Iceland – what kind of eruption might it be, and what kinds of impacts might there be regionally and even globally?

More about the research project

Gjerløw is part of a project to find out more. He will be dropped off in early June when a CGB research cruise passes the island, and will be collected by a later cruise. During his month or so on land he will be undertaking extensive sampling looking for material called “tephra”.

Tephra refers to all the different airborne pyroclasts produced by a volcanic eruption. It can range in size from ash (<2mm) to volcanic blocks and bombs(>64mm). Gjerløw will use the geological record of tephra layers to re-construct a volcanic history of the island, focusing particularly on the record of eruptions that can be found in the shallow coastal sediments around the island. Previous research has shown that the Jan Mayen tephra material differs from that formed on Iceland.

His research project has three parts:

(2) exploring the chronological variations in magma chemistry, and modelling of different eruption scenarios on the island and also to link the most characteristic unit on land to the tephra layers identified in the marine sediments;

(3) reconstructing the Holocene eruptive history of Jan Mayen including identifying potential eruptive cycles, calculating volumes and effusion rates of individual eruptions and modelling of some of the largest eruptive events in order to estimate near and far field hazard and risk from future eruptions on the island.

Follow along with Gjerløw’s field journal – be a virtual visitor to this unusual and extremely remote corner of Norway. 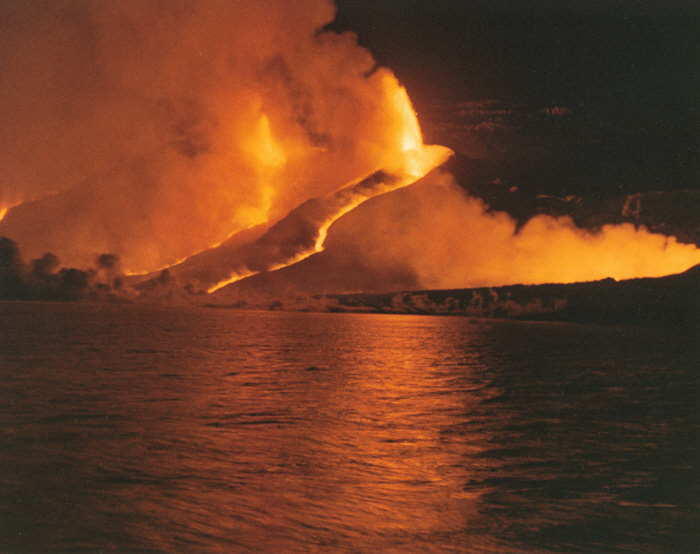