Nineteen young researchers representing all possible disciplines at UiB applied this year. Three awards were granted, and one of these was to Nicola McLoughlin, a geologist and researcher at the Centre for Geobiology. The BFS awards consist of funding for four years aimed to establish a small research group and to develop a world-class potential research theme. The funding will support not only Nicola, but enable her to hire and train a team of young researchers. Applicants for the award were evaluated by a six-person international team of experts, so Nicola’s success indicates international appreciation for the quality of her research activity – and of the future activity she plans.

Nicola McLoughlin has been a researcher at CGB since the Centre officially started in June 2007. Her capacity for hard work, her scientific vigor, her enthusiasm and her willingness to learn new things (the bio part of geo-bio!!) have impressed and motivated everyone working at the Centre.

One of the initial challenges faced by researchers at CGB was bridging the knowledge gap between geologists and biologists. Nicola was actively involved in holding “geology for biologist” seminars, and in encouraging opportunities for discussions about topics that were cross-disciplinary. Her efforts have been a major contribution to the goal of CGB to build a new generation of interdisciplinary researchers. This BFS funding will enable her to continue more concretely in this direction as she leads a small team of researchers in research investigating early Earth questions.

Nicola is the assistant leader of the Early Earth and Biosignatures theme at CGB. In 2008 researchers from this group worked with colleagues in South Africa from the Africa Earth Observatory Network, University of Cape Town, to extract 800m of rock core from the Barberton mountains. This rock core sample material is a unique resource, particularly with respect to potentially providing critical information to a number of fundamental early Earth questions regarding the earliest biosignatures, environments etc.

Over the next four years Nicola and her team will work with this core material. They will also be developing state-of-the-art techniques aimed at determining conclusive proof of abiotic vs biotic origins of the material in this rock core, enabling them also to make inferences about early Earth environments.

More can be learned about this activity: 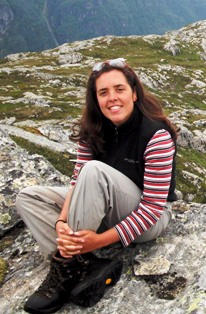