Life beneath the seafloor below the South Pacific Gyre

CGB researcher is an expert participant on an IODP cruise to the South Pacific.

For nearly two months (9 October – 13 December) Bjørn Olav Steinbø, a PhD student at the Centre for Geobiology (CGB), will be aboard the scientific drilling vessel JOIDES Resolution as a microbiology expert examining the nearly 700m of core material the cruise will be collecting.

IODP’s (Integrated Ocean Drilling Program) Expedition 329 aims to meet one of IODP’s fundamental objectives – learning more about the subseafloor biosphere. The drilling capabilities of the ship will enable them to drill through not only the seafloor sediments, but also the first 100m or so of the underlying crust. Researchers will employ a number of specialized technologies to amass as much specific and environmental data as possible.

According to the cruise plan:

The project results will address several significant questions. Are the communities in mid-gyre subseafloor sediments uniquely structured? Do they contain previously unknown organisms? What are their principal sources of metabolic energy? Do their principal activities and composition vary with properties of the surface world, such as seasurface chlorophyll concentrations or organic flux to the seafloor? Is microbial activity is sustainable in subseafloor basalt by mineral oxidation (e.g., oxidation of iron in the basaltic minerals) for tens of Myrs after basalt formation? Are microbial communities recognizably present in subseafloor basalts older than 13 Ma? These questions can be framed as hypotheses to be tested.

The results will significantly advance understanding of the subsurface world beneath the ocean.

The nature of life in sediments beneath mid-ocean gyres is very poorly known. Almost all sites where subseafloor sedimentary life has been studied are on ocean margins or in the equatorial ocean. The extent and character of subsurface life throughout most of the ocean remains largely unknown. This absence of knowledge is largely due to ignorance of subseafloor life in the major ocean gyres, which collectively cover most of the area of the open ocean.

The South Pacific Gyre is the ideal region for exploring the nature of subseafloor sedimentary communities and habitats in the low-activity heart of an open-ocean gyre. It is the largest of the ocean gyres. Its center is farther from continents than the center of any other gyre. Life beneath the seafloor of the South Pacific Gyre chlorophyll concentrations and primary productivity are lower in this gyre than in other regions of the world ocean. Its surface water is the clearest in the world. The sediments of this region have some of the lowest organic burial rates in the ocean. Our recent survey cruise demonstrates that shallow sediments of this region contain the lowest cell concentrations and lowest rates of microbial activity ever encountered in shallow marine sediments.

There are other strong advantages to an IODP expedition in the South Pacific Gyre. It contains the largest portion of the seafloor that has never been explored with scientific ocean drilling. Due to the size and uniqueness of this region, the proposed drilling will advance scientific understanding across a wide front. The basement drilling will test the role of sediment thickness in controlling hydrologic flow in ocean crust. It will help to constrain the nature of crustal inputs to the Subduction Factory. It will constrain the origin of the Cretaceous Normal Superchron and the tectonic history of a region as large as Australia. Recovery of sedimentary interstitial waters at several of the proposed sites will provide novel constraint on glacial-interglacial pCO2 models.

The principal focus of the proposed drilling project directly meets a very fundamental objective of IODP—defining the physical and chemical limits of subseafloor microbial communities. Outcomes projected by the ISP for this initiative include: (1) refinement of estimates of the global biomass in the deep biosphere, (2) evaluation of the role of subseafloor microbiota in biogeochemical cycles, and (3) constraints on the hypothesis that the deep bacterial biosphere is nourished to a significant extent by hydrogen or organic compounds produced abiotically at depth.

The proposed expedition will allow scientists to document the processes that sustain microorganisms challenged by extraordinarily low availability of electron donors (food). It will test the hypothesis that the deep bacterial biosphere of low-activity sediment is nourished by hydrogen of abiotic origin (radiolysis). It will greatly refine estimates of global biomass. It will document how the redox potential (chemical habitability) of subseafloor basalts and the water that flows through them evolves over nearly 100 Myrs in a very-low sedimentation environment. 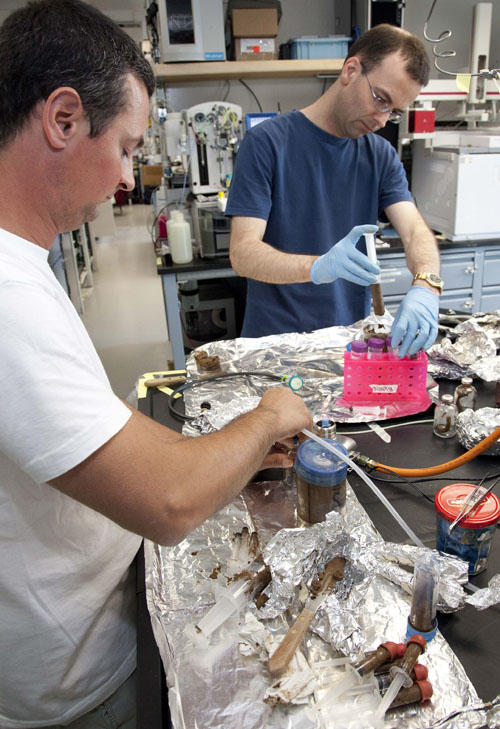 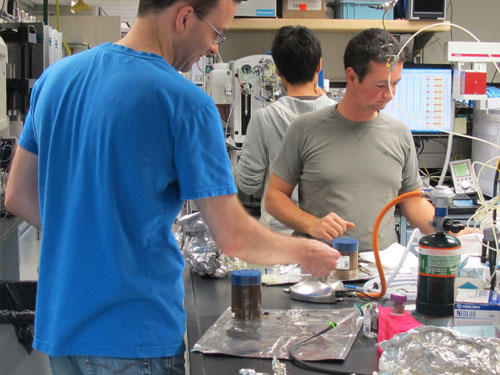 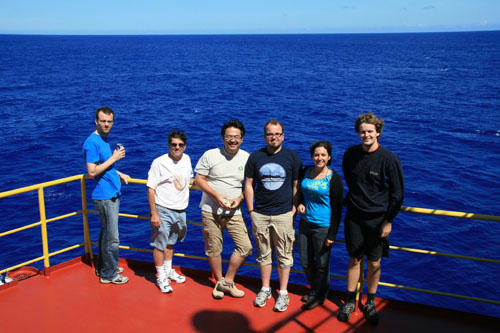 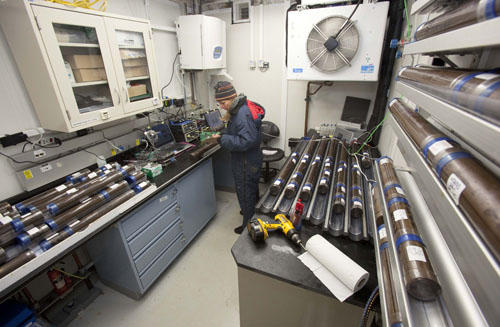