Drilling Back 3.5 Billion Years to the Bedrock of Life

(from Geoviten-ekstern 18.12.2009) Our planet is a work of life. Biological and geological processes have been inextricably linked since life first emerged on Earth. Learning more about when and where life first evolved is central to understanding how geobiological systems have shaped our planet. The answers to these questions are preserved in sparse and fragmentary early Archean rocks that contain highly altered traces of life. This has lead to heated controversies regarding the oldest verifiable evidence of life on Earth, the metabolisms of these microorganisms and the environments that they inhabited.

To address these questions scientists from the Department of Earth Science and Center for Excellence in Geobiology at the UiB undertook a scientific drilling operation in 2008 in the ~3.3-3.5 billion year old Barberton Mountain Land of South Africa - one of only a few places in the world with well-preserved early Archean rocks. Working with colleagues from the Africa Earth Observatory Network (AEON) at the University of Cape Town, 800m of near continuous drill core was recovered and is now stored in matching halves for teaching and research at the Universities of Bergen and Cape Town. Three different stratigraphic intervals were targeted to intersect horizons that record evidence of early Archean volcanic, atmospheric and marine processes and especially, their interaction with the early microbial biosphere.

The drill core forms the backbone of this project with the well constrained geological context and exclusion of recent weathering processes avoiding many of the problems that have hampered previous studies of surface samples.

The initial findings of this Barberton Scientific Drilling Programme including the core logs are reported in Grosch et al. 2009. In addition, the story of our ongoing research in the Barberton Mountain Land is told in an educational movie entitled: "Bedrock for life on a young earth - searching for our planets earliest life forms".

Research lead by Prof. Harald Furnes in the Barberton Mountain Land reported micron-scale tunnels in the glassy rims of pillow lavas argued to represent the ‘footprints' of rock-eating microorganisms (Furnes et al. 2004). These ‘footprints' were first discovered by Earth scientists at UiB studying modern seafloor lavas and have lead to the realization that there is a global sub-seafloor biosphere that leaves textural and chemical ‘footprints' of this hidden microbial world. The Barberton drill hole KD2b contains a cross-section through an Archean sub-seafloor pillow lava sequence that may represent the bedrock for the emergence of life on earth.

We are currently undertaking detailed microscopy coupled to chemical and isotopic analysis of this drill core to further investigate the metabolisms of the microbes that created these microbial ‘footprints'. Moreover, the continuous cross section through the sub-seafloor preserved in the drill core will make it possible for the first time to map changes in their shape and abundance with depth and to build a picture of this primordial subseafloor ecosystem.

Another of the Barberton drill holes KD1 targeted seafloor sediments known as cherts interbedded with seafloor lavas. Carbonaceous matter within these cherts is of disputed biological origin due in part to the difficulties of distinguishing decayed microbial remains from abiotically generated carbon. The environment of deposition of such cherts is also hotly debated, ranging from hydrothermal environments to ‘normal' marine conditions with major implications for the paleo-temperature of Archean seawater and the lifeforms that may have inhabited this ocean.

A range of textural and chemical tools are therefore being used to ask: what types of microorganisms inhabited the oceans c3.4 billion years ago and under what conditions did they live? Ongoing investigation of the Barberton drill cores over the coming years will greatly improve our understanding of Earth's earliest environments and the origins of life. An important outcome of this work will be improved criteria for seeking life in a range of ancient geological environments and perhaps on other planets.

Educational movie: "Bedrock for life on a young earth - searching for our planet's earliest life forms" contact Harald Furnes to request a copy. 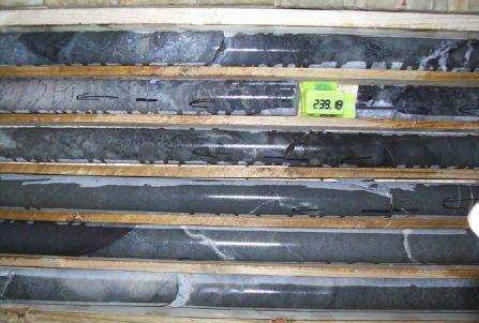