It is not uncommon in Earth and environmental sciences that we need to study chemical and isotopic composition of solid samples on sub-microscopic scale. This is because many minerals and biological samples are heterogeneous and it is those variations on small scale that provide the most valuable information about the sample’s formation and history. For this reason, geologists have often been the driving force of technical developments in microanalytical chemistry.

The grain is enclosed in feldspar, Barun gneiss, and is from eastern Nepal.
Photo:
GEO

One such technique uses energetic laser beam to ablate small volumes of solid sample for isotopic analysis by plasma source mass spectrometry (LA ICP-MS). It is not surprising that since the first publication on the use of LA ICP-MS 25 years ago1, most of the published work has been in the Earth and environmental science and since 3 years ago, over 60% of publications recorded in the GeoRef database deal with LA ICP-MS dating of accessory minerals using the U-Pb isotopic system.

U-Pb isotopic dating of zircon, monazite, titanite and other accessories has always been one of the key applications at BGF. We have made important contributions to the development of LA ICP-MS dating technique2,3 and in 2003 we were the first laboratory that established automated dating of detrital zircons which significantly improved its application to sedimentary provenance studies.

We are involved in development and distribution of internationally recognized reference materials4 for U-Pb microanalysis and, in collaboration with the International Association of Geoanalysts (IAG) and the EARTHTIME program, we contribute to establishing the common and internationally recognized analytical procedures. Recent projects in sedimentary provenance include studies of the Norwegian continental margin, origin and evolution of the Jan Mayen microcontinent, provenance of sedimentary rocks in eastern Greenland, evolution of the Gondwanan margin in the north-central Andes and tectonic history of northern Graham Land in western Antarctica. In 2009 we succeeded in using laser ablation ICP-MS to constrain the age of what is the oldest directly dated morphological evidence for life on the Earth. Tubular channels formed by microbial activity in ancient volcanic glass in the Barberton Belt in South Africa are filled with mineral titanite and its U-Pb dating confirmed the existence of a sub-oceanic biosphere in the early Archean (at least 3.34 Ga ago).

We use the laser ablation ICP-MS in several biological and environmental projects to reveal environmental changes in the past. In -situ analysis of trace elements in fish ear bones (otoliths) provides a composition record of the water if which the fish live. This is a great tool that helps biologists and marine ecologists to trace the migration of various fish species, including cod and herring and will hopefully help to preserve their stock in future.

Similar to the fish, the migration of humans in the past can also be traced by in-situ chemical analysis of the teeth recovered from archaeological sites. We are now collaborating with Department of Clinical Dentistry at UiB and Department of Anthropology at the University of Western Ontario in studying human migration using teeth recovered from excavations in Bryggen in Bergen. While plants do not migrate like fish or humans, they can provide an archive of atmospheric pollution in the past.

We were recently involved in laser ablation ICP-MS study of Pb isotopic composition in spruce tree rings from the heavily polluted areas of Central Europe. Contrasting isotopic composition of the major Pb sources in the environment (continental crust, ore smelting, leaded gasoline and burning of brown coal) allowed documenting their changing contribution to the atmosphere over the 70 years lifespan of the tree with a time resolution better that 1 year.

With number of projects finished and many ongoing, our plans for future are to focus more on the fundamental research of the laser ablation process. The goal is to improve the spatial resolution of laser ablation analyses so that even smaller domains in mineral grains and biological samples can be analyzed for Pb isotopic variation in spruce tree rings from Central Europe.

The micrographs show a laser ablation track (0.6 mm long) in the darker (winter) part of a tree ring elemental and isotopic composition without compromising precision and accuracy of the measurements. This will extend our capabilities in isotopic dating, improve time resolution in geological and environmental studies and lead to new projects on elemental and isotopic partitioning in minerals, fluid inclusions and biological compounds. Ultimately it will result in better data quality and more exciting projects for users of the BGF laboratories. 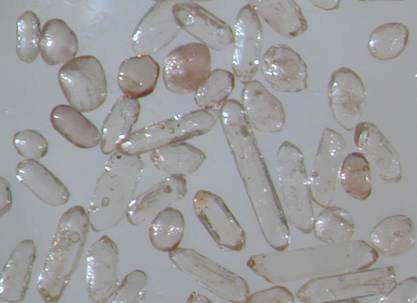 The elongate grain in the centre of the photograph is ca. 0.2 mm long.
Photo:
GEO