CGB scientists Cedric Hamelin and Kristian Haaga are aboard the French IFREMER’s research vessel the Pourquoi pas?, investigating the detachment fault system at 13 degrees North on the Mid-Atlantic Ridge.

The ODEMAR cruise began in Mindelo (Cabo Verde) on the 16th November 2013, and will finish at Point-a-Pitre (Guadaloupe, France) on the 19th December 2013, after about 26 days of field work at the Mid-Atlantic Ridge. On this expedition the Pourquoi pas? has onboard the IFREMER’s ROV Victor 6000 (France), and GEOMAR’s AUV ABYSS Remus 6000 (Germany) to collect their deep sea data.  The scientific team is comprised of 40 scientists and engineers mainly from France, but also from Germany, United States, Wales, Spain, Norway, and Greece.

The aim of the cruise is to study the formation of the oceanic crust along the ridge, in the presence of oceanic detachments, which are long-lived faults that bring to the surface deep-seated rocks (from several kilometers below) while taking up an important portion of the on-going separation of the American and African continents (~20 mm per year). These detachments can produce curved, smooth and striated massifs raising hundreds of meters above the seafloor. During their formation magmatic activity, tectonic deformation (seismicity) and hydrothermal alteration interact, and the rocks exposed at the seafloor are the witnesses of these interactions. The cruise scientists seek to investigate and unravel these interactions to understand the formation of these structures, which are common along the global mid-ocean ridge system.

Follow the scientists’ expedition through the cruise blog and the science blog onboard. 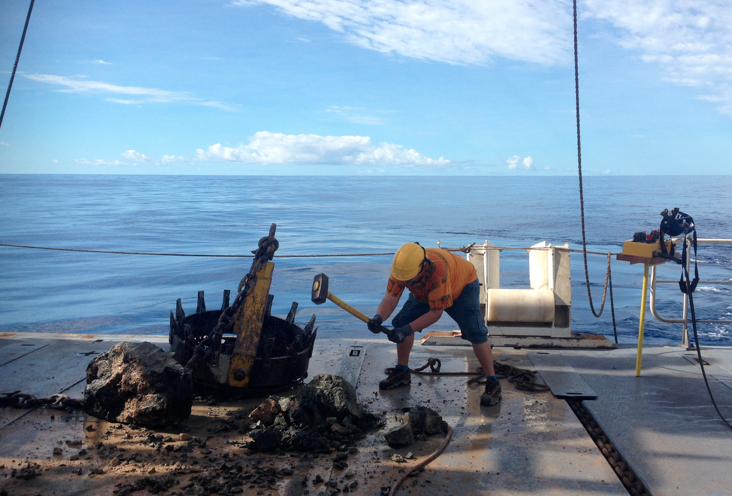