Analytical investigations of the Barberton Scientific Drill core are now in full swing. Back in summer 2008 scientists from CGB and the Africa Earth Observatory Network (AEON), at the University of Cape Town, S Africa extracted 800m of drill core containing rock material from the early Archean, a very important but little studied period in early Earth’s history.

Half of this unique sample material lies at UiB, the other half at AEON. The initial drilling results were published in the Journal of Scientific Drilling in 2009 and CGB researcher Nicola McLoughlin and AEON PhD student Eugene Grosch are now analysing the material more in depth. Grosch is visiting UiB again to access the Geoanalytical Facility here and more specifically, to use the Laser Ablation ICP-mass spectrometer. This instrument will allow him to study zircon crystals in the core and accurately date some of Africa’s oldest sediments.

The Archean period is one of the four eons in Earth’s history. It is generally said to have begun around 3.8 billion years ago and extends forward to around 2.5 billion years ago. This period raises many questions and provides few answers so Early Earth researchers are particularly interested in the information the Barberton Scientific drill core may reveal. The Early Earth is thought to have been hotter with extensive volcanic activity and there was no oxygen in the atmosphere. Much of the rock material from this period comprises metamorphosed sediments and volcanic rocks. Scientists would like to know: what degree of metamorphic changes these rocks have undergone? What were the pressure and temperature conditions these rocks have experience? What kind of fluid regimes have they been subjected to? These are the kinds of questions Grosch is trying to answer and work together with McLoughlin will help to understand how these metamorphic conditions may affect the traces of life preserved in these rocks.

The drill core is the first scientific drill core to ever have been extracted from the Barberton Greenstone Belt (BGB) in South Africa. The material is 3.5 to 3.2 billion years old – a time when the first life-forms may have been emerging on earth..As McLoughlin points out, there are a few other places on Earth where rocks of this age can be found on the surface. What makes the drill core particularly exciting and unique is that for the first time relatively pristine unweathered rock material has been accessed for study.

As the researchers begin the work of analysising the core rock in detail, they are developing and perfecting tools and protocols that can be used for the whole 800m of core (!) and for other early Earth rock samples. Some of the layers may have been on the surface during the Archean and may they tell us what Earth’s early atmosphere was like? The work from this data phase of the Barberton Scientific drilling project will set priorities for future research in the Barberton Greenstone Belt of South Africa and other Archean terrains..

When asked how things are going, McLoughlin and Grosch, are pleased about the new techniques they are developing, and feel that they are beginning to crack some of the secrets that the core contains. They also realise that these 3.5 billion year old rocks have some very complex stories yet to tell. Grosch will return to UiB for an extended stay at the end of the year as part of the Yggdrasil programme. He hopes that he will be able to complete his PhD then!

Two recent scientific papers where McLoughlin and Grosch were authors:

Earth's early evolution and the conditions under which life first emerged are highly controversial topics. Did Venus-type tectonics dominate the early Earth, with vast landscapes of hot spot volcanoes belching lava and gases into a tenuous carbon dioxide/methane-rich atmosphere, or was plate tectonics already in operation? Debates rage about when water first became dominant across Earth's surface, the temperatures and depths of early oceans, and when the first protocontinents began to form. These large uncertainties confound scientists' understanding of ecological niches available for the emergence of simple life, and a quantifiable image of the early Archean world is still missing.

In the Barberton Scientific Drilling Program (BSDP) we successfully completed three drill holes in 2008 across strategically selected rock formations in the early Archean Barberton Greenstone Belt (BGB), South Africa. This collaborative project’s goal is to advance understanding of geodynamic and biogeochemical processes of the young Earth. The program aims to better define and characterize Earth’s earliest preserved ocean crust shear zones and microbial borings in Archean basaltic glass, and to identify biogeochemical fingerprints of ancient ecological niches recorded in rocks. The state-of-the-art analytical and imaging work will address the question of earliest plate tectonics in the Archean, the δ18O composition, the redox state and temperature of Archean seawater, and the origin of life question.

The original core log image (a simplified version lies below) was created by Grosch et al. 2009. You can find it in both articles linked here. 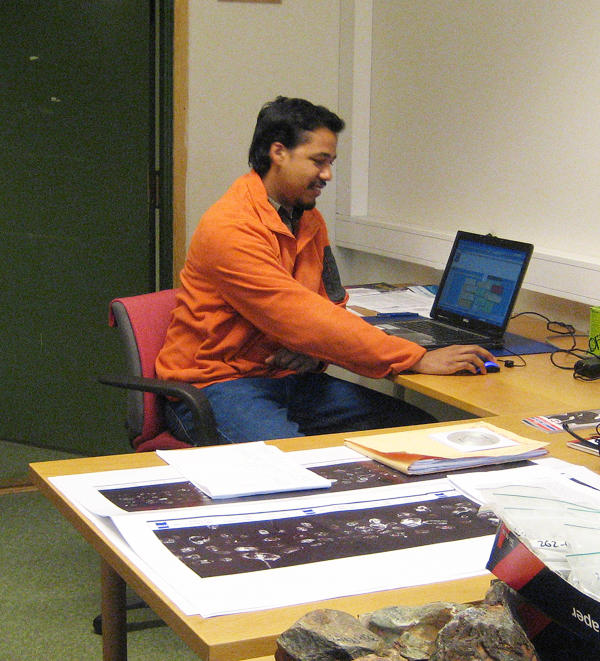 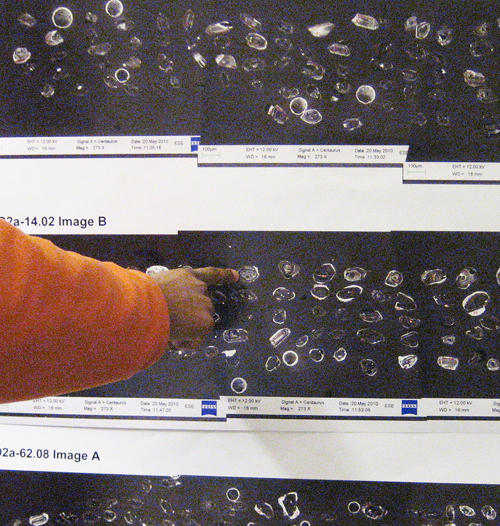