The final details are being organized for this summer’s research cruises.

The first part 24 June – 2 July, led by Haflidi Haflidason, will employ the Calypso coring technology to extract up to 20m sediment cores. The second part 5-20 July will stop briefly at the Håkon Mosby Mud Volcano and Loki’s Castle for sample taking before heading north and west along the Knipovich Ridge to look for new sites of hydrothermal activity using AUV technology to support the traditional CTD and ROV work.

The goal of the first part of this summer’s cruise is to take several Calypso cores from different target locations. CGB researchers are most interested in cores from the rift valley in the Mohn's and Knipovich ridges; from near Loki’s Castle and northwest along the Knipovich Ridge. The Calypso corer on the G.O.Sars is capable of taking cores that are up to 22m deep. However, successful deployment of the Calypso corer requires good weather, a great deal of technical skill – and a little luck with location!

CGB researchers, supported by the H2Deep Project, are interested in learning more about the sediment history: physical data such as layer composition and temperature gradients, fluid composition from the different zones and information about any changes in the composition of the biosphere with depth. The data will provide more information about the hydrothermal and water-rock interactions in this area, as well as potentially unique information about the deep biosphere here. Tamara, Kirsten, Ingeborg, Shanshan, Steffen and Frida Lise will represent CGB on this leg. UiB coring expert, Stig Monsen will be along to lead the coring work.

Learn more about the Calypso corer and about the H2Deep project.

The second part of this summer’s cruise will be led by CGB leader Rolf Birger Pedersen. It will head back to the Håkon Mosby Mud volcano and Loki’s Castle for some sampling, before heading north and west for its main target: surveying the Knipovich Ridge for hydrothermal activity. This summer the G.O.Sars will deploy an Autonomous Underwater Vehicle (AUV) similar to the one employed this spring by the James Cook when researchers found the deepest black smokers yet discovered in the Cayman Trough in the Caribbean Sea. AUV’s can provide tremendous support for search activities. Outfitted with mapping technology and chemical and physical sensors, they can be programmed to undertake specific search patterns over the sea floor autonomously while researchers can be engaged with other tasks aboard ship.

Discoveries such as Loki’s Castle and the shallow vents near Jan Mayen have shown that hydrothermal venting does take place on slow spreading ridges, such as the arctic ridges, and that venting may be a more ubiquitous activity along ridges than previously believed. Discoveries such as Lost City in 2000 have shown that venting may occur at other kinds of geological sites and be driven by other kinds of thermal activity than volcanic activity. Lost City is driven by exothermic water-rock interactions (learn more) and researchers will be studying this summer’s longer Calypso cores for historical evidence of both kinds of venting activity. 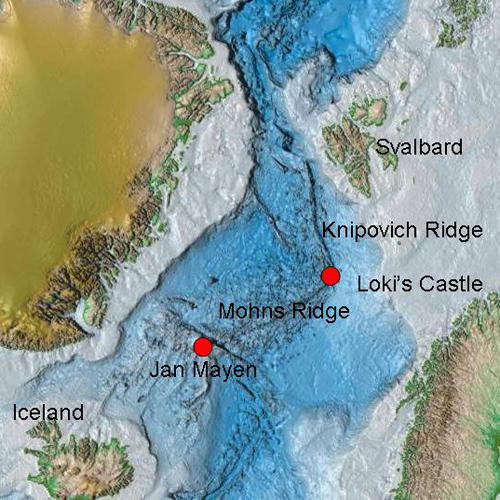