The Centre for Geobiology together with the Nordic Network of Astrobiology hosted an international conference “Biosignatures across Space and Time” between May 20 and 22nd. Over 100 conference delegates from more than 19 countries attended the 3 day meeting, with 50 oral presentations and 36 poster presentations on different aspects of biosignatures in extreme environments, in the early rock record and in extraterrestrial environments.

Group photo of the attendees of the three-day Biosignatures Across Space and Time conference
Photo:
CGB

The three day scientific programme promoted lively discussions and scientific interaction on wide ranging topics. Highlights of the scientific programme are reviewed below. Each day began with an introductory lecture by a leading astrobiologist that presented the interdisciplinary topics to everyone. Our Mars rover and conference mascot kept enthusiastic speakers to time, driving towards those who had too much to say and went over time! Young scientists enthusiastically participated in the conference programme, and exciting new results were reported by many speakers. Conference organisers and CGB scientists Drs Nicola McLoughlin and Eugene Grosch would like to thank all who took part in the conference.

Day 1 was devoted to prebiotic molecular synthesis and the characterization of atmospheres and organic molecules on distant planets and stars. Prof Xander Tielens (Leiden University, the Netherlands) presented the introductory lecture on “Biosignatures in astronomy and planetary science”—a survey of observational efforts to detect distant organic molecules. Subsequent talks focused on locating exoplanets including results from the new ALMA telescope (Jes Jørgensen, Copenhagen), characterizing planetary atmospheres (Nikku Madhusudhan, Cambridge), and a fascinating talk on the habitability of the satellites of Jupiter and Saturn (Hunter Waite, South West Research Institute). The day’s final session centered on remote sensing data from Mars, with new data from CRISM and surface environments by Janice Bishop (SETI, USA) and the martian subsurface by Joseph Michalski (Natural History Museum, London, UK). That evening, Professor Robert Hazen of the Carnegie Institution, USA presented the Mat Nat Horizons public lecture, “The Co-Evolution of the Geosphere and Biosphere,” which stimulated wide ranging questions on his theory of mineral evolution and discussion from the audience.

Day 3 focused on life in extreme environments and the deep biosphere. Charles Cockell (University of Edinburgh) began the day with a stimulating plenary lecture on the limits of life and the concept of “uninhabited habitats”. This was followed by John Parkes (Cardiff University, UK and CGB scientific advisory board member) who reviewed “Microbial life in the deep biosphere” with a survey of recent results on the extent of the deep biosphere. Subsequent talks on “Linking abundance of prokaryotes and geochemical parameters in deep-sea marine sediments” (Steffen Jørgensen, UiB postdoc), “Water-rock interactions and microbial life within the ocean crust” (Wolfgang Bach, CGB Prof II), and “Formation of H2 during low-T alteration of ultramafic rocks” (Ingeborg Okland, UiB postdoc) explored the forefront of deep biosphere research. Geochemical properties and microbial life of hydrothermal systems provided the focus of the day’s second session. Chris German (Woods Hole Oceanographic Institute, and CGB scientific advisory board member) considered hydrothermal systems as “Oases for life on Earth and beyond”, and was followed by a talk on hydrothermal vents form the Norwegian-Greenland Sea presented by Tamara Baumberger (CGB, postdoc). John Parnell (University of Aberdeen, Scotland) examined biosignatures in the deep oceanic and terrestrial biosphere, followed by interesting case studies by a number of other speakers. The day concluded with a session on biosignatures in extreme environments. Kathleen Campbell (University of Auckland, New Zealand) described the preservation of biosignatures in diverse hot spring deposits from New Zealand and Patagonia. Further speakers explored such diverse lithologies as microbial carbonates (Fernando Gomez, Universidad Nacional de Cordoba, Argentina), alkaline lake sediments (Lise Øvreås, UiB), and barite chimneys (Ida Helena Steen, UiB) in their search for preserved signs of life.

The conference came to a close with a very enjoyable dinner at the Fløyen folkerestaurant, with the summer fog lifting and a spectacular evening sunset. Overall, the conference was very diverse and stimulating. One conference delegate commented “I enjoyed the meeting hugely! It was exactly a nice size, with a splendid cross-section of names and novelties”. Another commented “so many interesting and engaged people together in a beautiful place”. Tusen takk til alle! 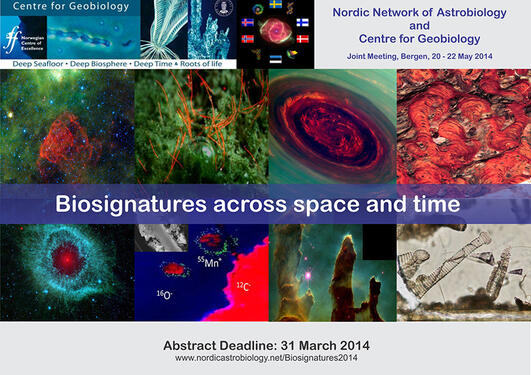 Biosignatures across Space and Time

An international conference “Biosignatures across Space and Time” is being hosted by the Centre for Geobiology and the Nordic Network of Astrobiology. The meeting will take place from 20 to 22 May 2014 in the Egget Auditorium, the Studentsenteret at the University of Bergen. 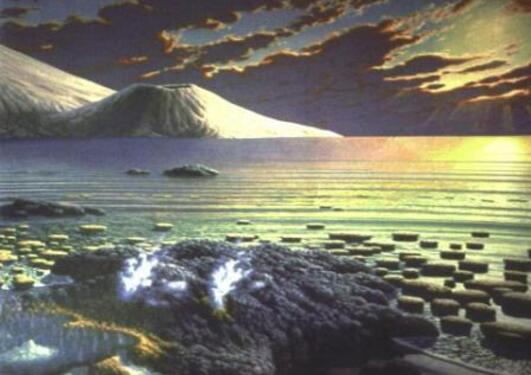