Deep-sea hydrothermal vents are extreme environments for life. They represent one of a few ecosystems on Earth where life is based on chemosynthesis instead of photosynthesis.

Biotechnology is continually searching for new bio-catalysts to help make many industrial processes more efficient. Such little-explored and inaccessible communities as those discovered around deep sea hydrothermal vents provide unique opportunities for searching for new enzymes.

Incubators filled with krill shells, wood pulp and wheat grains –complex organic carbon sources – were placed at sites near the deep-sea vents along the Arctic Mid-Ocean Ridge. The incubators were set out for a period of one year, first in 2011, and again in 2014. These incubators were then taken up again the following summers, 2012 and 2015, respectively.

After recovery, the communities that grew in the incubators were subjected to metagenomic studies aimed at enzyme mining. The krill-containing incubation chamber community studies revealed 9 near-complete organism genomes, 3 of which were related to organisms known to degrade organic substrates.

The results demonstrated that this approach is an effective one for enzyme mining in these deep-sea hydrothermal vent communities.

Chemosynthesis is the process whereby the energy for life and the available carbon is primarily produced by means of chemical reactions. Hence, the microbial communities in chemosynthetic ecosystems are often dominated by chemolithoautotrophs. These are microorganisms that derive the energy they need for life from chemical reactions (chemo); the chemical reactions involve oxidation-reduction, and the electron donors are inorganic compounds (litho); the carbon source is also inorganic (auto). Finally, the “troph” means “eater”.  The chemolithoautotrophs around deep-sea hydrothermal vents utilize H2, CH4 or H2S as energy sources. 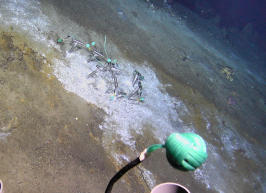 Incubators in place on the sea-floor.
Photo:
CGB
Related content 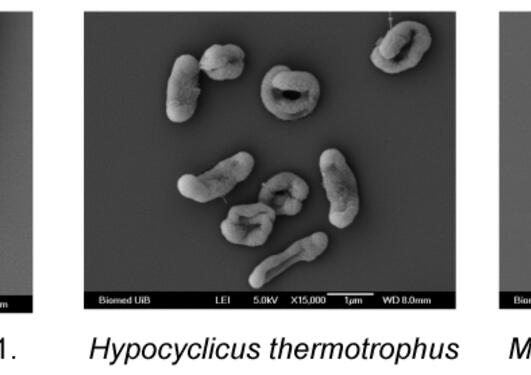 Microbiologists estimate that maybe as little as less than one percent of all microbial species have been described. 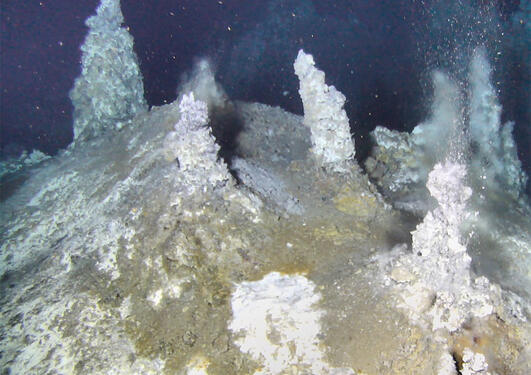