Ocean heat transport links subpolar and Arctic warming, but that is not the whole story, writes Aleksi Nummelin. Read his account of how he, Camille Li and Paul Hezel worked to solve a climate riddle.

With global warming some regions heat up more than others.
Photo:
Aleksi Nummelin

Ocean heat transport links together the subpolar and Arctic warming – but it’s not the whole story. About a year ago Camille, Paul and I realized that something was missing in our understanding of the ocean’s role for Arctic warming, and it was time to find out! Here is our story:

One of the robust features of global warming under increasing greenhouse gas concentrations is that different places warm at different paces.

We set out to answer these questions by exploring climate model simulations over the ongoing century. We started out by constructing a heat budget for the global ocean in the Norwegian Earth System model (NorESM), a fully coupled ocean-atmosphere model used in Norway. The model results clearly agreed with the observational data; the ocean was warming fastest in the midlatitudes and in the Arctic.

So why such a pattern? The next step was to look into the exchange of energy through the ocean surface in NorESM and in other climate models.

It turns out that the fast warming in each region had its own cause.

In the northern midlatitudes, the ocean warms quickly because more sunlight reaches the surface ocean. This happens because the subtropical high pressure region to the south expands northward and pushes away the cloudy skies.

This northward expansion of the subtropical high pressure region is really another somewhat complex story, but a short version goes roughly like this: Normally air rises in the tropics and descends in the subtropics, but global warming generally forces air upward (warm air is light) and acts against the descending motion in the subtropics. Since the air has to descend somewhere the descending branch of the circulation simply moves further north. NorESM simulations also revealed that, as a response to the circulation changes in the atmosphere, the whole subtropical ocean gyre moves slightly northward as well.

The Arctic Ocean is warming because it receives more heat from the subpolar oceans, which are warming because they are losing less heat to the warming atmosphere above. This was one of the important results of our study as we noted that the Arctic ocean warming was linked to the subpolar atmospheric warming, and not to the mid-latitude ocean warming.

In order to understand the subpolar to Arctic linkage in detail it helps to first consider the annual mean picture of ocean-atmosphere interaction at these northern latitudes. In the mean the relatively warm ocean loses heat to the relatively cold atmosphere above. However, under global warming, the atmosphere warms much faster than the ocean surface and as a result the ocean heat loss weakens. In a way the atmosphere does not need as much heat from the ocean as it did before and the ocean is happy to keep the heat. The extra heat does not remain in the subpolar oceans, but it is delivered to the Arctic by ocean circulation, not unlike the way the rapidly warming midlatitude Southern Ocean has been gaining its extra heat.

Indeed, last year Armour et al. showed that an atmospheric warming signal in the subpolar Southern Ocean moves to the rapidly warming southern midlatitudes with the equatorward ocean circulation. Our analysis of the climate model results show that locally in the rapidly warming southern midlatitudes, the atmosphere even acts against the ocean warming as the surface ocean loses an increasing amount of heat to the atmosphere.

With these results at hand we got excited. There was an oceanic linkage from the subpolar region to the Arctic that could potentially also link the atmospheric warming in these two regions.

As noted in the very beginning, one of the robust features of global warming is the relatively slow warming in the tropics and relatively fast warming in the Arctic. This phenomenon is known as Arctic amplification, and it is caused by several rather well understood mechanisms, although their relative importance is still discussed.

What is less well understood, however, is why models disagree on the amount of Arctic amplification that occurs under global warming. The most recent climate model estimates span a range between 2 to 5 times more warming in the Arctic than in the tropics.

Since one of the causes of Arctic amplification is the reduction in sea ice cover, we hypothesized that the mechanism connecting the subpolar region and the Arctic could be the following: As the ocean loses less heat to the atmosphere in the subpolar region, it remains relatively warm as the waters flow to the Arctic. The warmer waters flow northward and consequently the ocean also freezes up much further north, pushing the sea ice edge northward.

Because the atmosphere receives more heat from open water than from ice covered ocean, the atmospheric warming is amplified in the areas of sea ice loss. With this possibility in mind we went back to the climate model results and noticed that a reduced subpolar heat loss was indicative of an increase in the ocean heat loss in the Arctic, leading to strong Arctic amplification.

The ocean connected the Arctic to the subpolar region! After this realization, the pieces of the story started to fall in place.

As the atmosphere warms over the subpolar region more heat is left for the ocean to carry to the Arctic. Part of the extra heat carried by the ocean is released back to the atmosphere within the Arctic, explaining some of the differences in Arctic amplification between the models.

While we were unable to pinpoint a reason for the strong connection we hope it serves as an inspiration for future studies.

If you'd like to read more about this, the full article is here. 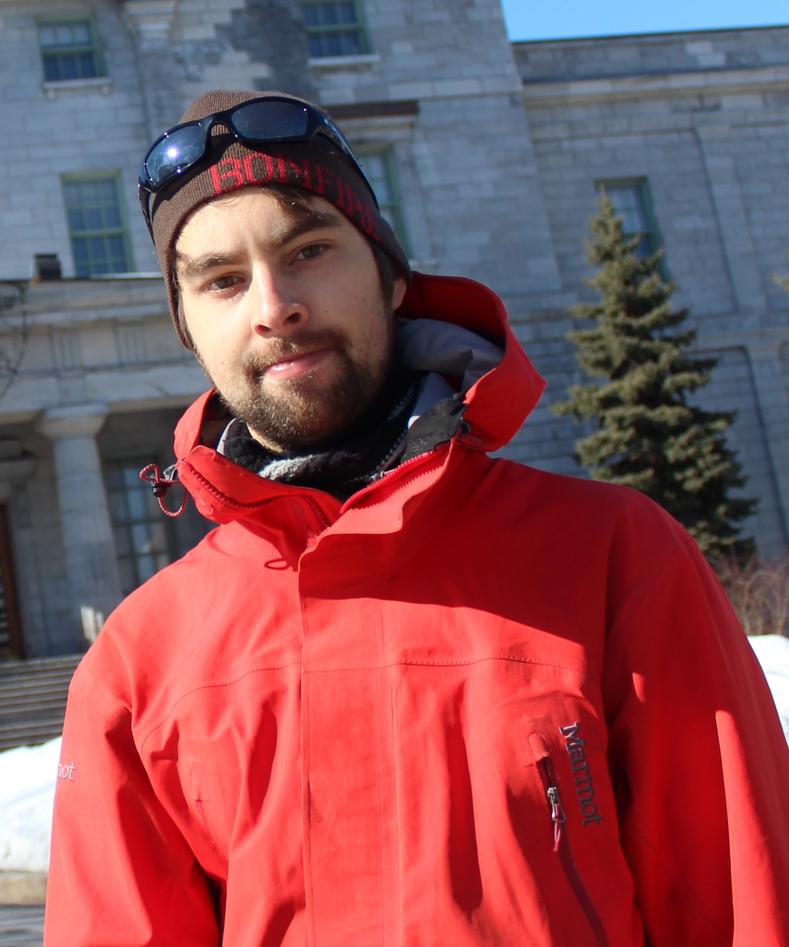 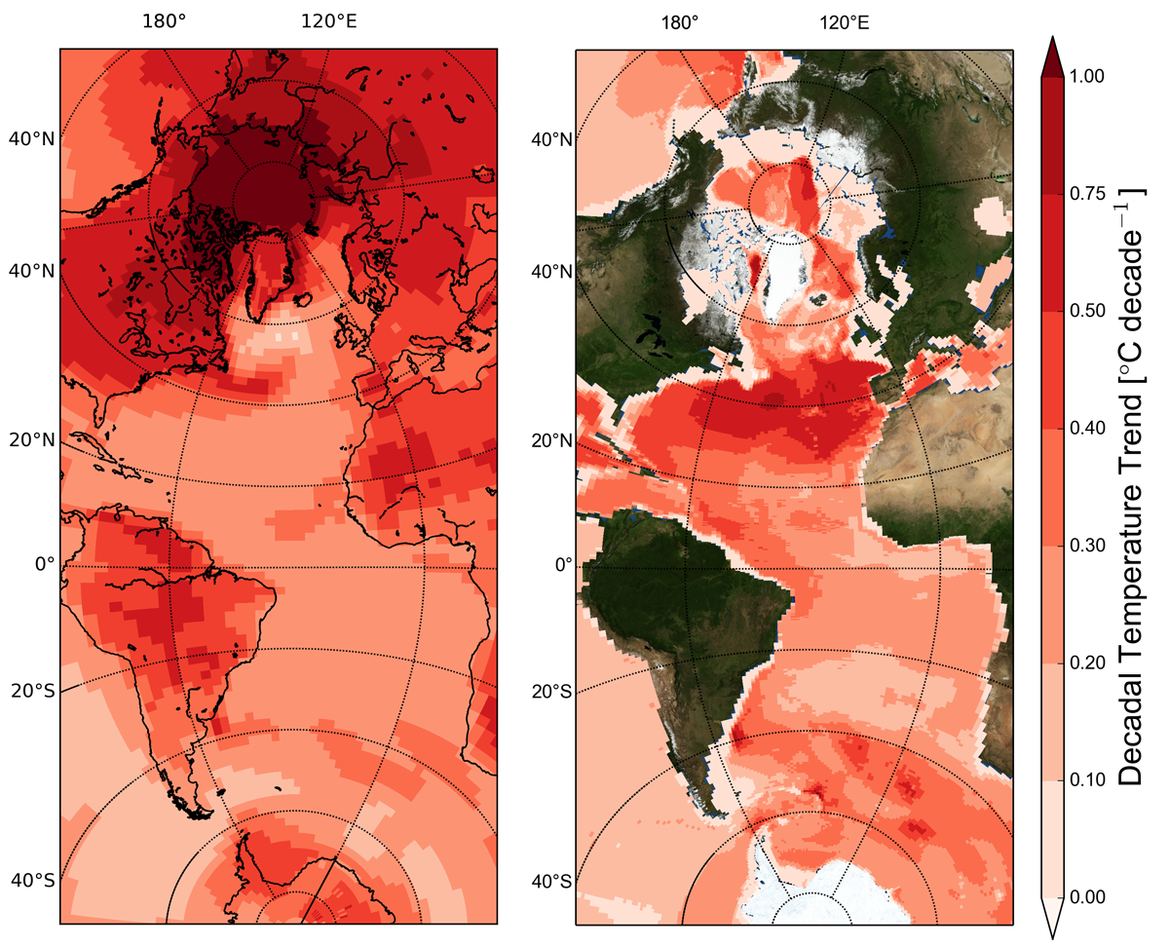 Temperature change per decade in the air (left) and the surface of the ocean (right) between 2005 and 2100, as projected by the Norwegian Earth System model under a strong emission scenario (RCP8.5). Notice the rapid ocean warming at around 40S, 40N, and in the Arctic, in contrast to the surface atmospheric warming mainly in the Arctic.
Photo:
Aleksi Nummelin 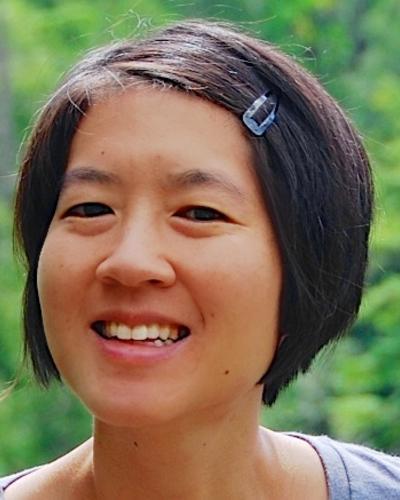 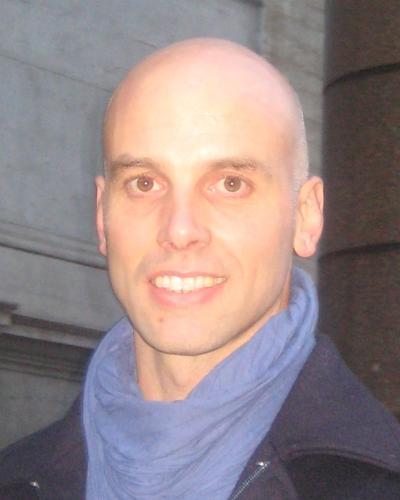 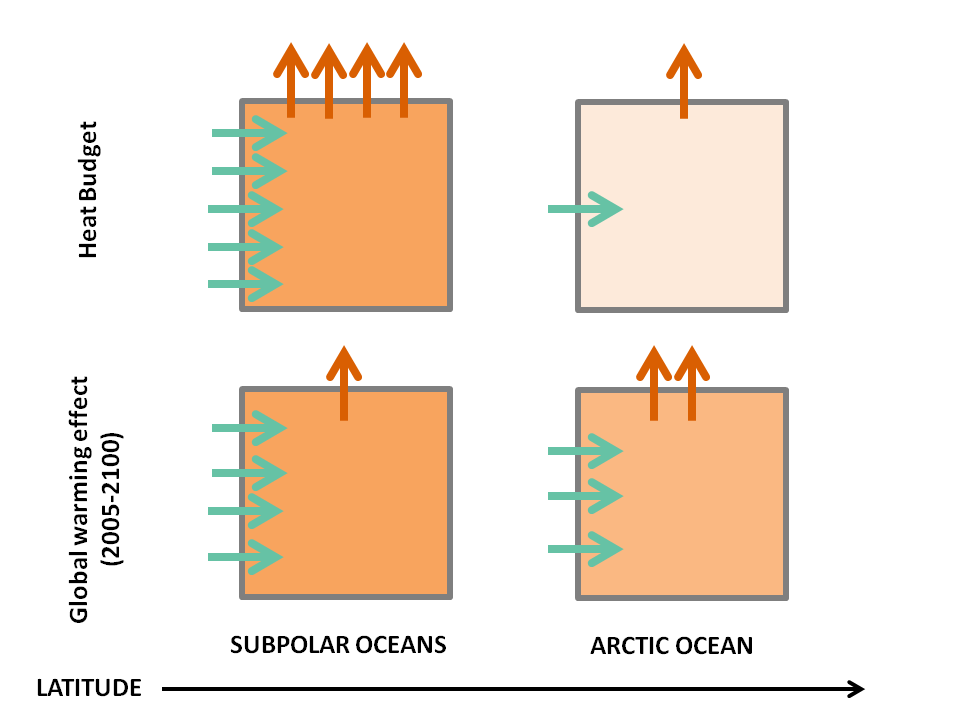 Ocean heat budget in the Northern Seas. Intensity of the color in each box indicates its heat content (a darker color corresponds to a larger heat content), green arrows indicate ocean heat transport, and orange arrows indicate surface heat exchange with the atmosphere. The upper two panels correspond to a state without greenhouse warming where the ocean transports a large amount of heat to subpolar latitudes where most of the heat is lost to the atmosphere. In this case the ocean carries only a small amount of heat to the Arctic. The lower panels illustrate the global warming effect on this system. In the warmer future less oceanic heat reaches the subpolar latitudes because of the slow down of the ocean circulation, but the dominant effect is the weaker surface heat loss owing to the atmospheric warming. Therefore, the ocean carries a significantly larger amount of heat to the Arctic, where part of the heat is lost to the atmosphere, and a part contributes to ocean warming.
Photo:
Aleksi Nummelin