The distrution of a radioactive Thorium isotope is important in multiple aspects of oceanograpy. In his new single author publication, Yiming Luo has revisited the issue on processes influencing the distribution in the water column.

230Th is an important radioactive nuclide used in multiple aspects of oceanographic research. To understand its distribution is important, and with his new paper, Yiming Luo has revisited this issue.
Photo:
Gudrun Sylte

The Thorium-230 isotope in the marine sediment is used for paleo researchers to calibrate and normalize particle fluxes of past times. The isotope is present both in the water column and in the ocean sediments, the latter being the item for marine paleo geologists to examine.

Together with the isotope 231Pa, they provide important information on the ocean overturning circulation. But there is a problem with regard to the basis of the application of sediment 231Pa/230Th, which is equally fatal to the 230Th normalization.

He is a postdoc at the Geophysical Institute UiB and the Bjerknes Centre for Climate Research. Recently his paper ”Reinterpretation of oceanic 230Th profiles based on decadal export productivity (2003-2010)” was published in the Scientific Reports, a research journal by the Nature Publishing Group.

The paper is something as uncommon as a single authorship, and Luo regard the work as a pilot study, referring to future work on the thorium isotope.

In this pilot study, Luo has been looking at processes influencing the thorium isotope distribution in the water column.

Two important processes are influencing the 230Th distribution in the water column.

One is scavenging, which includes the productivity by the algae in the surface ocean and removal of 230Th with the settling organic matter, and resuspension of marine sediments that causes enhanced 230Th scavenging in the bottom water. Another process is circulation, which disturb the linear distribution of 230Th with water depth in the equilibrium status of 230Th scavenging .

– What process is most important? We assume the scavenging, and there is no consistent way to parameterize the scavenging rate, in order to interpret the 230Th signals. As a result, the theories used to explain the 230Th distributions vary from one site to another, Luo says.

The solution he suggests in his paper, is a way to determine the scavenging of 230Th in the water column. He has established an empirical equilibrium-state 230Th scavenging correlation versus estimates of export productivity from the years 2003-2010.

“This correlation demonstrates the relationship between 230Th-scavenging intensity and EP in the absence of advection.  With this correlation, other 230Th profiles from global oceans are reinterpreted”, he writes in the publication abstract.

– First, the uncertainty of 230Th distribution interpretation is reduced, as the profiles are explained pretty well. Secondly, we now can calculate the 230Th scavenging by the productivity, Yiming Luo explains.

For future modeling and analyzing the 230Th distributions in the ocean, the new parameterization serves as a first step to better elucidate the ocean circulation in the past. 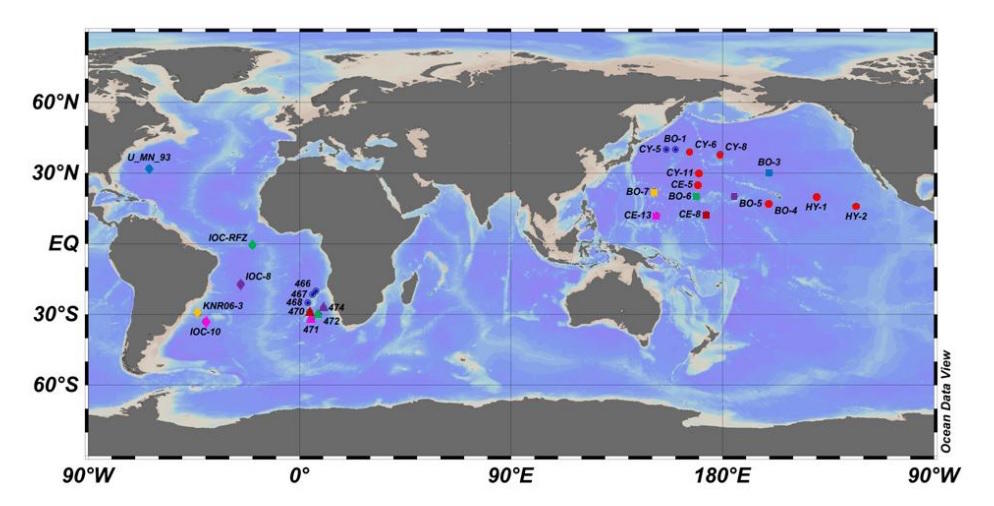 Map for the stations where (230Th)t data are available and compiled in this study. Data are retrieved from previous publlications30-31,35-36, 45-48. (The profile location colors and symbols correspond to colors and symbols used in figures 4-7.) Figure made with Ocean Data View.
Photo:
Yiming Luo