Turbulence measurements on its way

Pursuing its task for the exploitation of offshore wind energy as a natural sustainable energy source, NORCOWE bought two systems for measuring turbulence in the atmospheric boundary layer.

In collaboration with the National University of Ireland the system has been assembled in Galway. In December 2010 NORCOWE PhD-student Martin Flügge has visited the partner in Ireland to gather first experience with NORCOWEs new system.

- I think the system will strongly contribute to an increased understanding of the marine atmospheric boundary layer. The first tests have shown that the system is easy to put up and we hope that we eventually can mount it on a floating platform, Flügge said.

In addition to our new instrumentation a similar system has been put up by our partners in Ireland.

- The third system in Ireland will be mounted at the bow of a scientific vessel. Together, the information of all three turbulence systems will provide us with valuable information of the marine atmospheric boundary layer. This is a field scientists still have to explore.

Flügge also revealed that both he and his supervisor Joachim Reuder hope that the new systems can be used for a joint field campaign involving turbulence groups from Norway, Ireland and the USA.

The system delivery and the first test in Norway are planned for January 2011. 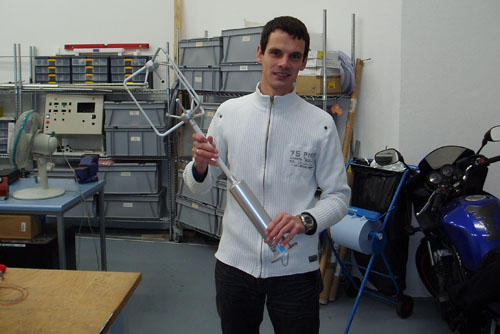