Within the field of numerical integration of differential equations, the traditional focus has been that of devising stable numerical methods, whose error is minimal in some norm.

In the last decades, the focus has shifted to devising numerical methods that preserve the qualitative attributes of the underlying problems. An example is that of Hamiltonian equations. Such equations describe many energy-preserving physical systems, for example the solar system and the trajectory of particles in an accelerator. Hamiltonian equations possess fundamental geometrical attributes that are important to preserve under numerical discretisation and simulation. Energy preservation and preservation of the symplectic structure are important criteria in the design of good integrators for such systems, see also http://en.wikipedia.org/wiki/Symplectic_integration.

In Geometric Integration (http://en.wikipedia.org/wiki/Geometric_integration), we are generally interested in preserving important geometrical attributes of classes of differential equations. In the construction and analysis of geometrical integration methods, we often employ ideas from differential geometry.

The research activity in Geometric Integration in Bergen started around 1995, with the first articles that systematically established the theory for Lie-groups integrators. A Lie group is a continuous transformation group that acts on the space of solutions of differential equations. As a basic example, consider the equation that describes a trajectory on a sphere. In this setting, we can use rotations to update the numerical approximation from one point in time to the next. In this manner, we obtain numerical solutions that are guaranteed to produce trajectories on the sphere. Classical methods for numerical integration of differential equations can be generalised to arbitrary Lie groups. Then, the classical methods become a special case of the new methods by letting the group action be translations in Rn. The challenge in the theory of general Lie group integrators is that the theory becomes more complicated than the classical one because the group action is non-commutative, e.g. rotations on a sphere. In collaboration with the University of Cambridge (UK) and NTNU (Trondheim) we have established a systematic theory for Lie group integrators and generated practical numerical methods that are also efficient from a computational point of view. 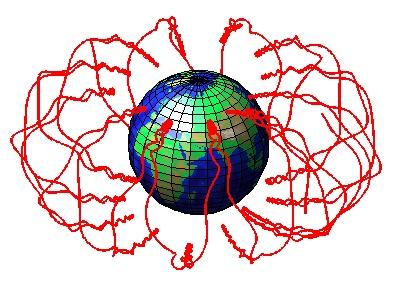