Professor Lise Øvreås takes over from Peter M. Haugan as Academic Director of Ocean Sustainability Bergen, UiB's centre for sustainable ocean research, with scientific advice being one of the main tasks in her portfolio.

In January 2018, the virtual centre Ocean Sustainability Bergen (OSB) was established at the University of Bergen (UiB). One of its main tasks is to promote and channel scientific advice from UiB's research environments towards international bodies (primarily the UN system) and national authorities.

Professor Peter M. Haugan from UiB's Geophysical Institute was the centre's first Academic Director, but has now left UiB for a position at Norway's Institute of Marine Research. The new OSB Academic Director is Professor Lise Øvreås from the Department of Biological Sciences (BIO).

“I am excited to work on this important subject and to lead OSB forwards. It is with great humility that I take over from Peter M. Haugan,” says Øvreås.

Øvreås is a microbiologist and a merited ocean scientist, with a particular focus on microbial diversity in the Ocean. She is a former vice-dean at the Faculty of Mathematics and Natural Sciences and was a founding member of the Centre for geobiology, a former Norwegian Centre of Excellence (SFF) supported by the Research Council of Norway.

With a diverse background in science diplomacy and scientific advice, she is perfectly positioned to take OSB into the future. Currently she is acting vice-president of the Norwegian Academy of Science and Letters (DNVA) and is the academy's representative in the European Academies' Science Advisory Council (EASAC).

A substantial part of the new OSB director's portfolio will be to lead the day-to-day work with UiB's status as a Hub for SDG14, Life Below Water, for both United Nations Academic Impact (UNAI) and the International Association of Universities (IAU). This will happen in close collaboration with the SDG Bergen Task Force, with Professor Edvard Hviding as its Academic Director. The SDG Bergen Task Force was established by the UiB leadership to act on the university's engagement with the UN's Agenda 2030.

“The link between UiB's leadership in academia on scientific advice and the Sustainable Development Goals is important for the university sector nationally,” says Lise Øvreås, before pointing out that Annelin Eriksen, UiB's vice-rector for global relations and head of the steering group for SDG Bergen, also leads the national committee for Agenda 2030 in the university sector in Norway.

It will be an intense start for the new OSB Director, who is in Paris on 28-30 January to represent UiB in a IAU SDG Cluster workshop at UNESCO, where the implementation of the SDGs in academia will be top of the agenda. At the same time, the IAU SDG Cluster workshop will contribute even further to position UiB as a world-leading university in Ocean research. 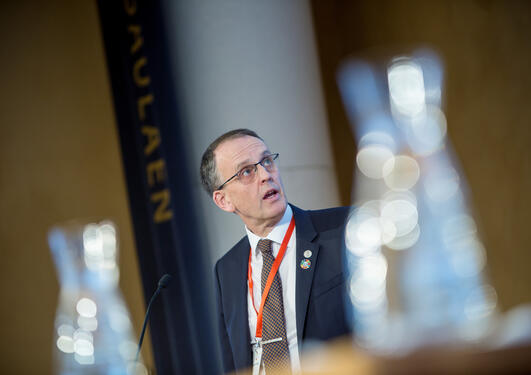 Earlier this autumn Peter M. Haugan was appointed member of the expert group for the High Level Panel for a Sustainable Ocean Economy. He is now preparing to attend the first meeting - in his hometown Bergen.