Ocean literacy key to progress for a sustainable ocean

How can scientific knowledge on the treasures of the ocean contribute to informing policy? This was the key topic at the second Ocean Sustainability Bergen Conference.

On 11 November 2020, the second Ocean Sustainability Bergen (OSB) Conference took place as a hybrid conference, with a live broadcast from the University Aula in Bergen and virtual contributions from ocean scientists, students, diplomats, government advisers and research administrators from all over the world.

More than 400 ocean enthusiasts had registered for the conference, which was titled Treasures from the Ocean and where the discussion was on food, medicines and genetic resources from the ocean.

“For this conference, we have assembled a great team of national and international experts to discuss how to get ready for the Decade of Ocean Science, which starts next year,” said Øvreås, “we offer science to policy-makers to take the decisions we need for better ocean management.”

Rector Dag Rune Olsen from the University of Bergen in particular highlighted the need for more ocean literacy and how the university sector can contribute to this.

“One of humanities great challenges is the need for more sustainable ways of producing food and medicine, and we know that the ocean can provide this,” said Rector Olsen, “however, we also know that we know very little about the ocean. This is why we need to look at what role universities can play in raising ocean literacy.”

In his opening note, Minister of Local Government and Modernisation Nikolai Astrup spoke about his own experiences dealing with plastic pollution everywhere from Norway to Ghana, underlining the global nature of plastic pollution.

“Illegal and unregulated fishing threatens fish stock and marine ecosystems worldwide. Costing the world billions. The time to act is now. We need a clean and productive ocean, to strike the right balance between production and protection. Clean seas are rich seas,“ said Minister Astrup.

The minister also praised the University of Bergen’s work in ocean science and sustainable development, including its partnerships globally.

“I’m glad that the University of Bergen has established a centre for sustainable ocean research and that you arrange conferences like this. Mankind needs clean oceans – let’s make it happen,” he urged.

The UN Secretary General’s Special Envoy for the Ocean, Ambassador Peter Thomson, who is also an honorary doctor at the University of Bergen, gave the annual Ocean Sustainability Bergen Lecture.

Elaborating on the subjects touched upon by Rector Olsen and Minister Astrup, Thomson spoke about the blue economy and urged financial actors worldwide to invest in the ocean economy.

“The global financial system should think of this as an economic opportunity and realise the major role they can play in the new ocean economy,” said Ambassador Thomson.

He has long been a champion of the role of science to inform the implementation of SDG14, Life below water.

“For the last two years the University of Bergen has been the SDG14 Hub for United Nations Academic Impact (UNAI). Recognising the university’s prominent profile in climate and marine science, said Ambassador Thomson in the lecture.

“This is not just fine titles. Without the will and dogged determination, the University of Bergen would not have achieved what is has on SDG14. I want to commend the leadership at the University of Bergen and Ocean Sustainability Bergen and all at the university who are involved in the SDG14 Hub. It is incredible what has been achieved during this difficult time,” he said with reference to the COVID-19 pandemic.

As well as the SDG14 Hub status for UNAI, he was referring to a number of University of Bergen initiatives and partnerships: Leadership for the SDG14 Cluster of the International Association of Universities (IAU), a joint Norway-Pacific Chair of Ocean and Climate Change, the One Ocean Expedition (a circumnavigation of the world on board tall ship Statsraad Lehmkuhl) and, most recently, a Norway-funded programme to train 24 new PhD candidates from across the Pacific in ocean science. The latter administered in collaboration between the University of Bergen and the University of the South Pacific. 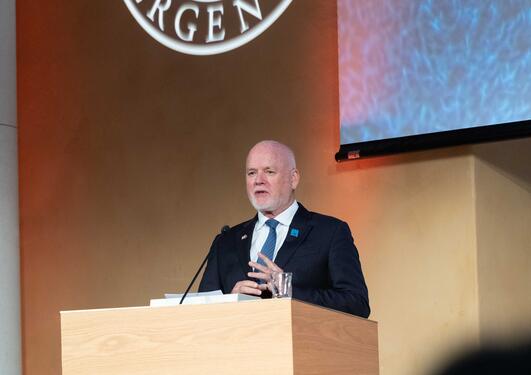 Making tough decisions for the ocean

“A new deal for nature is on everyone's lips,” said Ambassador Peter Thomson in his public lecture after becoming an honorary doctor at the University of Bergen. 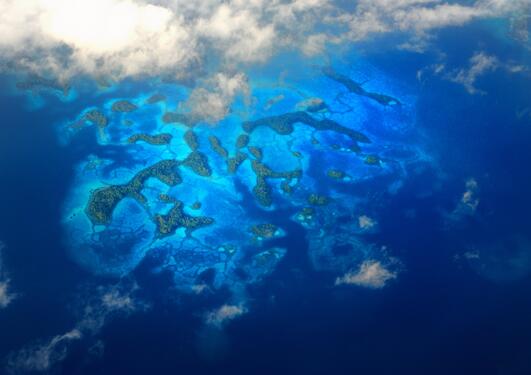