“Addressing climate change and ensuring sustainable use of the ocean still remains a priority for Norway. In fact, the current pandemic, and recent cyclones underline the need for genuine and long-term partnerships,” said Ulstein in a special virtual event on 28 April 2020.

The Norway-Pacific Ocean-Climate Scholarship Programme (N-POC) is an ambitious and interdisciplinary partnership in research and PhD training between long-term partners the University of Bergen (UiB) in Norway, and the regional University of the South Pacific (USP).

“We are climate focused ocean states, with a common understanding of the importance of the ocean-climate nexus. To save our ocean, we need to base policy on the best available science. Someone must develop this science. That is a job for our excellent universities, in the Pacific and in Norway,” said the Norwegian government minister, “I am delighted that the cooperation over decades between the University of the South Pacific and the University of Bergen is now taken to a whole new level.”

“Our two universities have developed a fine history of collaboration in both ocean and climate research and education across a number of disciplines,” said UiB’s Rector Dag Rune Olsen, “in the complex fields of research like sustainable development, climate change and ocean research, both our universities see the importance of interdisciplinary approaches.”

The UiB rector’s thoughts were echoed by USP’s Vice-Rector and President Pal Ahluwalia, who acknowledged the Norwegian Government, the Norwegian Ministry of Foreign Affairs and the Norwegian people for funding this science initiative on the ocean-climate nexus.

“I am very proud that we stand together in this partnership in a field of research where we both have so much to offer and so much at stake in terms of the impacts of climate change on our countries and the changes that are taking place to the ocean environment in the different oceanic regions in which we live,” said Ahluwalia.

The new programme builds on previous collaborations between the two universities, including a November 2016 visit by Rector Olsen to Fiji and USP.

“I am proud and glad for our equal, long-standing partnership with the USP, which today enters a new dimension,” said Olsen about the close partnership between the two universities, “our universities share the conviction that the ocean is central to understanding the urgent challenges posed by climate change.”

The two universities presented a voluntary commitment to establish the Norway-Pacific Joint Chair of Oceans and Climate Change at the inaugural UN Ocean Conference in June 2017.

“The University of Bergen has for many years been our academic partner in this broader people to people partnership between nations. In recent times, we took that partnership to a new level with our Agreement to create a jointly funded professorial position in “Oceans and Climate Change,” said Ahluwalia during the launch of the new PhD programme, “not content with that exciting outcome of our partnership, we continued to work together to develop this new scheme for postgraduate study in the same field.”

He made explicit reference to UiB Professor Edvard Hviding, who has been a driving force in the Norway-Pacific collaboration. First doing his anthropological fieldwork in the Pacific since 1986, then leading the EU supported ECOPAS project and currently the scientific director for both SDG Bergen Science Advice and the Mare Nullius project, funded by the Research Council of Norway and like N-POC an interdisciplinary collaboration between UiB and USP. The world-leading Bjerknes Centre for Climate Research is a key N-POC partner and has long been part of UiB's collaboration with USP.

“Today we are launching a substantial package to reinforce the partnership on science and education,” Minister of International Development Ulstein told the guests in the virtual launch, “about 24 students and researchers at doctoral level get funding to dig deep into the science, and provide us with data and research we need for sound policymaking.”

He expressed his excitement with the new programme, not the least the strong critical engagement with the Sustainable Development Goals (SDGs) and UiB’s leading role on SDG14, Life below water, through the university’s Ocean Sustainability Bergen virtual centre.

“Together we produce tomorrow’s scientific leaders within climate and ocean. We go beyond words and promises – this is partnership in action,” said Ulstein in his address.

The three main objectives of the N-POC programme are: 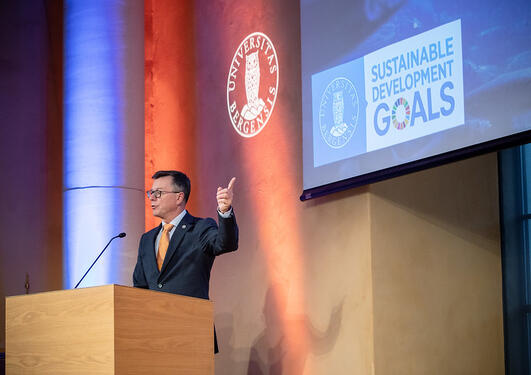 On 28 April 2020, the Norway-Pacific Ocean-Climate Scholarship Programme (N-POC) is launched in a virtual event hosted by Norway's Ministry of Foreign Affairs. N-POC is a groundbreaking new and interdisciplinary PhD programme in ocean and climate science, in a collaboration between Norway and the... 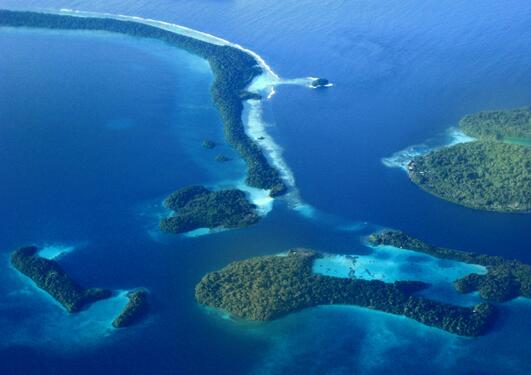 Social anthropologist Edvard Hviding is one of three University of Bergen researchers to receive five years of major funding from the prestigious Toppforsk programme, awarded by the Research Council of Norway, for his project Mare Nullius.