Students and staff from the Department of Social Anthropology, and invited guests attended the Fredrik Barth Memorial Lecture 2017 given by Dr. Madeleine Reeves from the University of Manchester.

In her introduction this year's Fredrik Memorial lecturer, Dr. Madeleine Reeves, recounted her first encounter with Fredrik Barth's work. "I came across a copy of Ethnic Groups and Boundaries during early graduate work in the 90's. It was strictly prohibited to write comments or underline sentences in library books. As you can see, nobody cared", Reeves explained, followed by laughter from the audience.

Dr. Madeleine Reeves' work has long focused on the way in which state space and state categories are produced and ruptured in everyday life in Central Asia. During the Fredrik Barth Memorial Lecture 2017, Dr. Reeves took the audience along the Kyrgyzstan's borders with neighbouring Uzbekistan and Tajikistan. She situated state desire as an anthropological object of enquiry through an engagement with Barth’s theory on scale. Her starting point was a critical engagement, through the lens of scale, with recent ethnographic literature that has taken the production of legal exceptions as the starting point for an anthropology of contemporary sovereignty.

The annual Fredrik Barth Memorial Lecture was institutionalised by the Department of Social Anthropology at the University of Bergen in 2015, in connection with the department’s 50th anniversary, and to honour its founder, Professor Fredrik Barth. The invited scholar to give the lecture can be a young, promising researcher or an established academic but should in some way or other be concerned in his or her work with those regions and topics explored by Fredrik Barth.

Nearly 70 students, anthropologists and others attended this year's lecture. They all were invited for refreshments at 'Muntlig' after the lecture. Inspired by Dr. Reeves' talk they engaged in lively discussions and anthropological queries.

We are grateful to Dr. Madeleine Reeves for giving The Fredrik Barth Memorial Lecture 2017, and everyone who attended! 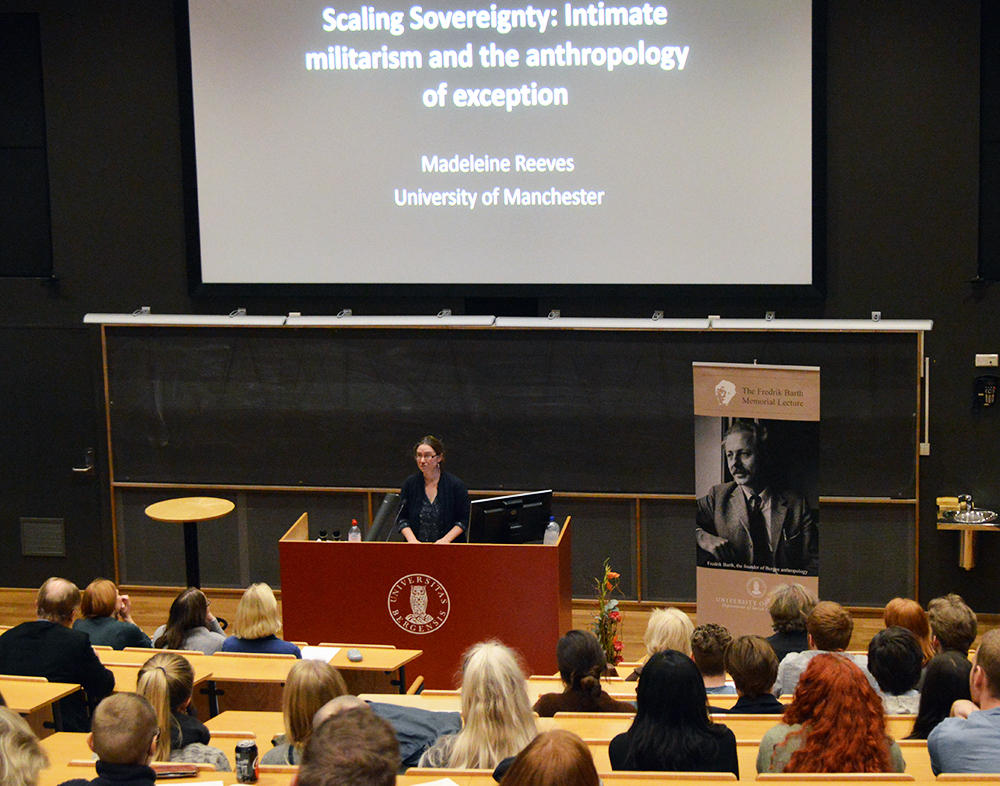 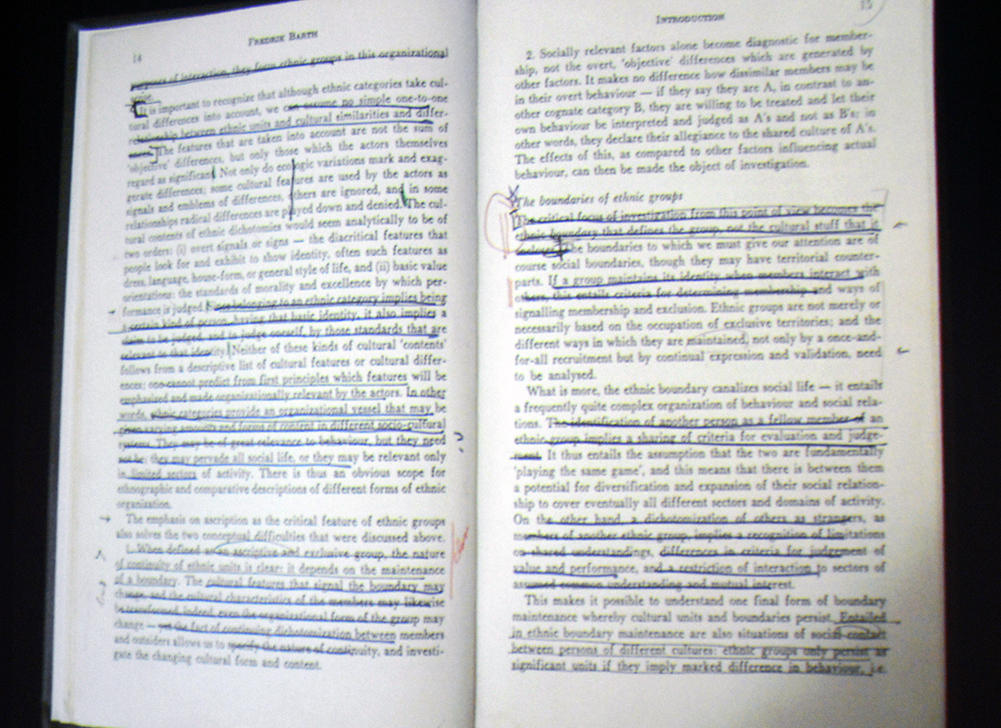 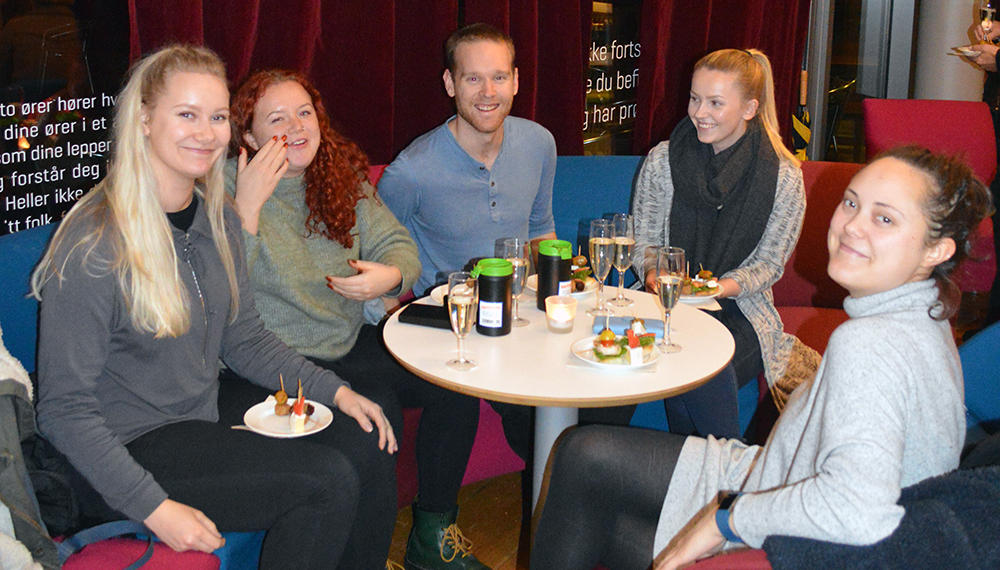 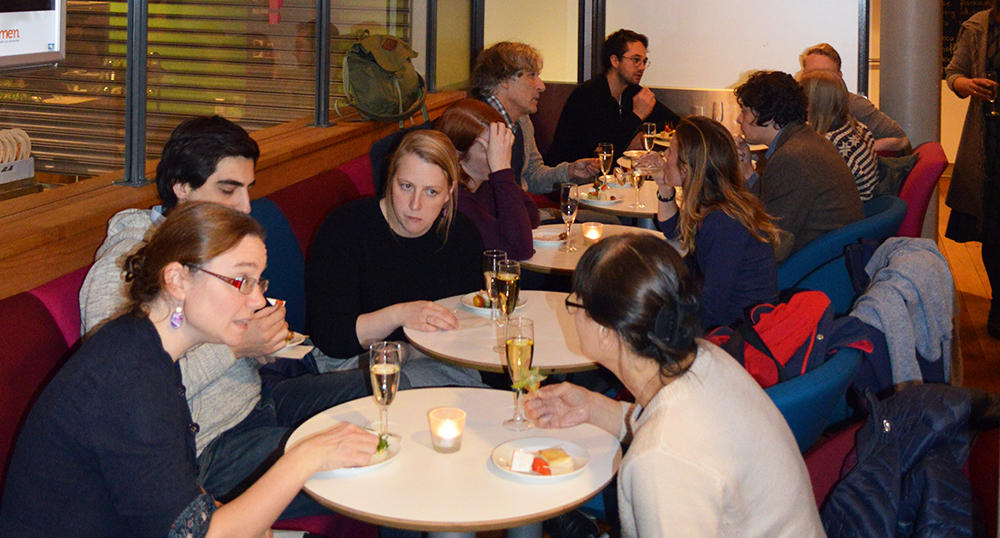 ...staff and other invited guests engaged in anthropological mingling after the lecture.
Photo:
Dept. of Social Anthropology, UiB
Read more

The title of this year's lecture is "Scaling sovereignty: intimate militarism and the anthropology of exception".