Learning Not to Take Things for Granted: The Anthropology of Oil

Kula Kula is an independent social anthropological journal run by students at the University of Bergen, and this semester's issue is just out. PhD Candidate Marianna Bettis lectured the popular course "The Anthropology of Oil" spring semester 2018. In this article, that you can also find in Kula Kula, she explains how oil has changed our past, is leading our present and shapes our future.

PhD Candidate Marianna Betti is the lecturer in this semester's con amore ("with love") course SANT285-1 "The Anthropology of Oil". The course was popular among both international and Norwegian students - and the fieldtrip to Mongstad was one reason for that.
Photo:
Isabelle Hugøy

By Marianna Betti and Introduction by Sofie KullerudPublished: 03.05.2018

This spring semester, Marianna Betti arranged a course called "The Anthropology of Oil" for 10 credits. The course consisted of seven lectures, inviting the students into the highly interesting and current subject. The course did not just consist of lectures. Betti had arranged a fieldtrip to one of Statoils (Equinor) biggest hydrocarbons process facilities, Mongstad, located outside of Bergen. The fieldtrip gave the students an opportunity to ask questions directly to Statoil employees, to observe the refinery and its surroundings with a critical eye, and to connect this experience to the course literature and our everyday life. By arranging this fieldtrip, Betti invited the students to conduct participant-observation, which is the main type of data collection method used by anthropologists. As a soon-to-be master student, looking forward to the fieldwork for my Masters, I personally enjoyed and learned a lot from this experience. "The Anthropology of Oil" is one of the subjects, which have taken my interest in anthropology to a higher level, both theoretically and methodologically. For the sake of the students who did not have the opportunity to take this course, I hope that, given the importance of the subject, "The Anthropology of Oil" will reappear in the course-selection.

The Anthropology of Oil

Dependency and Democracy. Climate Change and Anthropocene. Neoliberalism and Capitalism. Dutch Disease and Resource Curse. These are some of the controversial big discourses and concepts that I wanted to discuss with my students during the new con amore course, “The Anthropology of Oil”. My name is Marianna Betti, I am a PhD candidate at the Department of Social Anthropology at UiB. My doctorate research focuses on the impacts that oil operations in Turkana, a poor and marginalized area of Northern Kenya, have on social relations at different scales. I have conducted fieldwork in Turkana since 2009, the first time I went there for fieldwork for my master in the “Anthropology of Development”. In 2009, Turkana was a god-forgotten semi-arid region of Kenya, where only humanitarian agencies, NGOs and missionary groups took an interest in it. The central government of Kenya seemed inexistent and the majority of Turkana people who are still practicing nomadic pastoralism, lived in unimaginable conditions of need and neglect. However, when oil was “discovered” in Turkana in 2012, Turkana came to the spotlight and quickly gained international interest. Turkana attracted big foreign investors. For the first time, people outside Kenya and even outside Turkana started learning about this remote and hostile land in a more positive way. Kenya was now proud of Turkana and its magnificent and precious resources, hydrocarbons. The magic of oil could in fact bring development, modernization, well-being and change the fate of a nation overnight. Dominic Boyer, an anthropologist from Rice University, argued that energy, and especially energy deriving from fossil fuels, is almighty in our modern society. He calls the power of energy, “energopower”. In fact, not only we need energy in immense quantities every day to run the machine that basically sustains us. “Energopower” pervades every aspect of our daily lives: from what we eat, drink and wear, to the medicines we take, to the way we travel, to the jobs we do, to the entertainments we use, to the way we build our shelters and grow and raise our food and our children, to the objects we need to make us healthy, attractive, social, happy, alive, useful good citizens of our western world. Nobody cared about Turkana until the power of the perspective of oil started fueling people´s imaginations of the quintessential good life.

Through my course I wanted mostly to teach two aspects of the hydrocarbons industry and discourse: first of all, I wanted the students to understand how complex and pervasive oil is. We have seen case studies of oil pervasiveness all around the world. How the oil industry has entered and affected politics, economy, social relations and values, natural environment, even beliefs and identity. Oil has changed our past, as our history seemed to be remembered mostly on the technological and ideological progress enabled by hydrocarbons, as well as on the geopolitical decisions of the past, which, since not even 150 years, have been taken on the bases of the interests of developing the oil industry. Oil is leading our present, making us highly addicted and extremely vulnerable. And oil is shaping our futures: our fears and expectations, our hopes and our obliviousness. Geographer Michael Watts, call the oil discourse, an “oil complex” because so complex and far-reaching are the entanglements of oil industry with almost every aspect of society, everywhere. Second of all, I wanted the students to think critically about their lives, question the very way they live, what they take for granted every day. You can be an environmental activist, a human rights agent, an renewable energy engineer, a hermit living in a forest in a wooden cabin, you can live an ethical top notch “carbon-free” life or be an orphan in the streets of some villages in a third world country. We are all controlled and affected by oil. If there is some course that can teach students to never take any modern privilege for granted, and to question not only most of the socio-economic and political decisions that are being made now-a-days, but also our own choices that we think we make freely, that is “The Anthropology of Oil”. 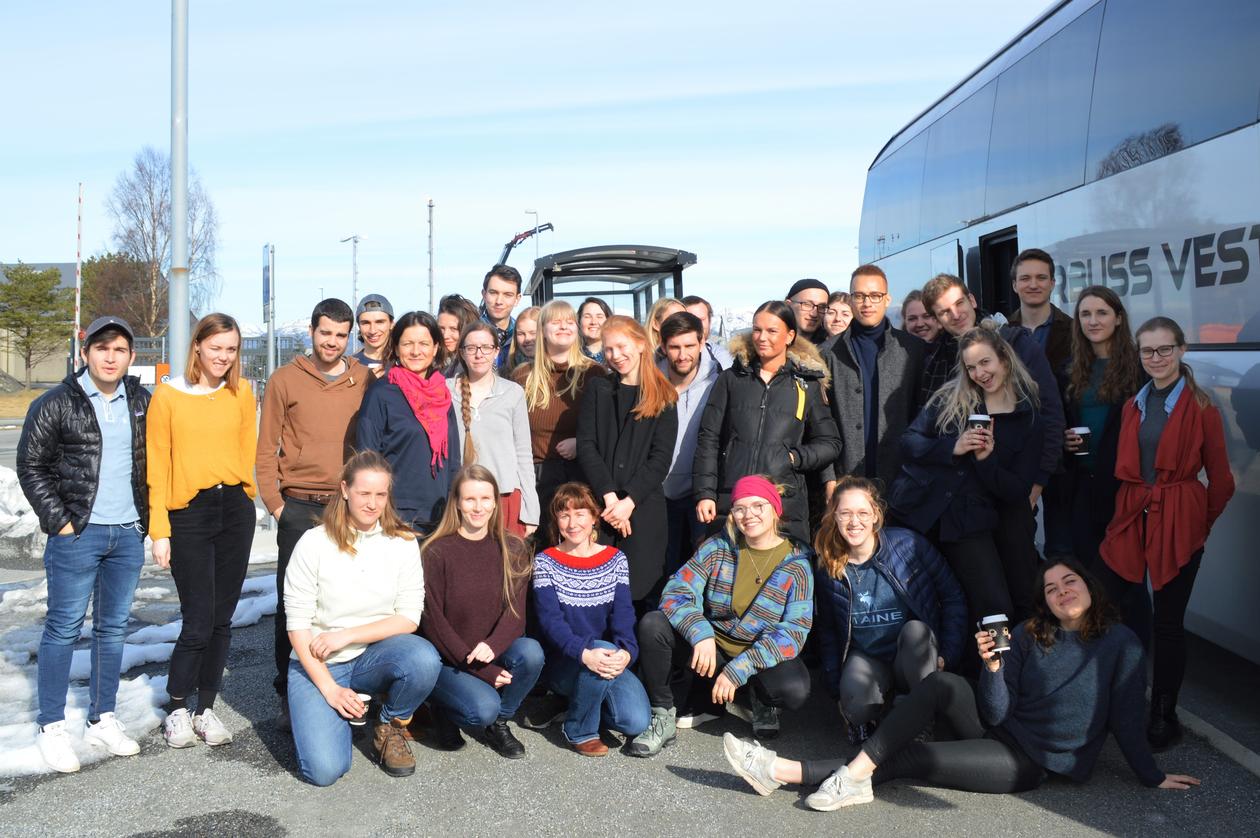 Understanding the impact of oil: the fieldtrip to Mongstad was mandatory, and the students also had to write a field report in groups.
Photo:
Isabelle Hugøy