When Wittgenstein died, he had commissioned his good friends and students Rush Rhees, Elisabeth Anscombe and Georg Henrik von Wright to publish his surviving manuscripts as they saw fit. In this book, Christian Erbacher gives us an insight into how this work ended in what we know today as the late Wittgenstein's philosophy.

Christian Erbacher's time at the Department of Philosophy

Christian Erbacher has for two periods been associated with the Wittgenstein Archives (WAB) here at the Department of Philosophy. First as an NFR (The Research Council of Norway) fellow from 2007 until he defended his dissertation Zur philosophischen Bedeutung der sprachlichen Gestaltung von Wittgenstein's "Logisch-philosophischer Abhandlung" on December 3rd 2010. The leader of the Wittgenstein Archive, professor Alois Pichler, was his main supervisor. Here Erbacher shows how the linguistic form of a philosophical work is also important for the interpretation of that work.

In 2011, he received a postdoctoral position from the Research Council. The title of his project was Shaping a domain of knowledge by editorial processing: the case of editing Wittgenstein's work. The aim of the project was to identify the principles and strategies that formed the basis for the selection of Wittgenstein's posthumous publications. But also to reconstruct motives, conflicts, compromises etc. (also non-philosophical) that have been involved in connection with the various publications.

The work goes on

After completing the research project here at WAB in July 2015, Erbacher continues this work in a new research project, this time at the University of Siegen (Germany). There the German Research Council had granted the Special Collaborative Research Center “Media of Cooperation” a total of about 10 million Euros over a four year period. There Erbacher was allowed to continue his interpretation of the editing history related to Wittgenstein's Nachlass, which now also included the history of WAB.

In addition to the fact that Erbacher has published several articles during his work, the work has now resulted in the book Wittgenstein's Heirs and Editors.

The book will be of great value to anyone interested in Wittgenstein, and especially to those who are interested in the work after Tractatus Logico-Philosophicus which is the only philosophical book Wittgenstein himself published. Professor Alois Pichler says i.a. the following about the book:

- Christian's book leads us in a captivating way through the history of the Wittgenstein publications and thus also to how the philosopher Wittgenstein, as we know him today, was created.

It is a Wittgenstein who has given us philosophical views on "certainty", mathematical problems, art, philosophy of mind, etc.. A key point in this is as Pichler points out:

- But this whole "later" philosophy is extracted from and created on the basis of Wittgenstein's later writings ("Nachlass"). And one lesson to be learnt from Christian's book is that Wittgenstein would possibly have become a different philosopher if he had had other heirs than those he himself had appointed, namely Elisabeth Anscombe, Rush Rhees and Georg Henrik von Wright.

But he quickly adds that this must not be understood so that the three did a bad job. As Erbacher also shows in the book, they managed the manuscripts in a way that tried to be very true to Wittgenstein's own thoughts and desires.

The significance of the Wittgenstein Archives

Erbacher himself makes no secret of how valuable the Wittgenstein Archives has been and still is for his research.

-  WAB is one of the few places in the world where the century old art of philology really meets the latest computer technology. And thus, wise older scholars meet young rising stars here - and together they create very new solutions for very old problems.

And in a way, Wittgenstein's Heirs and Editors tells the story that led to the creation of the unique philosophical and 'Digital Humanities' archives that WAB has become.

The book thus shows the enormous value of having both the edited editions of Wittgenstein's later manuscripts and, at the same time, having, thanks to WAB, access to what he actually left behind, his "Nachlass".

Or as Erbacher so aptly puts it:

- Anyone who is interested in how WAB mastered to transfer the fascination for Wittgenstein's writings into the 21st century will hopefully find a thrilling prelude to that story in this book.

The book is part of the series Cambridge Elements - Philosophy of Ludwig Wittgenstein edited by David G. Stern.

The book will be accessible at no charge until October 5th.  During this period, you are welcome to download a PDF or a Kindle version: Wittenstein's Heirs and Editors

The Wittgenstein Archives at the University of Bergen (WAB) 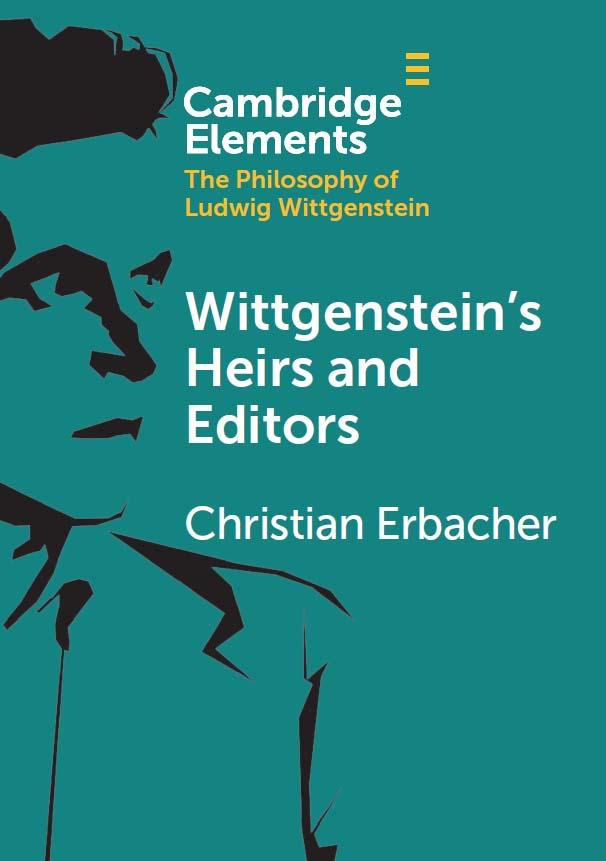