Text and photo by Courtney Flanagan

Steffen's field, microbiology, has been historically one of the least researched areas of science. He has just begun his PhD in this field; he is particularly interested in microbial ecology, the key focus of which today is matching function with identity. Steffen enjoys researching what role microbes play in the whole bio-geological picture.

As a young student, this funny, very likeable Dane loved to climb mountains. He had the thought that he would start a career path with the study of microorganisms in glaciers. (Have you ever noticed a pink glaciar? The color is due to the contained microorganisms.) He thought that this work would allow him to combine vocation with avocation. In fact, when he began working on microorganisms, he studied them in terrestrial hot springs. He enjoyed this pursuit a great deal; for one thing it involved a great deal of travel!

When his doctorate supervisor suggested he begin to focus on the organisms in sediment in Deep Ocean, Steffen was not initially particularly excited. He thought, "Sediment? Boring!" However, once he got into it, he became fascinated. Steffen made the very wise observation that for a curious person, any topic of depth becomes interesting once one begins to learn about it. And sediment soon became very interesting to him for a couple of reasons.

For one thing, sediment in Deep Ocean is a seemingly hostile environment: it is dark, cold, under high pressure, and with minimal nutrients. How then do the microorganisms survive? And survive they do. A deep coring project off of Newfoundland has brought up sediment that is 110 million years old, and it is full of microorganisms. Some are in a dormant state. What kind of energy do they use to revive?

Secondly, sediment covers 67% of the earth's surface, making it clearly crucial to study. For example, it is the microorganisms which may drive the carbon dioxide cycle. These tiniest of life forms therefore may have a huge impact on global warming, but we don't yet know many of the hows or whys. How active are they? How quickly do they work at different levels of the sediment? Can we manipulate them?

Steffen's life on the ship gets busy whenever a sediment core comes back. He takes out a large fragment of DNA, which he clones. If he finds a marker that tells him the identity of an organism and the DNA of a specific action, he tries to associate that action with the marker organism.

This exploration Steffen said, since it gives him an opportunity to connect with scientists from other disciplines, is a huge opportunity. Clearly he loves science. This diarist found it particularly interesting to hear him say that he didn't feel particularly gifted, but that solving problems, and finding a methodology for doing that, has always been a part of his heart. It was very refreshing to hear someone put, "I do this because I love it" before "I do this because I so good at it."

Steffen seems to be a person with joy for all of life (he also organized the ship in our one shuffleboard tournament!) who will continue to be a great addition to the scientific community. 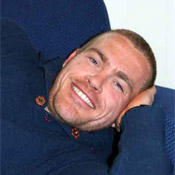