The microbiological discoveries here at the vents may be the most ground-breaking in terms of new biological knowledge, but for me, Dumbo - the cirrate octopod - is the most breathtaking.

Pink and un-worldly, "Dumbo" sailed up in front of our video cameras when we first arrived at this location in 2007. Probably not very large, without laser measuring tools on the ROV we cannot measure objects accurately - maybe 50cm or so - but amazingly calm and graceful!

A web search yields tantalisingly little information. Cirrate octopods, or finned octopods, live in the deep sea and have fragile, gelatinous bodies, so they are rarely seen and rarely captured, and those that are captured are generally more or less destroyed by conventional collection methods.

Our few minutes of video footage are some of the best glimpses mankind has ever had into these rare and beautiful organisms.

"Our" Dumbo (we saw one on virtually every dive in 2008), appeared at the deepest moments - around 2700m. We always saw them singly. Sometimes they would be suspended calmly, drifting near the seafloor in what the literature calls the umbrella pose - supposedly using their web as a net to "fish" small organisms such as shrimp. Sometimes our camera light caught them rising gracefully from the seafloor - using a thrusting motion of their web downward before moving into fin-propulsion mode, using their two large "dumbo-ear" fins on the sides of their heads. (We had not noticed them before they rose up into the camera's view, so it is impossible to say what position they have been in before they came to our attention.)

We generally stopped when we saw one (we saw about one per dive) - and what person would not, when confronted by such an unusual and beautiful creature - our ROV's motion could be described as being as unthreatening as possible. The octopod would swim slowly with its fins or hang suspended gracefully, drifting before us for several minutes, before it thrusted with its web skirt to swim away, or until we moved away.

Its skin is almost transparent. Cartilaginous-looking structures in its head and fins are clearly visible through the delicate looking pink tissue. Sometimes the whole outer skin including the web structure would shimmer with fine waves of contractile movement - some of the literature mentions peristaltic motion.

The eyes were large and black, but seemed to be under the main, almost transparent outer skin. There is no mention of them being blind in the literature, but might their vision be limited? We saw no evidence of bioluminescence.

The siphon was clearly visible in a "nose" position. Together with the eyes and large fins (ear position), they combined to make the "Dumbo" face.

We have not seen an example of the ballooning, defensive behaviour, reported in some of the literature. We never saw inking, and this supports the literature, which says that inking is absent for this group of animals.

The literature suggests that the web is used in feeding. The octopod apparently uses it to enclose a volume of water, thus trapping small organisms such as shrimp. Unfortunately, the one time this was observed in an aquarium, the enclosed material was then shut off from view, so the actual eating was only assumed!

Papers on behaviour and locomotion. The phylogenetic organisation of the cirrate is hotly disputed. 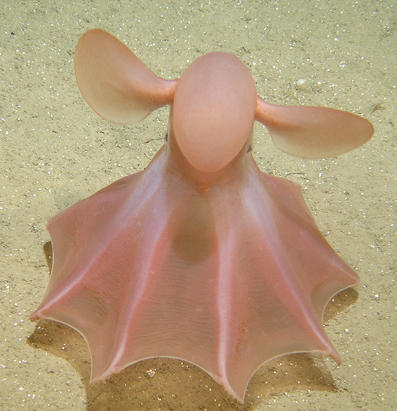