See what projects the Geodynamics of the Deep Seafloor theme is working on now! (Updated June 2014)

Architecture and formation of oceanic lithosphere

Researchers from CGB are studying the structure and composition of the oceanic lithosphere. At slow spreading rates, melt supply decreases and plate separation is partly accommodated by tectonic processes, which result in an asymmetric spreading and an uplift of deep-seated materials from the lower crust and upper mantle. Magmatic and tectonic processes thus interact to produce compositionally heterogeneous lithosphere along slow spreading ridges, such as the Mohns and Knipovich ridges in the Norwegian Greenland Sea. In recent years, it has been shown that oceanic detachment faults play a major role in plate separation and construction of the oceanic lithosphere; they are also a favourable environment for the development of hydrothermal systems.

In November 2013, the CGB was actively participating in the French-funded ODEMAR (Oceanic Detachment along the Mid-Atlantic Ridge) cruise along 13°20-30’N oceanic detachments. This cruise is a part of along-term international effort to study oceanic detachment faults and will be complemented with a seismic experiment taking place in the same area in 2015 (UK-funded)to study the structure of the lithosphere and the distribution of seismic activity associated with detachment faulting. The outcomes of this international project will greatly contribute to understanding the seafloor spreading mechanisms along the strongly asymmetric Mohns Ridge.

The formation mechanisms of new oceanic lithosphere and its evolution are presently the most dominant processes in the chemical differentiation of our planet. The IODP Expedition 345 cored the first significant intervals of primitive modally layered gabbroic rocks from just above the mantle –crust transition. The spectacular layering is presently studied within a high resolution spatial and analytical transect across the best-developed and preserved layered lithology. The unexpected abundant orthopyroxene found within these primitive gabbroic rocks, deviates from standard MORB crystallization models. The early stability of this phase is being chemically studied at CGB with experiments performed in Hannover. A new continuous sampling technique provided CGB with a more representative sample to study average modal and geochemical compositions and so cast light on seawater circulation within this lower crustal segment.

Researchers working in the geodynamic theme are also investigating the earth mantle, deep below the seafloor surface. In 2013, new isotope geochemistry data have been measured on samples collected during the SUBMAR program (1999-2004). These new data are showing the existence of different ancient mantle domains along the North Atlantic ridges system. This dataset will be completed with new samples collected during the 2013 G.O. Sars summer cruise along northern Kolbeinsey Ridge, and is expected to bring some new insights on the nature of Jan Mayen hotspot volcanism.

Increasing global demand for the supply of raw materials has recently raised awareness for the metal resource potential of seafloor hydrothermal systems (e.g. Cu, Zn, Pb).Global knowledge of these systems distribution is, however, still in its infancy as no more than 200 high-temperature hydrothermal systems capable of forming massive sulphide deposits are known. Slow to ultra-slow spreading settings such as the Arctic Mid-Ocean Ridge represent promising areas in the quest for seafloor hydrothermal systems capable of forming sulphide accumulations with high enough grades and/or tonnage to be considered ore mineral deposits. It is therefore important to assess quantitatively the potential for undiscovered massive sulphide resources occurring in the Arctic Sea. The scientific community is responsible to generate information that will be used by government and industry when they put forward a legal framework for exploring and exploiting those delicate systems. Knowledge is the best approach to protect and develop a sustainable plan of action for the next decade.

The CGB team has been focusing its research on known hydrothermal systems of the Arctic Mid-Ocean Ridge, namely the Jan Mayen vent fields and Loki’s Castle whereas other systems are now in prospect of further exploration in the upcoming cruises. Although they have some geochemical differences, both systems are characterized by aZn+Cu±Pb (±Au) coupled with barite-rich mineralization in the vent chimneys, and Cu+Zn (± Se) sulphide mineralization in the hydrothermal mounds. These are typical features of basalt-hosted type hydrothermal sulphide mineralization with moderate zone refining processes. Further understanding of these systems will increase the possibility for finding new potential exploration targets that ultimately may lead to discovery of new hydrothermal systems.

One of the main research objectives of the CGB scientific cruise on the R/V G.O.Sars in June/July 2013 was not only to revisit the Centres unique natural laboratory, theCO2-rich Jan Mayen vent fields at 71°N, but also to give some constraints on the occurrence of hydrothermal venting along the ultraslow spreading Arctic Mid-Ocean Ridge (AMOR) system. To do so, the water column above parts of the mid-ocean ridge system was systematically investigated for anomalies of chemical parameters. By using a CTD equipped with state-of-the-art sensors for Eh, CO2 and CH4 as well as onboard gas chromatography for H2 and CH4, hydrothermal anomalies were found in the water column above the Mohns Ridge. These point to at least three more vent systems along this section of the AMOR. The geochemical studies of volatiles released to the water column by hydrothermal venting enhance our understanding of the formation and speciation of C-O-H-S fluids as nutrients for biological activity as well as help to identify potentially interesting sites for massive sulphide deposits.

In 2013 CGB also successfully used a novel exploration technique to locate shallow hydrothermal vents using the water column multibeam system of the G.O. Sars. This system was deployed at the Jan Mayen spreading centre to locate two additional hydrothermal vents to the east of the Troll Wall field. Following the success at Jan Mayen, water column detection was also used at the Northern Kolbeinsey Ridge to successfully locate the first hydrothermal systems ever found at this site. This survey technique combines large-scale multibeam mapping of seafloor morphology with rapid vent identification, making it an ideal technique in all shallow-water regions for locating active venting sites. The 2013 cruise also collected extensive acoustic surveys of hydrothermal bubble plumes using fisheries acoustic systems. Prior to the 2014 field season these data will be processed to constrain the flux of gas from these hydrothermal systems, a measurement essential for understanding the impact of these volcanic systems on the ocean and atmosphere. These measurements will be further refined with the deployment of an acoustic lander at Jan Mayen in the summer of 2014. 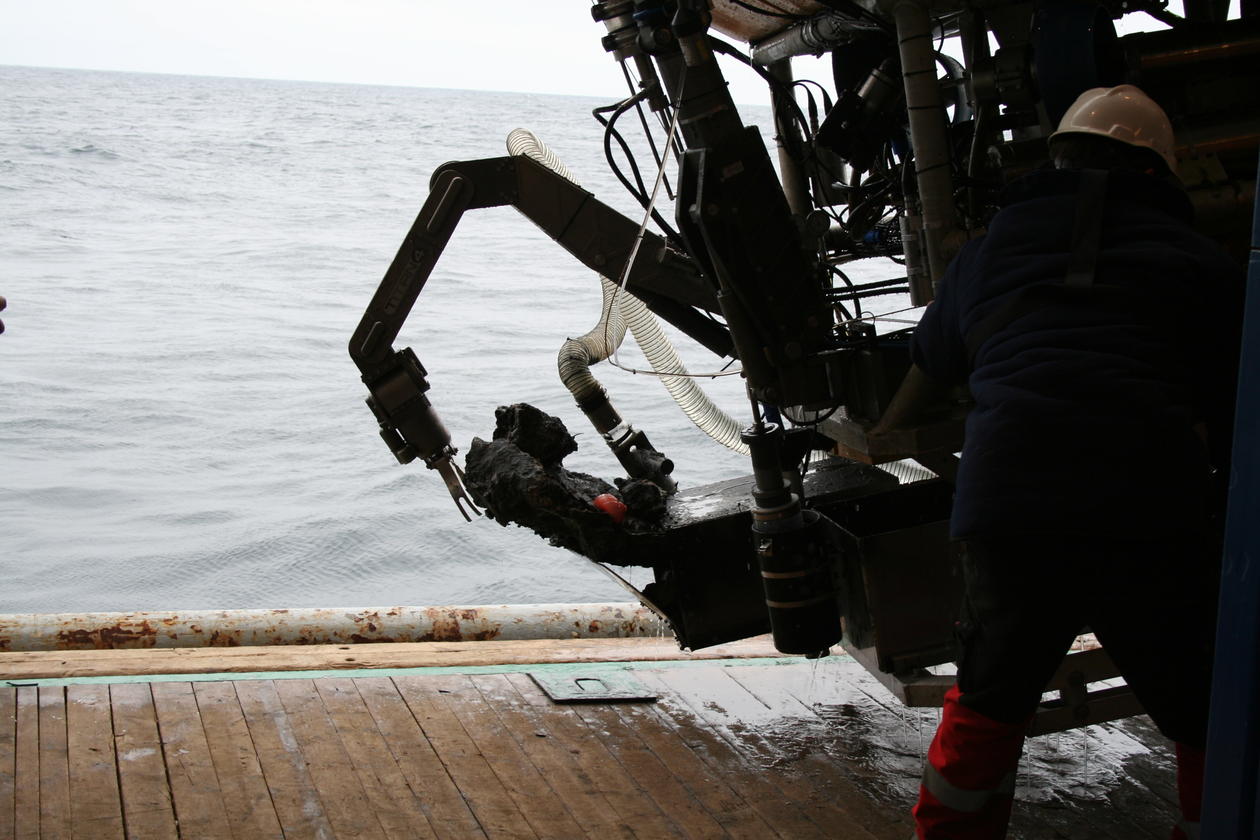