When the Centre for Geobiology (CGB) began in 2007, Olsen was a master student working on upper sublittoral micro algae! At a first glance this work seems vastly different from his research focus today. Although the sublittoral environment is shallow, coastal and photosynthesis-based, Olsen began to build a multidisciplinary «tool-box» that has continued to serve him well as he works to gain an overall understanding of an eco-system.

Within the Marine Biodiversity research group at the Department of Biology, Olsen came into close contact with scientists with diverse interests and competencies. This enabled him to expand his multidisciplinary “tool-box”, to included taxonomy, molecular biology, macro- and micro-biology and ecology, to name a few.

Another development that has impacted biological research these past years is technology – especially in terms of molecular analyses and “omics” approaches. Not the least, says Olsen, the fact that these advances have reduced the costs of technical procedures, such as gene sequencing, is something which has given researchers access to data – and insights – that were unthinkable just short decades ago.

At a multidisciplinary centre such as CGB, not only do the biologists benefit from easily accessing expertise and competencies from different biological disciplines, but co-location means that opportunities to learn about geological and geochemical approaches are facilitated. Unfortunately, the Vent and Seep Biota research theme was unable to be co-located with the rest of CGB and  Olsen recognises that his work could have benefitted from an even closer association with CGB’s geologists and geochemists; a synergy that would have been possible if all of CGB could have been in one location. According to Olsen, the collaborations he has had within CGB has given his research results important geological and geochemical contexts that he would not have had without the Centre. He plans to work to increase this collaborative activity in the future. Such close cross-discipline collaboration is critical to the systemic environmental research questions of today; Olsen says that we need it to address the global issues we face.

Olsen began a PhD in 2009 studying the trophic interactions in communities of organisms. To understand who was eating whom, he had to develop molecular tools to analyse stomach contents. Being part of CGB gave Olsen access to some unique, relatively inaccessible and unstudied environments: deep sea, hydrothermal vents, seeps and the water column above vents. The ecosystem he focused on for his PhD was the oceanic water column, and in particular, whether the communities living there are affected by impulses such as inputs of plume waters from hydrothermal vents.

Read more about his PhD here (in Norwegian)

Olsen explains that being a researcher in a large Centre is a “win-win” situation: CGB’s infrastructure (ship time and equipment) gives marine biodiversity biologists access to unique, unexplored ecosystems that would be less accessible to them otherwise. In turn, the marine biodiversity knowledge generated provides CGB with a more complete understanding of the deep sea and vent environment Centre researchers are exploring.

A Deep Sea Centre could bring it all together!

Over the course of nearly a decade, CGB has gathered a diverse group of research specialists. Over time, as Olsen ably demonstrates, they have learned from one another and have become multidisciplinary specialists able to approach research questions from new interdisciplinary perspectives. The result is a generation of researchers with a more global understanding of environments, especially new frontiers, such as the deep sea.

Olsen hopes that UiB will be able to establish a new Deep Sea Research Centre to carry on this important multi-disciplinary activity. 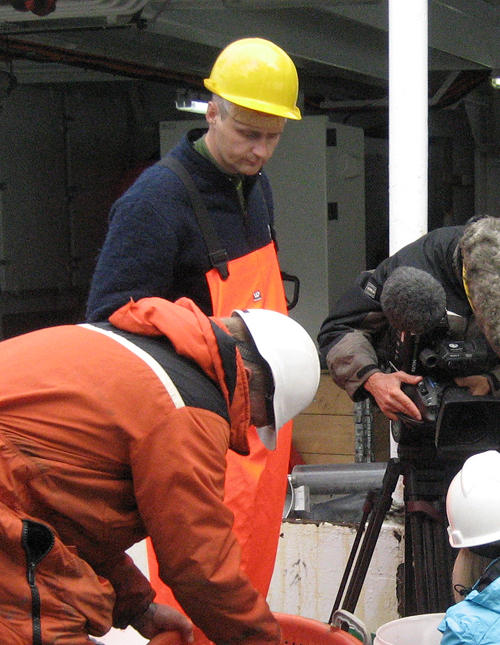