With global warming, ocean circulation in the Atlantic Ocean is generally thought to weaken. New research shows that less sea ice off the coast of Greenland may work against this.

From this year's cruise to the Iceland Sea and the Greenland Sea. Few researchers go to this ocean region in winter, despite that being the season when the most exciting processes occur.
Photo:
Sindre Skrede/ NRK

"This is an unforeseen consequence of climate change", says Kjetil Våge.

He has just returned from the ice edge east of Greenland. In a unique cruise led by Woods Hole Oceanographic Institution, oceanographers and meteorologists collected data from the atmosphere and the ocean. Together with researchers from the Bjerknes Centre for Climate Change and the Geophysical Institute at the University of Bergen, they traveled to a region where few ships go in winter.

While Våge and his colleagues were at sea, their analyses from a previous glider cruise were published in the journal Nature Communications. In their study, they show that reduced sea ice cover off the coast of East Greenland can lead to more overturning of the water masses. This overturning is an important component of the circulation in the Atlantic Ocean.

Researchers have previously warned that global warming can reduce the Gulf Stream and its continued branch along the Norwegian coast. Våge's work adds a new element to the picture. Increased overturning along the coast of East Greenland may contribute to maintaining the circulation in the ocean.

"Our results show how complex the climate system and the ocean currents are, and how difficult it is to predict the consequences of global warming", says Kjetil Våge.

The large ocean currents on Earth distribute heat between the warm tropics and the cold, polar regions. In the Atlantic, water flows nortward near the surface; in the Gulf Stream and farther north between the Faroes and Scotland, into the Norwegian Sea and along the Norwegian coast. As the water cools, it becomes heavier and sinks. Then, it flows southward along the coast of Greenland and through the strait between Iceland and Greenland toward the bottom of the Atlantic.

This is the background for the theory that global warming may reduce the overturning circulation, and then also the Gulf Stream. When the air gets warmer, the surface water will not be cooled as much as before and then not sink as efficiently. As a result, the surface current flowing northward will also be reduced.

Kjetil Våge's new results show that this reduction may be counteracted as more water sinks outside the east coast of Greenland. In this region, the water flows southward, both at the surface and farther down. As long as there is ice on the water, it is protected against the cold winter air above. When the ice disappears, the water is cooled and sinks.

Storms are common in the Greenland Sea and the Iceland Sea in winter. Going there in summer is normally seen as a better way to ensure you get the measurements you need. As a result, there is very little data from the region outside the summer months. It has been assumed that little downwelling and overturning occur there. This may simply be due to a lack of winter observations. According to Kjetil Våge, most of the sinking takes place during winter, when strong northerly winds plow the surface water away.

"It is actually obvious that downwelling and formation of deep water occurs in winter, when cold air can cool the ocean", he says.

In summer, with calmer weather, there is more fresh and light water at the surface than in winter. Less dense water on top of denser water makes the water column stable. In fall and winter, strong northerly winds drive the light surface water westward, toward the Greenland shelf. This makes the water masses more unstable. As a result, the surface water sinks quickly when it is cooled and becomes denser.

"This transport of surface water is a requirement for deepwater formation", says Våge.

Kjetil Våge and his colleagues are among the few who have measurement campaigns in this region during winter. Gathering data for their article, they got help from natural and artificial submarines – seals and gliders.

The gliders are drones of the sea, in this case resembling yellow vacuum cleaners with wings and tails. They can be remotely controlled to dive down into the deep and back up, and to glide exactly where you want measurements. During the winter of 2015–2016, the researchers let a glider glide back an forth in the ocean east of Greenland. Every time it came to the surface, it sent data to Bergen via satellite.

There was only one problem.

"We did not dare to send it too close to the ice edge", says Kjetil Våge.

In-between the ice floes and under the ice, a glider can quickly hit something and damage itself. To keep it safe, data were collected to the east of the core of the southward flowing Greenland current. There, the researchers observed that the water was cooled and that surface water was mixed more than 400 meters down into the ocean.

Data from instrumented seals, acquired by other research institutes, confirmed the results from the gliders.

Whether a similar degree of downwelling occurs farther west, in the core of the current, is still unknown. New ice-avoiding software allows the scientists to send the gliders closer to the ice edge this year. Hopefully, data from this measurement campaign will bring them closer to knowing how much the overturning off the coast of East Greenland means for the circulation in the Atlantic Ocean. 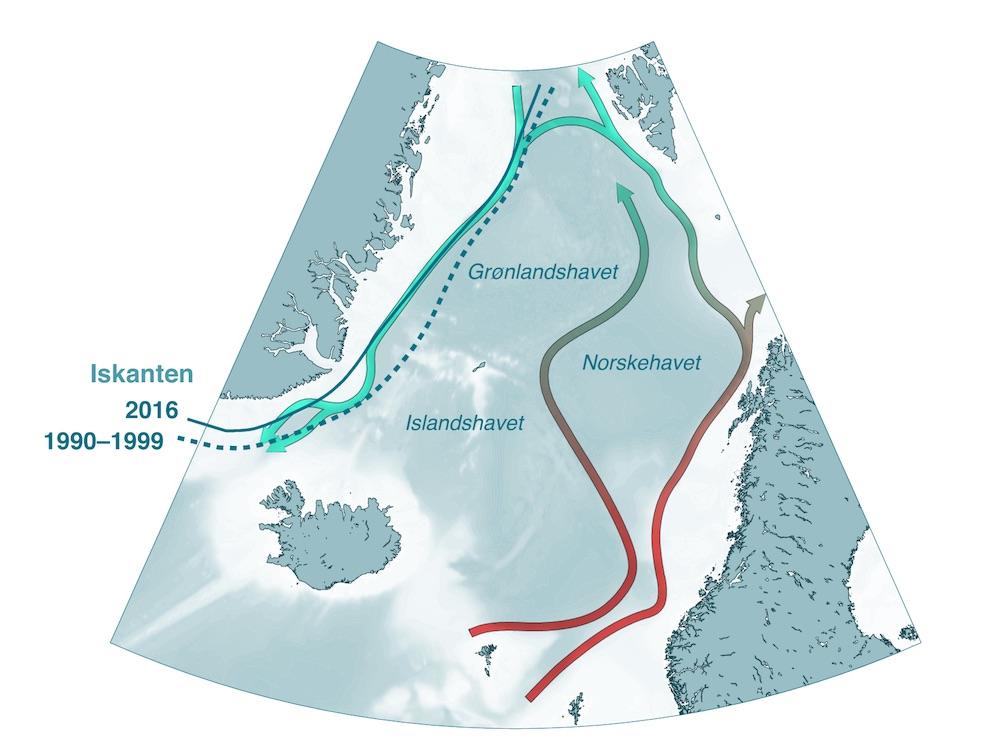 Ocean circulation in the Nordic Seas. The Norwegian coastal current, a continuation of the Gulf Stream, flows nortward at the surface along the coast of Norway, before the water sinks and returns south along the coast of Greenland.
Photo:
Kjetil Våge 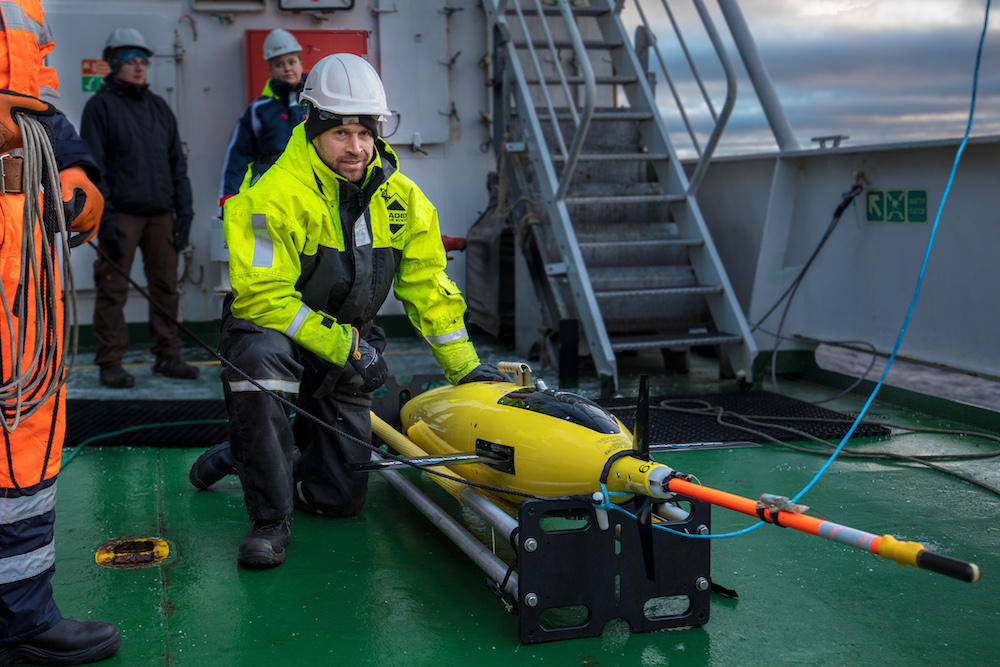 Kjetil Våge with a glider onboard the NRV Alliance during this year's cruise.
Photo:
Sindre Skrede/NRK