My research work is focused on the detailed comparative studies of the tectonics, cooling and exhumation history of the East African continental margins in northern Mozambique and southern Norwegian margins using the Fission Track Dating of zircon/sphene/apatite and (U-Th)/He analysis. The aim is to undertake a detailed comparison of the tectono-thermal processes along the East African and Norwegian margins using the low-temperature thermochronological techniques on selected sections. Modeling techniques is also to be applied to unravel as well as to quantify the complex exhumation histories and later thermal overprint events.

Before shifting to the study of the exhumation history of the passive continental margins along reactivated older orogens, I have studied the cooling and exhumation history in active orogens like the Himalayas (the Trans-Himalaya, the Higher Himalayan Crystallines both in NW & NE, Tso Morari Crystallines and the Foreland basin) using FT as well as Rb-Sr muscovite and biotite dating techniques. 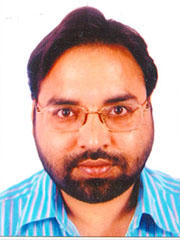