What is System Dynamics?

The modelling language is intuitive and it is common for all kinds of applications be they in medicine, economics, management etc. This makes System Dynamics an ideal tool for interdisciplinary work, and it makes learning more efficient because basic system structures tend to repeat themselves from one field of application to another.

Test yourself as a decision-maker in one dynamic environment

Before you go on reading, get a little experience in decision-making. The experience will make it easier for you to appreciate the text below. Here you can download a simple laboratory experiment in the form of an Excel-document.

A general tendency to misperceive the importance of delays

To illustrate what System Dynamics is about we choose delays as an example. At the outset a delay is easy to understand: you do something and it just takes some time before you see the full result. However, if you base new decisions on what you see at the moment, the feedback you base your decision on is delayed. Since the information is outdated, things start to get complicated. Actually laboratory experiments, some of them similar to the above experiment, find that decision-makers tend to underestimate the importance of delays. Sometimes they behave as if the delays were not there at all. Perhaps you just experienced the same.

When taking a shower and adjusting the hot water, most of us have experienced that it gets too warm, we readjust, and it gets too cold. The temperature overshoots the desired temperature, and perhaps fluctuates, before we are able to stabilize it. The difficulty is caused by the time it takes from we adjust the valve until we sense the temperature change. If we go on turning the valve based on the temperature we feel at the moment, we adjust too much. Because of the rapid, and at times tough feedback, we quickly learn to deal with showers. We slow down the adjustments and wait until the "old" water has passed through the pipeline. The figure below shows the standard symbols that are used to illustrate the structure of dynamic systems. The rectangle denotes a reservoir or a stock, which it takes time to increase by the inflow or decrease by the outflow. This accumulation gives rise to dynamics.

Controlling the intake of alcohol, a biological system

In the above experiment you were asked to control the intake of alcohol to reach a given alcohol concentration in the blood. The challenge lies in the time it takes from the alcohol has been swallowed until it has been absorbed in the blood stream. If one drinks as long as one feels that the desired level has not been reached, an overshoot will follow. This is an insight that many young people do not possess. At times the consequences are serious in that overly intoxicated juveniles get involved in dramatic accidents.

Because it is difficult to see what behaviour over time follows from a given system structure, computer simulations are used. The figure below shows how the alcohol concentration develops in the laboratory experiment if you assume that the intake of alcohol at each point in time equals the desired concentration minus the actual concentration. (Do this in the experiment and you may have performed you first simulation). The graph below shows a result similar to what many observe in the experiment and what some young people experience in practice.

Delays are everywhere. In business, for example it takes time to adjust the production capacity. It takes time to build and install new machines and it takes time to hire and train new colleges. Laboratory experiments show that both students and professionals tend to underestimate the importance of delays. One consequence is that many markets show fluctuating behaviour, alternating between periods of over- and undercapacity. The best known example is the pig market. In such markets the delays are much longer than the ones you experience in the shower. Therefore it takes much longer to learn from experience. Furthermore, in such markets the data you receive are influenced by many other factors as well. In the pig market for instance, pig prices vary with the prices of corn. Since decision makers tend to look for explanations that are near in time and space, a sudden change in corn prices may be perceived as a much more important explanation of pig prices than investments in new pigs one or two years ago.

Delays can be found in all fields. Dynamic systems also possess other complications than delays, for instance reinforcing feedback, compensating feedback, non-linearities, stock and flow relationships etc. Laboratory experiments show that the more complex, the more likely it is that decision makers misperceive and make improper decisions. Therefore it is important both to study how complex systems work, and it is equally important to contribute to learning. Actually, this is not a new idea. According to Johannes Kepler (1609): "The roads by which men arrive at their insights into celestial matters seem to me almost as worthy of wonder as those matters in themselves." With the growing interconnectedness and complexity of society, analysis and education is more important than ever before.

In the future, learning about dynamic systems should be part of our general education. There is an ongoing effort in the US to use System Dynamics in primary and secondary schools. The quite simple symbols of stocks and flows and of feedback loops used in System Dynamics are powerful tools to understand what is otherwise perceived to be complex and advanced, ranging from acceleration and velocity to deep philosophy. Currently System Dynamics is used for research and education in a large number of separate fields, see the System Dynamics Society's homepage, and it is used for analysis by large companies, governments, international agencies, and consulting companies. 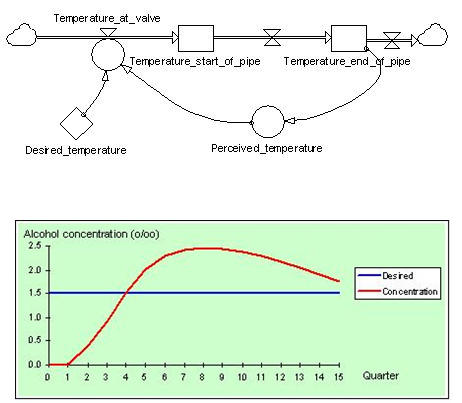