This year it is 85 years since Asbjørn Følling from Steinkjer made the discovery that avoids permanent brain damage in four Norwegian children every year and many more in the rest of the world. In March, a mother of such an American child will ski across Norway to honour the Norwegian physician, and everybody is welcome to join the scientific and social programme organized by the National PKU Alliance when she reaches the finishing line.

It was most likely due to his education also as a biochemist that the physician Følling thought of testing the urine of two mentally retarded children whose condition was a mystery to other doctors. His investigations revealed that their urine contained phenylpyruvate and realized that the breakdown of the amino acid phenylalanine was faulty in these children. This new knowledge laid the basis for the strict diet that patients with the disease, now known as phenylketonuria or PKU, must follow. If a high level of phenylalanine is detected in the newborn, the child can be put on a controlled diet immediately and avoid irreversible brain damage. PKU patients have a dysfunctional phenylalanine hydroxylase enzyme and experimental and future treatment options encompass gene therapy, enzyme replacement therapy and pharmacological chaperones.

Alison Reynolds is the mother of Tia who has PKU. In March she will arrive in Norway together with several well-known researchers in the PKU field to share the most recent knowledge about the disease and to raise money for more research. The trip starts at the border between Sweden and Norway from where she will cross Norway on cross-country skis, passing the birthplace of Følling and finishing in Stjørdal. The trip will take nine days and all patients with families, researchers and others who are interested are invited to attend the event that will be held at Britannia Hotel in Trondheim on the 29th of February and at Scandic Hotel in Hell the following day.

Aurora Martinez from the University of Bergen, Norway. 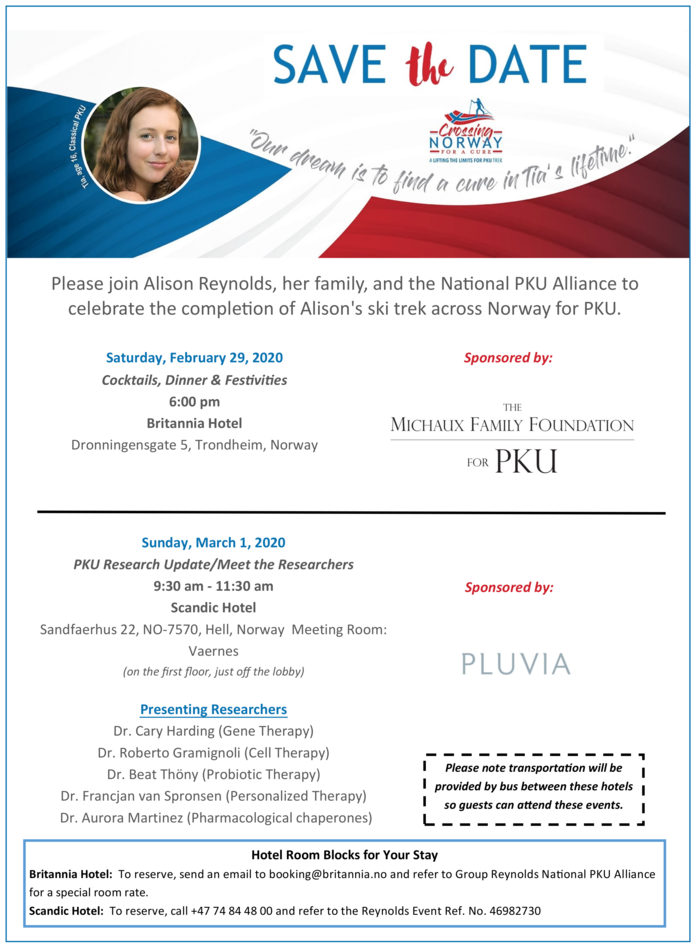