UiB researchers have developed a “GPS system” to find protein-positions in cells. The method was used to reveal a special localization the newest member of an enzyme family with important tasks in the human body. This new enzyme knowledge may be useful in medicine and the cellular "GPS system" could become a useful tool in both basic biological and biotechnological research.

N-terminal acetyltranferases (NATs) are enzymes that cause a chemical change in proteins by putting on an acetyl group at one end called the N-terminus. This process is called N-terminal acetylation and happens to about 80% of the cell’s soluble proteins. So far, six members of the NAT family have been identified. These are called NatA, NatB, NatC, NatD, NatE and NatF.

The physiological significance of N-terminal acetylation has become apparent through newly discovered diseases that are caused by genetic defects or deficiencies in the NAT enzymes. But still we know little about how the NATs solve their important tasks at the molecular level. Thomas Arnesens research group (the NAT group) at the Department of Molecular Biology aim at solving this riddle. Researcher Henriette Aksnes and her colleagues in the NAT group have in a new scientific publication in the journal Cell Reports demonstrated that N-terminal acetylation occurs nearly as often with proteins that sit in the organelle membrane and also present the first organelle-associated NAT, NatF (also called Naa60).

Until recently, only cytosolic NATs were known. Arnesen’s group began to look for an organelle-associated NAT several years ago. After studying many candidates by advanced microscopy they discovered that NatF had a distinct localization pattern that was drastically different from the five other NATs. Aksnes was given the task to characterize NatF as part of her PhD project. She defended her thesis in February 2014 and the dissertation was awarded last year’s ZONA award.

"NatF quickly became my favourite protein and I spent many hours in the dark in the microscope room where I studied this interesting and unusual NAT", says Henriette. "As soon as we had discovered that NatF was the first membrane-associated NAT, we began to wonder if it worked inside the organelle or towards the cytosol." More microscopy-based studies, including a newly developed method called PROMPT (protease assay Membrane Protein Topology) showed that NatF was on the cytosolic side of the intracellular membranes. "This method was developed by Marc Niere and colleagues in Mathias Ziegler’s research group and a productive collaboration was initiated in the ProtMetD research programme when we realized that they needed an uncharacterized protein to demonstrate the PROMPT methodology." This method can be used both as a positioning system and a GPS tracking system for proteins inside a cell. Unlike more conventional methods that can tell researchers where in the cell a protein is, PROMPT can also say something about where it has been. PROMPT is a further developed variant of a method that took form at MBI well 10 years ago.

The various members of the NAT family differ from each other in that they have different substrate specificity, i.e. that they recognize and acetylate different types of N-termini based on the amino acid sequence. In collaboration with Petra Van Damme and Kris Gevaert at VIB (Vlaams Instituut voor Biotechnologie, Ghent), we use an advanced method, called COFRADIC, to identify NAT substrates. The method has previously been used to determine the substrate specificity of the other NAT enzymes. The unique observation in the analysis of NatF was that only transmembrane proteins, i.e. those that go across the cell membranes, were picked up. In addition, this analysis focused, for the first time, on organelle isolates which lead to the observation that N-terminal acetylation is very common also among transmembrane proteins.

Further work: NatF keeps the Golgi apparatus together, but how?

"In addition to being localized to the Golgi, our findings also suggest that NatF has a function in structural maintenance of the Golgi apparatus. By inhibiting the expression of NatF, we observed that the Golgi became fragmented. We believe that this is due to lack of N-terminal acetylation of one or more proteins that are important to the Golgi." Henriette is looking forward to go deeper into the cellular functions of NatF together with co-authors PhD student Marianne Goris and researcher Michaël Marie who has a special interest and experience in the Golgi. “As the pieces come into place, we hope to get closer to an explanation of why the NAT enzymes have such important physiological roles. We already know that NatF is regulated and it may be implicated in at least two different diseases and this is followed up in our further studies”.

The study is published in the scientific journal Cell Reports 26 February 2015.

Proteins Building blocks of all living organisms with vital tasks in the cells. Proteins are made in the cells based on recipes embedded in the genes.

Cytosol The aqueous substance that is surrounded by the cell membrane.

Organelle A structural unit of living cells that have a specific physiological function.

Golgi apparatus An organelle that is a system of membranes shaped like flattened bags that function in preparing the proteins to be secreted by the cell. 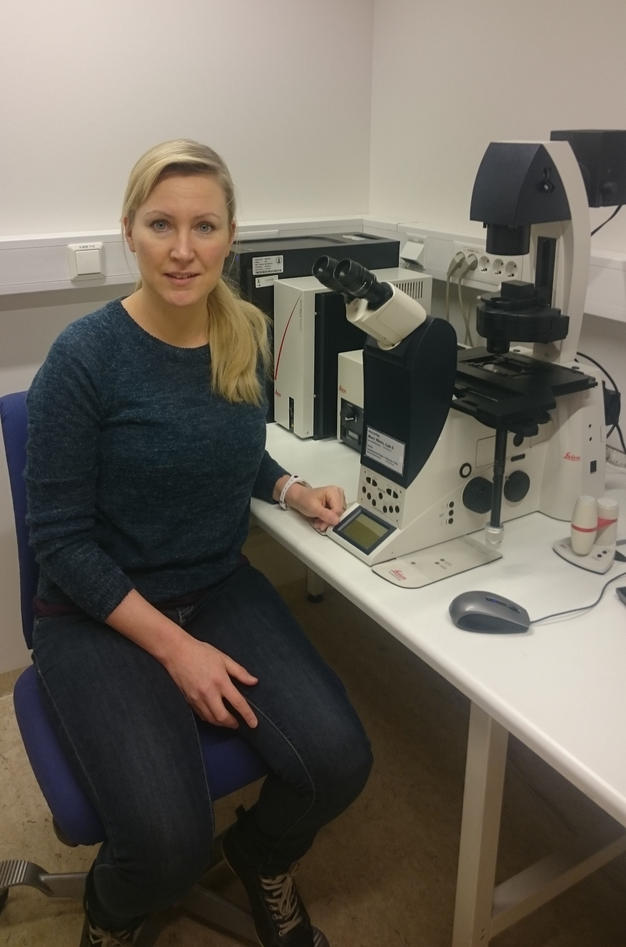 The microscope has been an important tool in this study. Researcher Henriette Aksnes finds it exciting to study protein properties by colouring them with fluorescent substances so that they are visible under the light microscope. In combination with other methods, the microscope is a valuable tool to reveal the important tasks that the NAT enzymes perform in the cell and the organism.
Photo:
Camilla Osberg 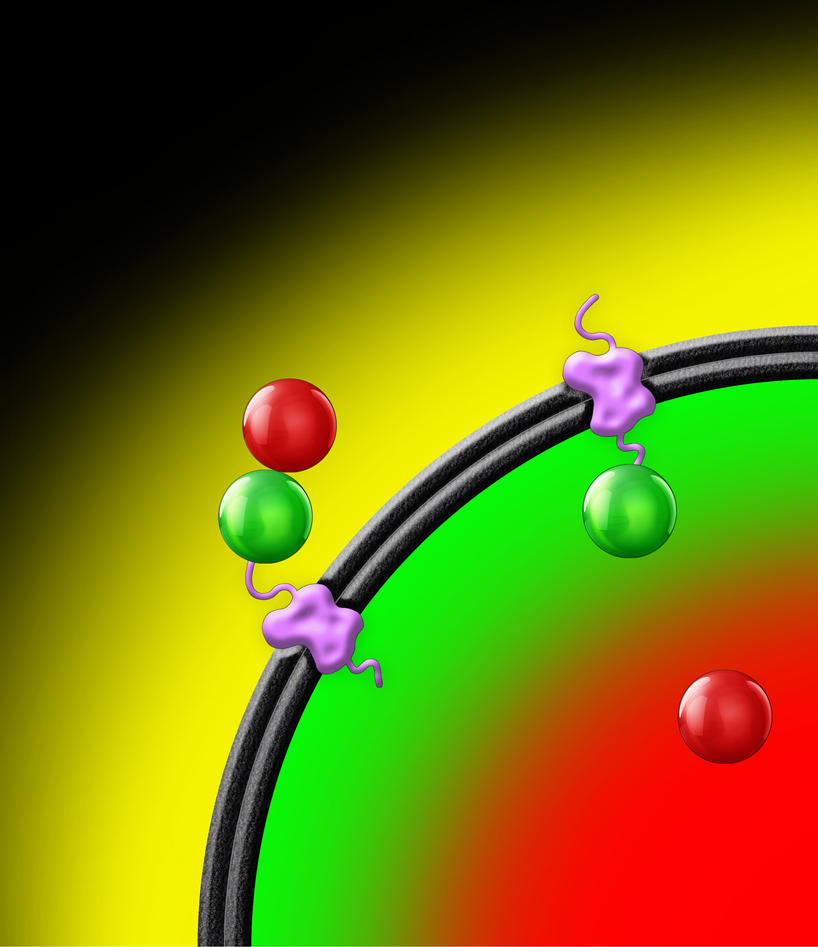 PROMPTing cells to reveal membrane protein topology. NatF/Naa60 was studied using a novel assay for the determination of membrane protein topology developed by Marc Niere and colleagues in Ziegler’s research group at UiB. This method utilizes directed localization of proteases in combination with a cleavable tag of green and red fluorescent protein.
Photo:
Henriette Aksnes and Michaël Marie