Health Priorities of the Future

Perhaps we should issue a time frame on the public health bureaucracy, says CCBIO Director Lars A. Akslen, when considering the time it takes new drugs to be accepted to Norway.

Health priorities; is new cancer treatment too expensive for the Norwegian budget? What weighs more - the cost or prolonged life?
Photo:
Illustration: colourbox.com

The topic for discussion was "Health Priorities of the Future". The national healthcare budget is limited and we are facing decisions that concern life and death. Who should be prioritized and who must settle for the next best medicine?

Openness about the decision-making process is a relatively new thing. A Norwegian governmental expert group on public health prioritization, in 2014 submitted its final report “Open and just - priorities in the Norwegian healthcare services”. Its main conclusion is that health prioritization needs to be systematic, transparent, based on general criteria, effective and anchored in the goal of “as many good life-years for everybody, fairly distributed”. Guidelines on how to make priorities were given.

The report caused a considerable debate in the media and among politicians. Professor Ole M. Sejersted, Vice Pres of the Norwegian Academy of Science and Letters (Det norske videnskaps-akademi) stated in his introduction to the meeting that “this debate is important as it addresses essential ethical and political issues, spans many disciplines and involves so many academic fields”. The Academy wished to facilitate a debate arena where the professionals and society can meet. This meeting is an example of such an arena.

Professor Ole Frithjof Norheim has been concerned with the priority issue for many years. He was leader of the governmental expert group on public health prioritization who submitted the report and explained about the process of elaborating the report, the complexity of the issue and the necessity of the focus on prioritization. You can read the report in full here.

Associate Professor Elisabeth Ivarsflaten from the Department of Comparative Politics at the UiB, is coordinator for Norsk medborgerpanel, a large-scale survey among Norwegian citizens on attitudes to key issues in Norwegian society and politics. The survey showed that health is a very important issue for people, and that the public is divided on the question whether the resources used on health are sufficient. Nevertheless, there is more or less a general agreement that public healthcare needs to consider costs and benefit when choosing treatment methods. Public opinion was also important for the Norheim report, and Norsk medborgerpanel was a collaborative partner in the work with the report.

Request from society onto science

CCBIO Director Lars A. Akslen contributed with the talk "Personalised treatment and prioritization – what can we do and what do we do?" CCBIO is conscious about the prioritization debate and the issues raised. A researcher today is asked to consider the social role and function of his knowledge before it is produced. There is a new request from society onto science: the request not only to produce knowledge but smart knowledge that can promote socially robust decision-making. This is also addressed in a CCBIO Research School for Cancer Studies course for PhD students, CCBIO903; Cancer Research: Ethical, economical and societal aspects.

Professor Akslen explained about the complexity and uncertainty of cancer and reflected upon several issues he observes in his profession and some provocative positions in his field: Should we spend public money on research of cancer types that are not fatal? What about the cost of excessive diagnostics and treatment of advanced cancer? Some cancers might in fact be so slowly growing that less treatment than given today should be considered. And then there is the long time-span from a new, effective drug is ready for use until it is approved in Norway. "Perhaps we should issue a time frame on the public health bureaucracy in addition to what has now been implemented for the hospitals, and see if they have more luck in keeping their deadline?" Akslen asked.

CCBIO's focus is to develop tools to better define which cancer cells that will spread or not, and who might benefit from which treatment. Biomarkers are such tools, which work as a biological fingerprint that can be analyzed and reported to clinicians, giving better understanding of tumours, how they spread and interact with the surrounding body tissue, and how they respond to treatment. "This is new research that might prove very important in the prioritization process", Akslen concluded.

There is no question that health priorities is an issue that involves many aspects of society, involving both the medical profession, researchers, politicians and the public - and not least, the individual patient. This meeting could not solve any questions, but the evening showed that this is a very complex issue, more questions need to be raised, and transparency on how public prioritization is done is of major importance in our democratic society. The Norheim report is part of this openness, and that is a large step in the right direction.

Article in Bergens Tidende about the meeting.

"Ja til kreftpasientar kan bety nei til andre" (Yes to cancer patients might mean no to others), Bergens Tidende 28.10.15.

"Vi har ikke tillit til at det prioriteres rett", (We do not believe in the justice of the priorities taken), Bergens Tidende 29.10.15.

The debate was opened by Vice Pres of The Norwegian Academy of Science and Letters (Det norske videnskaps-akademi), Professor Ole M. Sejersted. Communications Adviser at CCBIO/UiB Marion Solheim was chair. 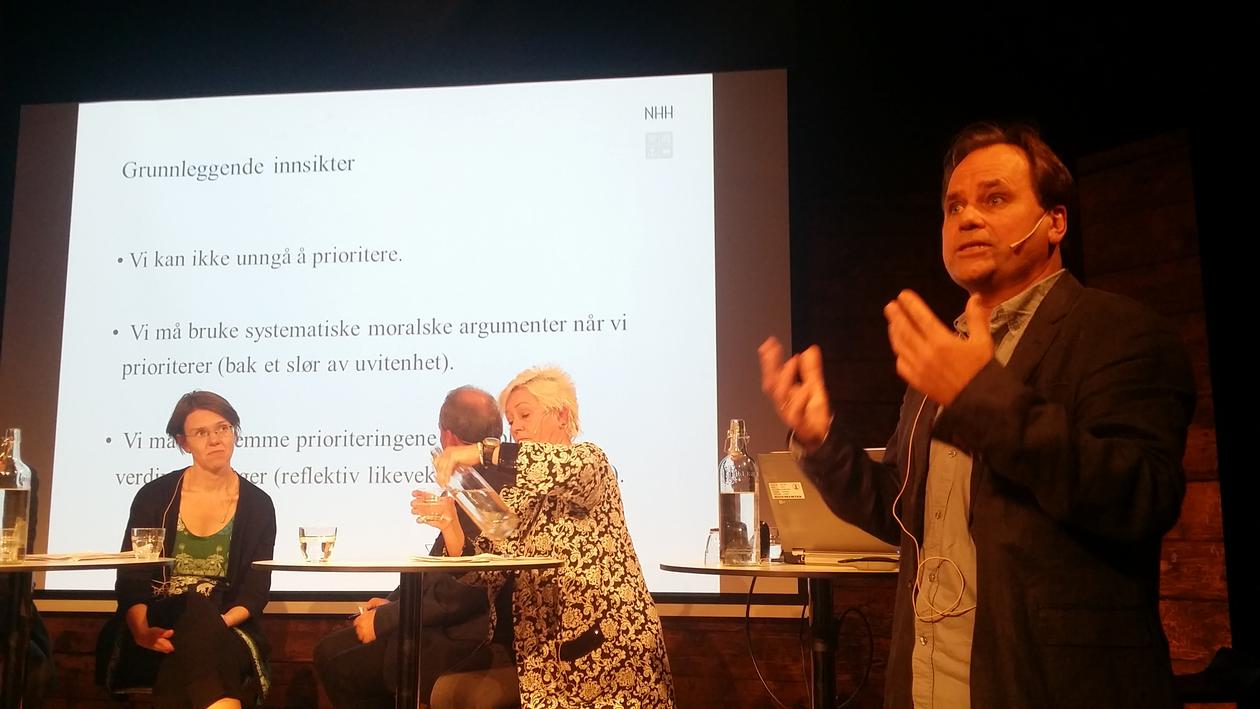 Bertil Tungodden, professor at NHH and co-director of the Choice Lab, works with the issue of justice. His work shows that people are more than anything concerned with justice in the priority debate. We need to feel that the distribution of resources is fair. Tungodden also wants to add the question of personal responsibility to the debate. Who should pay for lifestyle related diseases and injuries?
Photo:
Geir Olav Løken 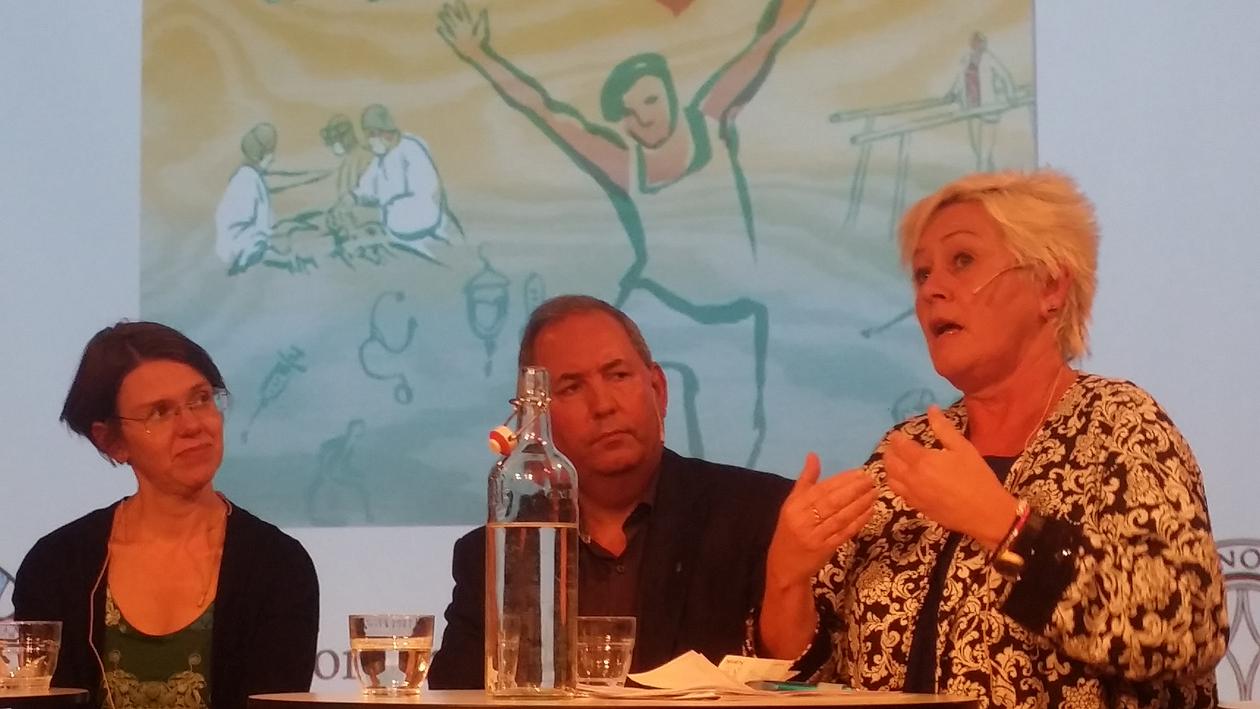 Secretary General of the Norwegian Cancer Society, Anne Lise Ryel, feels that attention to expensive treatment is taking too much of the prioritization debate. There are countless other examples in Norwegian healthcare that need focus. She also raises the issue why people who choose to buy expensive cancer drugs that are not covered by the public system, must go to private clinics instead of being treated by his/her own doctor.
Photo:
Geir Olav Løken 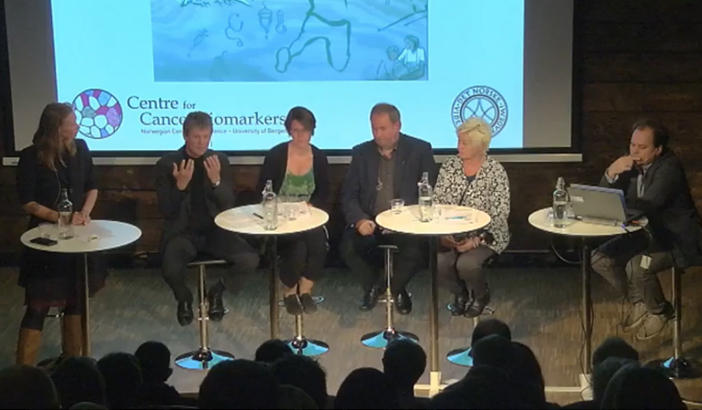 Ole Frithjof Norheim as leader of the Prioritization Report Committee got to be recipient of many of the questions from the audience.
Photo:
CCBIO, UiB 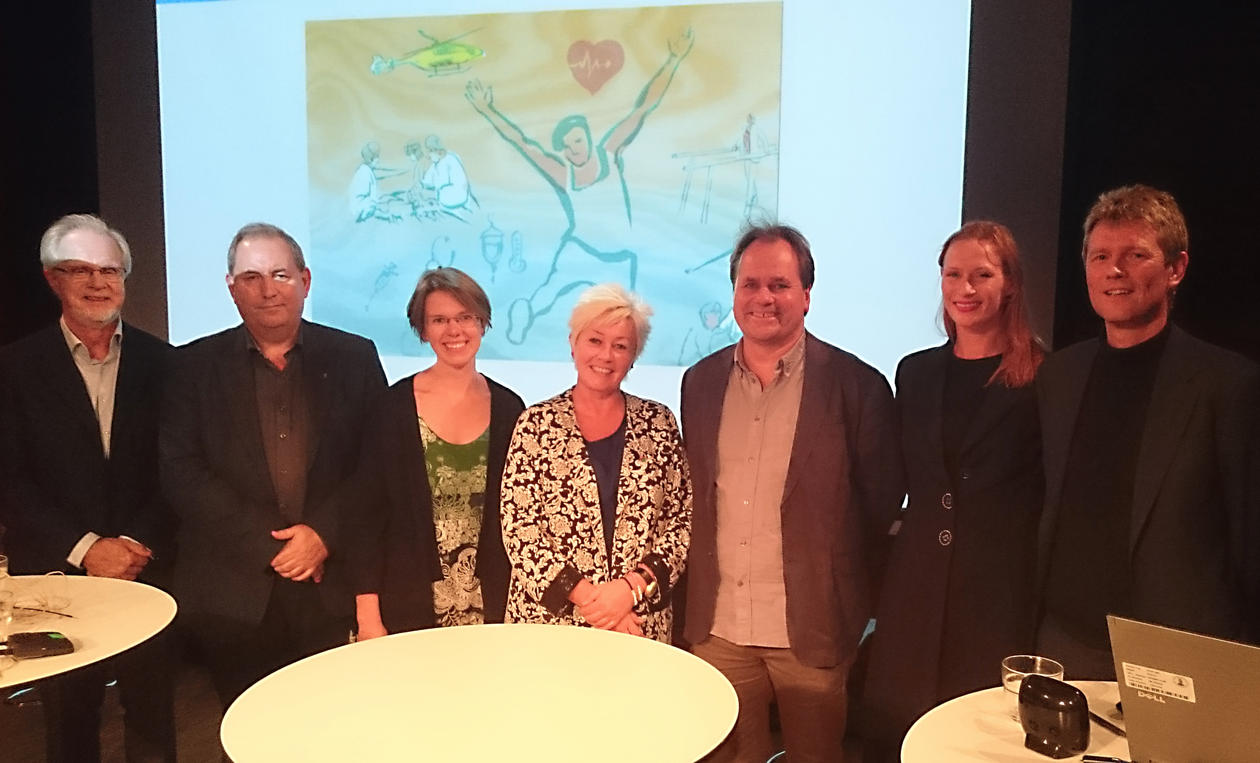