text and photos by Courtney Flanagan

Marvin Lilley worked for the fire department during college. He probably had no idea that looking for smoke would in a sense end up as his career in a very different context!

Marvin has had two major functions on this cruise: sampling for volatiles and work on analyzing the concentration of gases, and finding a black smoker. Obviously, he did a very good job!

He began his career as a chemist, working for Major Daley at the Chicago Board of Health! He was not totally happy as a chemist however, which led to his move to Oregon to work as an oceanographic technician, and his first cruise in 1977 on the ship that discovered the first black smoker in the Pacific, near the Galapagos Islands. What was particularly exciting about it was the discovery that there was animal life at the vent. The cruise had a shipload of geologists and chemists, but only one biology student because although vents had been presumed, no one had speculated that there would be animal life! As soon as the fauna was seen, the biologists on shore were spectacularly excited, and bombarded the ship with requests for samples.

Marvin has personally been involved in the discovery of eight vent sites, the first in 1990 at the Juan de Fuca Ridge in the northeast Pacific. That particular vent was found almost by accident. They were dredging for samples, and pulled up sulfides. They then found four more with CTD samples.Reading the signals from the CTD (conductivity, temperature, density) is Marvin's specialty.

On this ship he was doing this almost round the clock. (The teachers aren't frankly sure when Marvin slept; but he seemed unflappable, showing up every morning for breakfast with no sign of fatigue!) He analyzes the CTD water especially for methane and hydrogen, two almost sure clues that a vent field is in the neighbourhood! He also looks for Helium. 3He is a Helium isotope that is never found on earth. It was only formed when the earth began. Therefore its presence is a definite signal of the presence of magma in the water, and thus of a vent.

Marvin shared with us that this particular vent field was especially difficult to find because of two challenges.
For one thing, the underwater current kept changing so it was difficult to pinpoint the site. He knew it was there somewhere, but where? The thought is that this may be due to the crossing of the fault lines. The other challenge was the complex topography of the sea floor at this point, something not unusual to find in an area near the slow spreading plates of the Mid-Atlantic Ridge. From watching the video transmission of the seafloor, this writer can attest that the seafloor where we were looking for the vents was truly complex. If a person could hike down there, it would be a strenuous one! Looking for the vent, as one of the researchers attested, was sort of like finding a needle in a haystack.

This is the eighth vent field of whose discovery Marvin Lilley has been part.. Because of the difficult we had in finding it, and the very impressive end result, he considers it particularly satisfying. "It's always exciting," said Marvin, "but this one has to be near the top of the list."

Once the vent was found however, Marvin's job was not over; he moved into the second part of his job description: analyzing the gases. Of course there are challenges because of the great pressure in the deep ocean. One can't just take a water sample and bring it to the surface; when the pressure changes the gases will bubble out of the water. So, he sends down with the ROV an instrument that takes a water sample and keeps it under pressure. It looks to me like a giant hypodermic needle! Once on the ship, the sample is put through a sort of Rube Goldberg looking machine, which takes the gases out of the water and stores them. If this procedure were not followed, the microbes in the water would have eaten the gases long before Marvin could get them back to Seattle and further analysis!

Marvin Lilley obviously loves the excitement of making a discovery, but he also likes simply being at sea with a group of scientists - the camaraderie of a group solving a problem, doing "their bit to finding out how the earth works!" Certainly he had done his bit on this cruise!

Marvin Lilley is a professor at the University of Washington in Seattle. 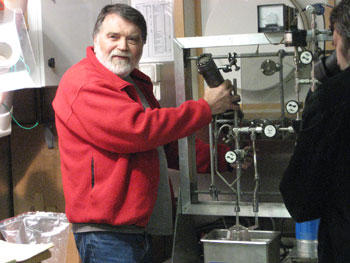