SNOWISO field season started at the EastGRIP camp, on the Greenland Ice Sheet.

The Basler (DC-3), called the Polar 5, which will bring the SNOWISO team up on the ice is owned by the Alfred-Wegener-Institute.
Photo:
Hans Christian Steen-Larsen

On the afternoon of May 13th, the first team from the ERC supported SNOWISO project landed on the Greenland Ice Sheet. The Alfred-Wegener-Institute owned DC-3 airplane, named Polar 5, landed safely – bringing along PhD candidate Sonja Wahl, Principal Investigator Hans Christian Steen-Larsen, and more than one ton of cargo, including the scientific equipment needed for operating the SNOWISO project until August.

Together with researchers from Denmark, Germany and the USA, they'll collaborate to further understand how ice cores have recorded climate going back over one hundred thousand years. One such ice core record is obtained just next to the SNOWISO field operations, at the EastGRIP camp.

SNOWISO is expecting to collect more than five thousand samples of the snow surface in order to make the link between the measurements conducted in the atmosphere and the climate signal in the snow.

The infrastructure and staff available at the camp allows the most comprehensive suite of measurements ever conducted of water isotopes simultaneously in the snow, vapor, and precipitation. As part of the instrument package is state-of-the-art cavity-ring-down-spectrometers capable of making direct measurements of the water vapor isotopic composition and three complete sets of Eddy-Covariance systems measuring meteorological parameters.

Not quite as big as the usual LC-130 plane used to fly the SNOWISO team up to EastGRIP, the Basler (remanufactured DC-3) is a lot more comfortable despite the large amount of cargo.

Six months ago, the EastGRIP Steering Committee decided on the science plan for the summer campaign. The SNOWISO team and their international collaborators have since been focused on deciding which measurements were needed to answer the scientific questions.

But what does one need in such environments? Cargo flights up on the ice are rare, so it's crucial to not forget any parts. A critical part of planning was making sure each important part of the needed scientific equipment was packed into the more than 15 individual cargo boxes.

Getting there is almost half the job

“Organizing a large international collaboration with many partners are always exciting, but also challenging, as it is easy to forget small, but crucial parts needed for the measurement," says Hans Christian, PI of the SNOWISO project at the Geophysical Institute, University of Bergen and the Bjerknes Centre for Climate Research.

"It is easy to think that somebody else is responsible for remembering individual parts, so communication is key to success”

Sonja and Hans Christian have been using the time at the field operating coastal base camp in Kangerlussuaq, where they arrived Friday, getting all the boxes ready for loading on the airplane and making plans of priority tasks to do the first days that they are in camp.

Every day on the ice counts, so it is important to get the measurement systems up and running as soon as possible.

This will be Sonja’s second field season on the Greenland Ice Sheet and she will be spending two months in total in the cold conditions. Earlier this year she came back from a field season in Antarctica, which also gives valuable experience for the coming summer.

“It is going to be exciting to get back up on the Greenland Ice Sheet. Last year was my first field season on the ice, so I was naturally a bit nervous for what to expect, but after the field campaign in Greenland last year and the field campaign in Antarctica earlier this year, I know what to expect, and look forward to be in the wide white again,“ says Sonja, adding on:

“Of course two months on the ice seems like a long time, but the camaraderie, and sense of working together with your international collaborators towards a common goal, makes time fly by fast."

Sonja Wahl making a detailed task plan for when landing on the ice.

She says it was difficult to explain her experiences in the field, being so different from everyday life, but: "now it seems that they have come to get used to me spending my summer in winterly conditions."

Once the two month field season is finished the work is far from done. Back home in the laboratories the snow samples will be measured and the in-situ and laboratory data obtained from the different instruments will be merged and analyzed.

“This is a very exciting field season. We have a lot of measurements coming together and a great team of PhD students and scientists working hand in hand,“ says Hans Christian.

Flying in over EastGRIP base.

Isotopes are, simply put, atoms with a specific composition. The isotopic composition of water molecules varies, for instance due to temperature, and in this way the isotopes contain an "image" of the climate at a given point in time.

The use of ice core records as climate archives thus mainly relies on the assumption that the state of the climate determines the isotopic composition of precipitation, which is "stored" in ice, and can later be analyzed in ice cores.

The ERC Starting Grant project SNOWISO (Signals from the Surface Snow: Post-Depositional Processes Controlling the Ice Core Isotopic Fingerprint) questions this view, with the hypothesis that the isotope record from an ice core is determined by a combination of the precipitation isotope signal and the atmospheric water vapor isotope signal above the snow surface.

Placed at the Geophysical Institute, Faculty of Mathematics and Natural Sciences, the project lasts from 2018-2022.

The East Greenland Ice-Core Project (EastGRIP) is drilling 2550 meters through an ice stream in the North East of Greenland. It will produce an ice core archive of the past tens of thousands of years.

The project is led by Centre for Ice and Climate is a centre of excellence at the Niels Bohr Institute, University of Copenhagen, and has partners from twelve nations. The Bjerknes Centre for Climate Research is one of them. 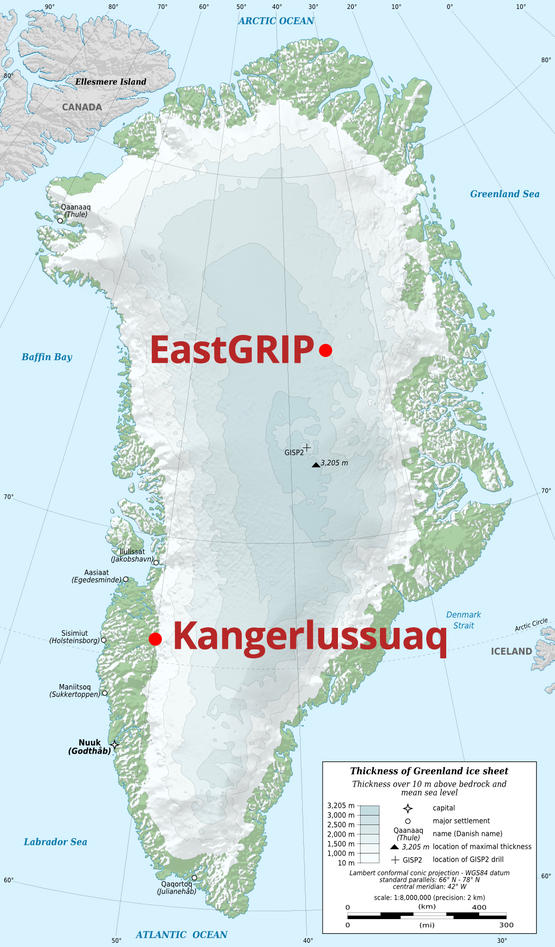