It is time for finally realizing that the planet Earth on which we live is only finite in space, capacity and natural resources.

The lecture (held in English)
During the long history of mankind, planet Earth seemed to be an infinitely large place. The earth was so immense that the impact of human activities to the biosphere seemed quite negligible. But after the industrial revolution and especially in the twentieth century things have changed dramatically. World population increased from 1.5 billion to 6 billion in the twentieth century and has reached 7.2billion this year. And with the advancement of communication and transportation, the earth has shrunk in relative terms.

This sudden transition from “unlimited earth” to a “limited earth” has extremely significant consequences, yet the development of human society, moving along the track of infinity for a long time, has not seemed to be able to adapt to the new reality that the earth is “limited”. On the “limited earth”, perhaps the most important challenges for scientists are problems related to the climate change and environmental degradation, together with unsustainable production and consumption. Without immediate action and transformation, the survival of human society will be seriously threatened.

This is the first time in human history that all human beings on Earth have been faced with learning to work together and live together as one family in a global village – the time for finally realizing that the planet Earth on which we live is only finite in space, capacity and natural resources. Our future depends entirely on how effectively the entire world would function as a community. This is a necessary awakening – vital for the survival and sustainable development of mankind. I believe that if we make the correct choice at this crossroads, then the 21stcentury is likely to be marked as the great turning point, or great transition – the beginning of a new era in the history of mankind.

Refreshments will be served before the lecture, which starts at 16.15 pm in, on Thursday 28th of May. Everybody is welcome! 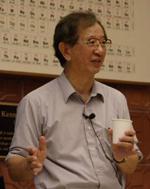