The 4-year project ProVolo was funded by the basic research programme (FRIPRO) of the Research Council of Norway for the period 2016-2020.

ProVoLo is a coordinated, basic research study to observe, understand, and quantify the fundamental processes that shape the oceanographic structure of the Lofoten Basin. The Lofoten Basin, situated in the northern Norwegian Sea, is emerging as a fundamental player in our climate and fisheries. In this area the warm and salty Atlantic Water is subject to the greatest heat losses anywhere in the Nordic Seas. The Lofoten Basin is energetic: it stands out as a hotspot in the maps of eddy kinetic energy including the slope region associated with eddies shed from the Norwegian slope current, and a maximum at the center of the basin associated with a long-lived, deep and large eddy (Lofoten Basin Eddy, LBE).

The study addresses the water transformation processes in the three distinct and important regions of the Lofoten Basin: the steep Norwegian continental slope, the basin pooling the warm Atlantic Water, and the frontal region over the rough Mohn Ridge.

The main approach is a combination of theory, numerical modelling and an observational programme. The field component includes dedicated process cruises in summer and in winter coordinated with deployments of moorings, underwater gliders, and deep floats.

Specifically, we address the hypotheses

Summary of activity and results

The project started with intensive field work in the first 2 years. The first scientific cruise was conducted in June 2016. The summer cruise was followed by a winter process study in March 2017, and the last cruise in September 2017. In all cruises, measurements were made of ocean current, temperature, salinity and microstructure profiles.

The first scientific cruise was conducted in June 2016. Surveys and process studies were made in the LBE in the central basin as well as near the Mohn Ridge. Operations included ocean current, temperature, salinity and microstructure profiling, moorings, subsurface and surface drifters, and ocean gliders. Gliders, moorings and subsurface drifters (RAFOS floats) collected data from summer 2016 to fall 2017. The summer cruise in 2016 was followed by a winter process study in March 2017, and the last PROVOLO cruise in September 2017. In this last cruise, we recovered all instruments and collected new data.

A set of glider missions and RAFOS floats concentrated in the Lofoten Basin and the LBE. A second set of glider missions and RAFOS floats sampled the Mohn Ridge frontal region. The moorings concentrated on the slope current in the Lofoten Escarpment, as well as a deeper energetic location. Seagliders are underwater robots, which profile the upper 1000 m of the water column and send the data directly to your office (see NorGliders). The missions can be controlled by satellite communication when the glider is at the surface. Neutrally buoyant RAFOS floats drift freely through the ocean and trace out the movement of waters. A total of 18 RAFOS floats were deployed in the LBE, at the centre, at the radius of max speed (15 km) and at a radius of 30 km, with target depths 200, 500 and 800 m. Another set of 7 RAFOS floats were deployed across the Mohn Ridge.

All data sets are submitted and openly available from the Norwegian Marine Data Centre:

The links to the data sets also include related reports and details. Using this unique data set, we described the circulation patterns, dynamics and water mass transformation processes in the Lofoten Basin and over the Mohn Ridge. Our observations make a step change in the available data sets from the region and in our understanding of the physical oceanography in the region.

We first analysed 3 years of legacy data from Seagliders which sampled the LBE in unprecedented detail [Yu et al., 2017]. A comprehensive description of the vertical and radial structure, evolution in time, and dynamical characteristics of vortex was obtained. The evolution of the core water properties showed large interannual variability. We next gathered observational data sets from different sources covering the period between 2000 and 2017 to describe the transformation of Atlantic Water in the Nordic Seas. A detailed analysis [Bosse et al., 2018] shows that the western Lofoten Basin is an important location for spiciness injection (temperature and salinity increase) by winter mixing and Atlantic water transformation.

Turbulence (dissipation rate) observations made for the first time showed a significantly turbulent vortex between 750 and 2000 m, when contrasted to a reference station in a relatively quiescent part of the basin [Fer et al., 2018]. The sources of energy for the observed turbulence were identified as the background shear below the deep velocity maximum and the subinertial energy trapped by the negative vorticity of the eddy. Based on these summer observations, a time scale of 14 years was inferred to drain the total energy of the eddy, consistent with a long-lived LBE. Combining all ProVoLo observations in the Lofoten Basin, a dynamical description of the evolution of LBE was presented [Bosse et al., 2019]. The vortex was vertically coherent with most drifters from the surface to more than 1000m depth trapped for their whole deployment time (up to 15 months). Winter could be identified as the season prone to lateral exchanges between the vortex core and the surrounding. Interactions with other eddies were observed. An energy budget revealed the importance of winter convection in modulating energy of the vortex.

The front current along the Mohn Ridge was characterized for the first time, using repeated sections over 14 months from autonomous gliders and two research cruises [Bosse and Fer, 2019a]. The mean transport of Atlantic Water was 3.2 ± 0.2 Sv (1 Sv = 106 m3 s-1), with maximum values in the fall and a seasonal variability of 0.8 Sv. The deep currents at 1,000 m accounted for most of the total transport, and explained most of this seasonal variation. This transport component has often been neglected in previous studies. We found that the front current is at least as strong as the slope current at the Svinøy section (63°N). The slope current, well-documented at the Svinøy section, accelerates along steep topography off the Lofoten Escarpment. Here, there are no published moored current observations, and the transport and variability of the Atlantic Water in this region is not known. It is hypothesized that the current becomes unstable and eddies shed form the slope current contribute to the basin. Observations from the ProVoLo moorings are analyzed to describe the slope current at the Lofoten Escarpment [Fer et al., 2020]. The data set covered a 14-month period from June 2016 to September 2017, and resolved the core of the slope current which showed a strong seasonal cycle, with largest currents observed in winter reaching 80 cm s-1. The slope current was strongly depth-dependent, in contrast to the barotropic current in the Svinøy section. The average transport was 2.8 Sv, with summer and winter averages of 2.3 and 4.0 Sv, respectively. Calculated energy conversion rates imply that baroclinic instability, rather than barotropic instability, contributes to the mesoscale variability at the Lofoten slope.

In addition to the observation-based research, we utilized numerical models and, in particular, Lagrangian analysis of trajectories from the model fields. In the first numerical study [Dugstad et al., 2019a], we used both the observed surface drifters and the Lagrangian particles at the surface level from a 4-km spatial resolution regional ocean model to estimate the mass and heat exchange of Atlantic Water with the Lofoten Basin. The warm Atlantic Water that was cooled in the basin entered the Lofoten Basin as a slab from the south. The result was contradictory to some earlier studies that had pointed out that the main exchange of Atlantic Water with the Lofoten Basin was related to eddies shed off from the slope current. The heat flux convergence analyses indicated that the exhange with the Lofoten Basin was mainly dominated by the mean flow at surface, but by eddy fluxes at deeper levels.

These findings initiated further research with a larger amount of Lagrangian simulations (about 1.5 mill. numerical particles) in model fields with an increased spatial resolution of 800 m [Dugstad et al., 2019b]. Furthermore, the Lagrangian particles were deployed not only at the surface level, but also at 200 m and 500 m to investigate the vertical structure of the exchanges and pathways in the Lofoten Basin. We identified two main inflow pathways, one close to the Lofoten Escarpment in the southeast, associated with the slope current, and another close to the Helgeland Ridge in the southwest, associated with the front current. These routes were important for heat exchange, manifested strong seasonal variability, particularly in the Lofoten Escarpment inflow, with a pronounced vertical structure. At deeper levels the seasonality was weaker and the two branches were more distinct. The trajectories were further analyzed in detail in [Dugstad et al., 2021] to describe the eddy field in the Lofoten Basin, using multivariate wavelet ridge analysis. We identified coherent cyclonic and anticyclonic vortices in the trajectories and described their characteristics. We compared the evolution of water properties inside cyclones and anticyclones as well as in the ambient flow outside vortices. The ambient flow, including filaments and other non-coherent variability undetected by the ridge analysis, was found to play a major role in closing the budgets of the basin.

Finally, theoretical and modelling studies were done on the stability of key flow features in the region. In Bashmachnikov et al. [2017] the stability of the LBE in the central basin was studied by idealized quasi-geostrophic stability calculations as well as by diagnosing realistic ocean model simulations. The study showed that the LBE is hydrodynamically unstable but that growth rates are low enough that the eddy has time to undergo both wintertime convection and mergers with other anticyclones before breaking up. In Ghaffari et al. [2018] the stability of the slope current was investigated with an aim to assess the relative role of barotropic to baroclinic instability in generating the eddy field that is shed from the current. Results showed that both instability processes are present, but that the steep bottom slope suppresses growth of baroclinic instability more than it does barotropic instability.

A coordinated study to observe, understand, and quantify the fundamental processes that shape the oceanographic structure of the Lofoten Basin. 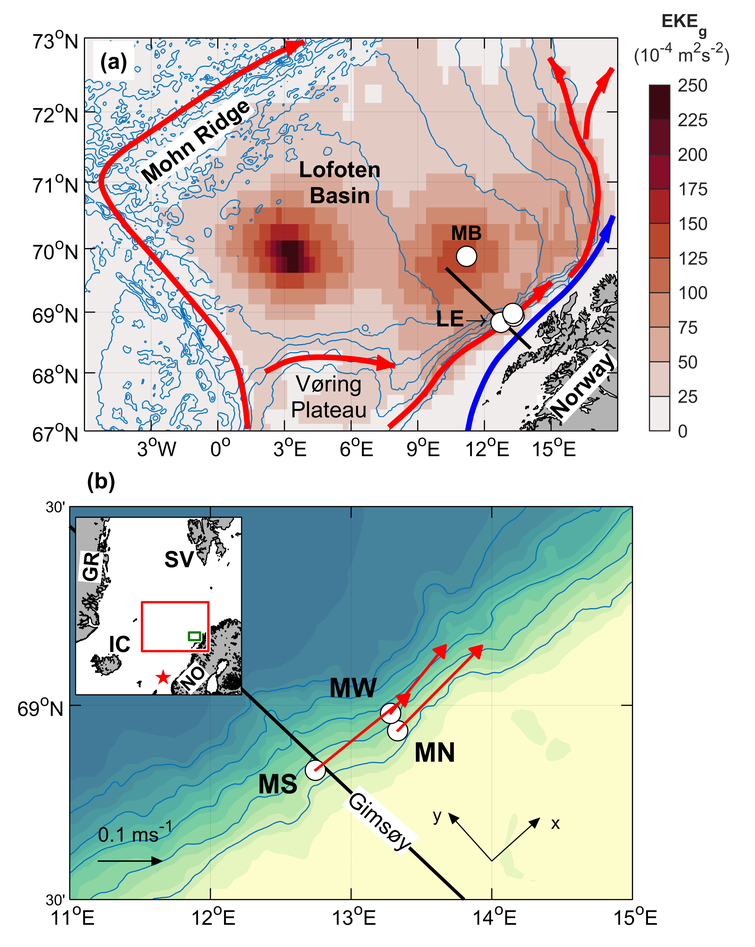 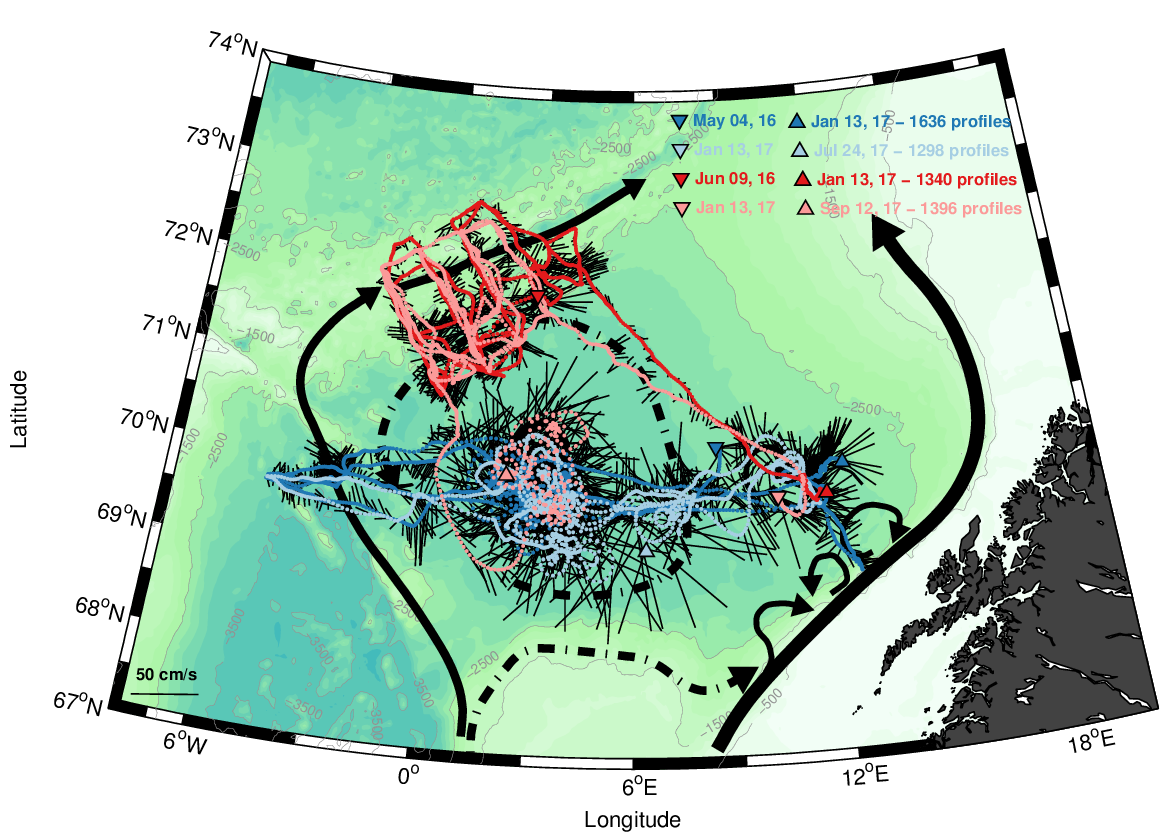 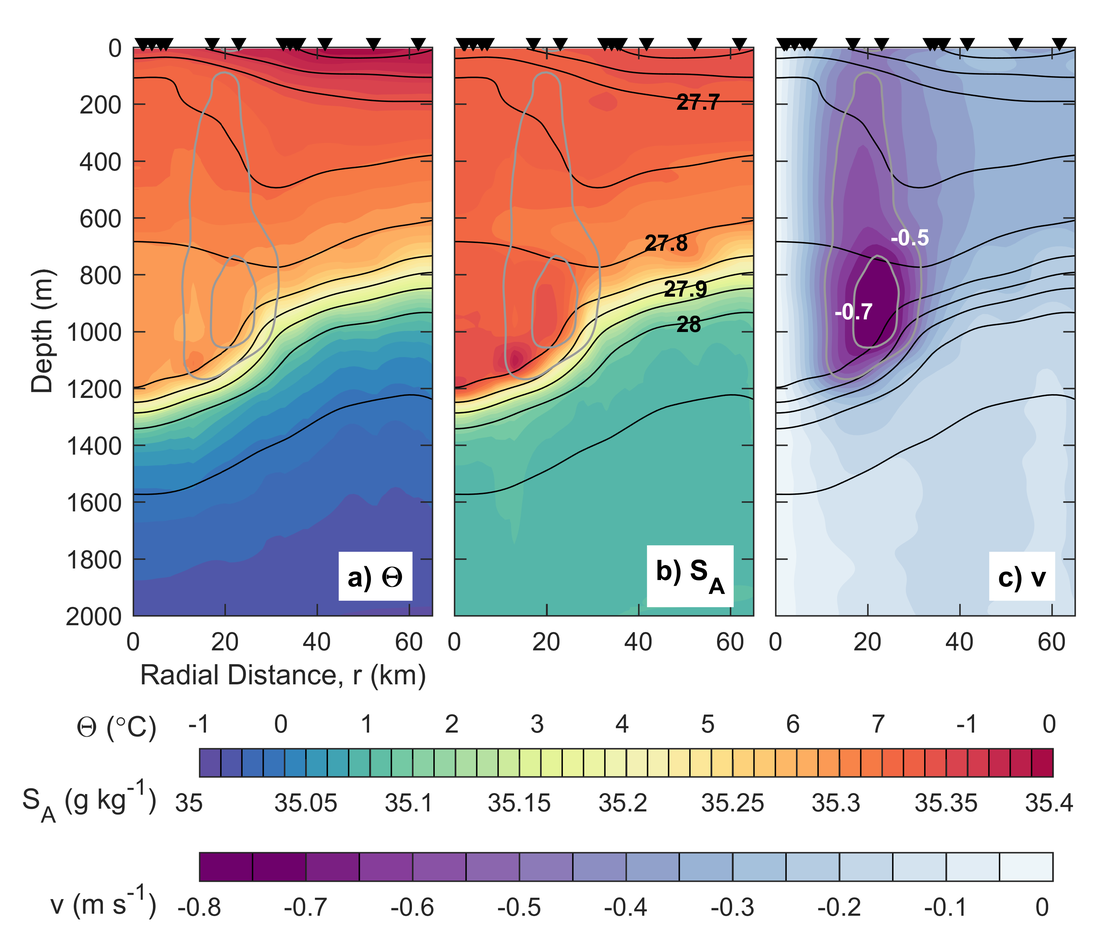