Professor Michaël Tatham from the Department of Comparative Politics has authored the University of Bergen’s (UiB) best social-science publication of the past year.

That’s the decision of the Faculty of Social Science board, who awarded Tatham its 2017 Publication Prize.

The prize was awarded June 13, and recognizes the best social science book, chapter or paper published by a UiB researcher that best exemplifies “high scientific quality, originality and innovation” in the previous year.

The prize is for Tatham’s work With, Without or Against the State? How European Regions Play the Brussels Game.

Published last year, the book explores the political role of regions within the European Union. It reveals that while sub-state regions are increasingly vocal within the EU, they often speak in unison with their member states. This is especially the case when regions enjoy decentralized power.

In picking a prizewinner, the faculty board considered whether publications have generated new knowledge, were published by a top-flight publisher, and have garnered academic (and particularly international) attention.

Tatham’s work did all three, says Gunnar Grendstad, the chair of the Department of Comparative Politics.

In nominating Tatham’s book, Grendstad lauded it as “the culmination of 12 years of theoretical and empirical work. The book’s research is innovative and breaks new ground both theoretically and methodologically.”

Grendstad noted that the book contravenes prior assumptions about regional behaviour. It was published by Oxford University Press, among the foremost academic publishing houses. And it quickly garnered scholarly attention, including raves in several academic journals.

“It is unusual for a book to be so quickly reviewed in international peer-reviewed journals,” Grendstad wrote. “All reviews acclaimed the book as a major contribution.”

This is the second year in a row that a SAMPOL scholar has won the Social Science Faculty Publication Prize. Last year’s recipient was Professor Georg Picot, for his article “European Welfare States and Migrant Poverty: The Institutional Determinants of Disadvantage.” 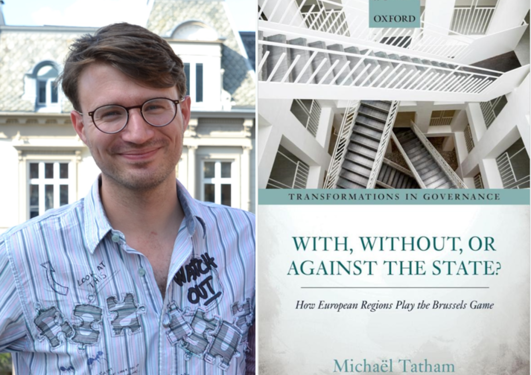 In his new book, Professor Michaël Tatham explores how states and their sub-state regions cooperate (and sometimes clash) in the EU