Democracy and its defining characteristics have long been a subject of study among social scientists. There is good reason for this: democratic systems bring with them a number ofadvantages, not least an improvement in overall human wellbeing (Warren, 2002). Indeed, thebasic principles of democracy suggest that all or almost all citizens are to be—more or less—equally included in the decisions that govern them. Dahl (1971, 1998) argues that democracyimplies that governments are representative of citizens and policies are responsive to them.Moreover, and perhaps more crucial for the concept of democracy even, citizens should bepolitical equals, i.e., they should have equal chances and opportunities to have a say in thedecisions that govern them.

Over several decades, political science has made important contributions to ourunderstanding of how democratic representation—the mechanism through which many of ourdemocracies functions—works. Spanning empirical research and political theory, this everexpandingbody of work has critically examined whether contemporary democracies live upto the Dahlian standards of democracy, why this is so, and how the situation could beimproved if deemed necessary. Some of these studies have been more optimistic (e.g.,policies seem generally to follow the public’s political ‘mood’), while others express moreconcern (e.g., there are groups in society that are more likely to be responded to than others).

Scholars working in this area have adopted different approaches to studying thesequestions of representation and political equality. One approach has been to focus mostly oncongruence – namely, the match between citizens’ preferences and representatives’preferences; another has been to focus more on responsiveness by examining how accuratelypolicies or representatives change according to a change in public opinion. Another difference of approach is the focus on policies or other forms of output versus legislators’ attitudes andbehavior. Furthermore, some research deals more generally with representation in terms of political ‘mood’ or a super-issue, while other research deals with (multiple) specific issues or policies. Besides these differences in substantive focus, studies also vary in terms of their methodological approach.

This workshop deals with two issues fundamental to the nature and functioning of democracy: representation and political equality. In the past half-century, high-income, established democracies have seen numerous changes relevant to representation and political equality. These include decreasing electoral participation and increasing distrust in political institutions and anti-immigrant (and anti-EU) sentiments. Moreover, international commitments and the recent economic crisis have imposed constraints on governments that affect the kinds of policies they can pursue. Economic inequality has also increased in many established democracies. Against this backdrop, this workshop brings together scholars who aim to analyze two elements vital to democracy: on the one hand, representation (citizen-to-representative congruence/responsiveness; policy congruence/responsiveness; and perhaps even ‘responsibility’); and on the other hand, political equality (equality in representation).

These are directions once you’re in the building at 124 Mt. Auburn:

– In the lobby of the building, take the north elevators next to the Fooda sign to the 2nd floor and suite 200N.

– On the left when you exit the elevators, there are glass doors that lead into the lobby of the Ash Center.

– In the lobby of Ash, take a right down a long hallway towards a group of cubicles.

Lobbying Influences What Laws are Enacted

The median voter model for democratic redistribution, known as the Meltzer-Richard theorem, tells us that the demand for redistribution increases if the median voter earns less than the average income, i.e. when income inequality within a country reaches a certain threshold. However, government does not necessary follow citizen preferences. As Acemoglu et al. (2013) show, democracy has no clear effect on income inequality. The question then remains whether governments are able to produce policy that is in favour of those who demand more redistribution, specifically when this group consists of a majority of the citizens. By analysing data from European countries from 2002 to 2016, biennial, using Bayesian multi-level analysis, this paper sets out to investigate whether a systematic bias towards the more affluent in terms of redistirubtional policy-output affects the voters satisfaction with the way democracy works (, and also the perceived legitimacy of the regime). It is hypothesised that high demand for redistribution from the low- and middle-income groups and low responsiveness from the government to said groups, their satisfaction with the way democracy works declines.

What does women's presence in political institutions signal to citizens? Are signals different based on the representative body's decision? And do women and men respond to women's presence similarly? Though scholars have demonstrated the substantive and symbolic benefits of women's representation, little work has examined how women's presence affects citizens' perceptions of democratic legitimacy. We test the relationship between representation and perceived legitimacy through survey experiments on a nationally representative sample of U.S. citizens. First, we find that women's equal presence legitimizes decisions that go against women's interests. This effect is particularly pronounced among men, who tend to hold less certain views on women's rights. Second, across decision outcomes and issue areas, women's equal presence legitimizes decision-making processes and confers institutional trust and acquiescence. These findings add new theoretical insights into how, when, and for whom inclusive representation increases citizens' perceptions of democratic legitimacy.

Disentangling The ‘Sanction-Policy’ Linkage: Public Perceptions And The Influence Of The Party System

In its dynamic conception democratic responsiveness is described as the correspondence between the actions undertaken by governments and the preferences expressed by the majority of citizens. This declination of representation also implicates the existence of a bottom-up process that under certain conditions allows citizens to influence government’s preferences and shape the policy-making process.

Moving from the conceptualization of representation as a ‘chain’ that through connected stages links citizens’ preferences to policy outcomes, the present article aims to analyze the ‘sanction-policy’ linkage connecting electoral accountability and responsiveness. It empirically tests the anticipatory effect of electoral accountability on government responsiveness from the perspective of citizens and investigates if the perceived existence of an effective mechanism of sanction makes governments more likely to adopt policies in line with voters’ preferences. Finally, the article also examines the potential moderating effect exerted by specific configurations of the party system – namely fragmentation, volatility and polarization – on the main relationship.

The study is conducted on individual-level data from 25 European countries included in the sixth round of the European Social Survey integrated by country-level data that capture specific characteristics of the party system. Results of multilevel analysis supports the statements about the influence of electoral accountability on responsiveness and the conditional effect of the party system.

Doing Well and Doing Good? How Concern for Others Shapes Policy Preferences and Partisanship Among Affluent Americans

Previous research has identified non-material considerations as especially important in shaping the political views of affluent Americans. While other scholars have focused on social issues like abortion or gay rights, or on collective goods like environmental protection, we explore the role of altruism in shaping the economic policy preferences and partisan identification of high-income Americans. We argue that altruistic concern for the well-being of the less well-off leads many affluent Americans to support anti-poverty policies and the Democratic party. Using measures based on actual giving behavior, we document that altruism matters little for low-income Americans' preferences and partisanship, but has substantively large effects on the affluent, leading altruistic high-income Americans to be substantially more supportive of anti-poverty policy and the Democratic party than their less altruistically-inclined high-income peers. Our findings help to explain why a government that responds primarily to the wishes of the well-off may still pursue policies designed to help the poor.

Affluence and Congruence: Unequal Representation Around the World

Do elected representatives reflect the preferences of the citizens they represent? Recent studies from the U.S. have found that elected representatives tend to be more responsive to the preferences of affluent citizens. But we still know little about why this bias exists. We examine whether a similar affluence bias exists outside the U.S. and why. We gathered every available survey of national legislators in the world and matched it with mass survey data. Using a variety of methods, we identify how closely the distribution of legislators matches that of citizens. Around the world, legislators' preferences are consistently more congruent with those of affluent citizens. But we find no comparative evidence for any of the mechanisms proposed by studies in the U.S. There seems to be something general about modern electoral democracies that makes representatives disproportionately more congruent with the rich-but we still do not know what that something is.

The global expansion of the Internet population across the world is considered as an important asset which enables new deliberative spaces for political participation and provides citizens with direct access to government. However, there is a growing research that shows increasing levels of digital inequality. While the gap between the ones who have and have not access internet is decreasing, many observers noted that there is a socio-economic difference between the online and offline population. In this paper, I will analyze the relationship between digital inequality and political participation. In order to better understand the individual level relation between digital access and political participation, I will rely on comparative electoral survey data to analyze how internet is related with the political inequality. I hypothesize that there is strong relationship between partisan identification and online political participation and there is an ideological gap between politically involved individuals online.

While a multitude of studies have investigated the link between opinion and policy, we have little knowledge how organized interests affect this linkage. We argue that the alignment of organized interests affects policy representation by influencing the weight decision-makers attach to citizen preferences. We test our theoretical claim drawing on a comprehensive media content analysis of 160 policy issues in Germany and Denmark between 1998 and 2010. Our results show that public opinion only affects the likelihood of policy change on issues that enjoy considerable support among the organized interests on an issue. Moreover, policy is generally more likely to be aligned with public majorities whose view is supported by the bulk of the active organized interests. The findings underline the importance of considering the role of organized interests in the study of policy representation and have implications for democratic governance. 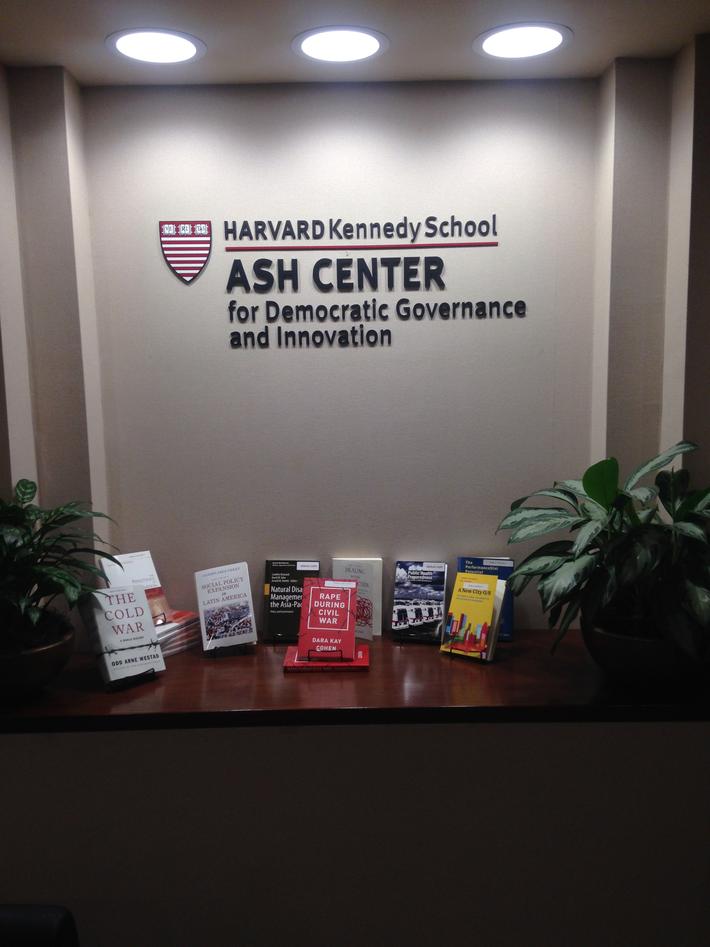 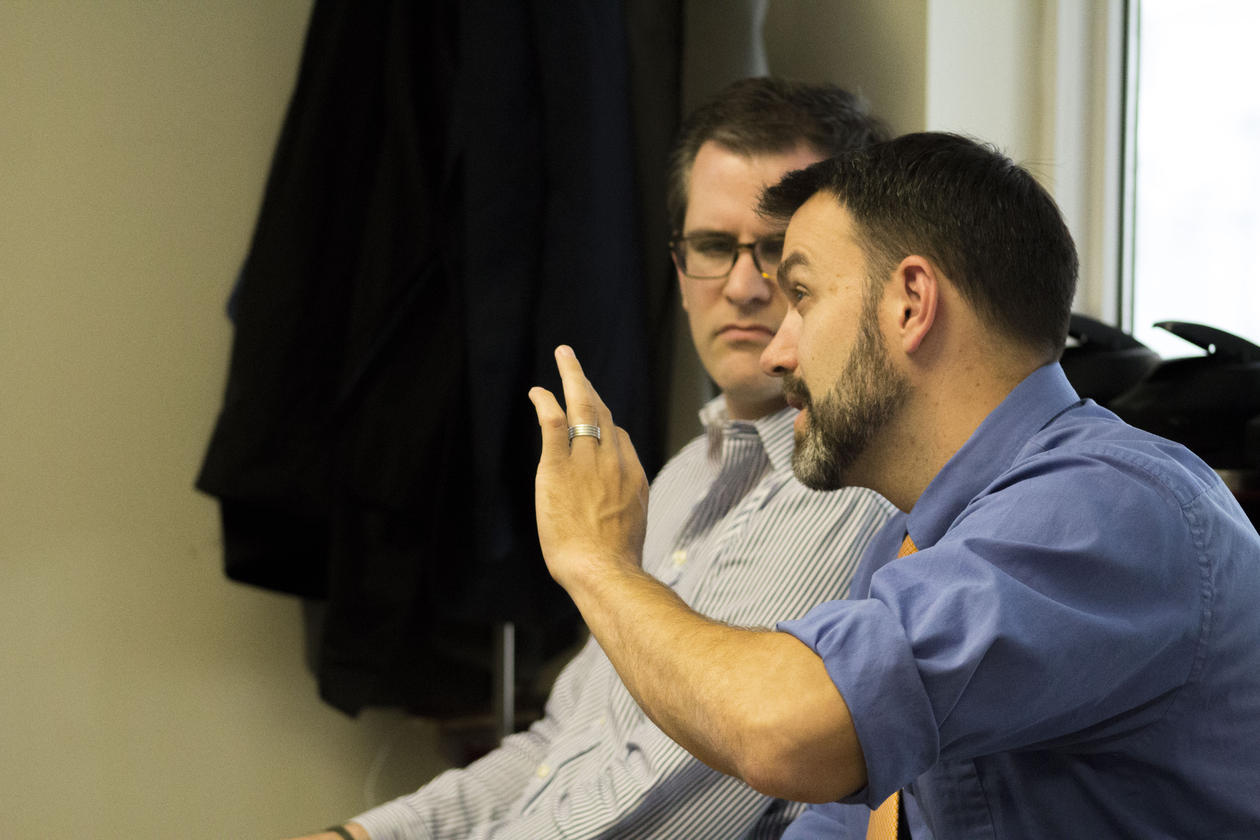 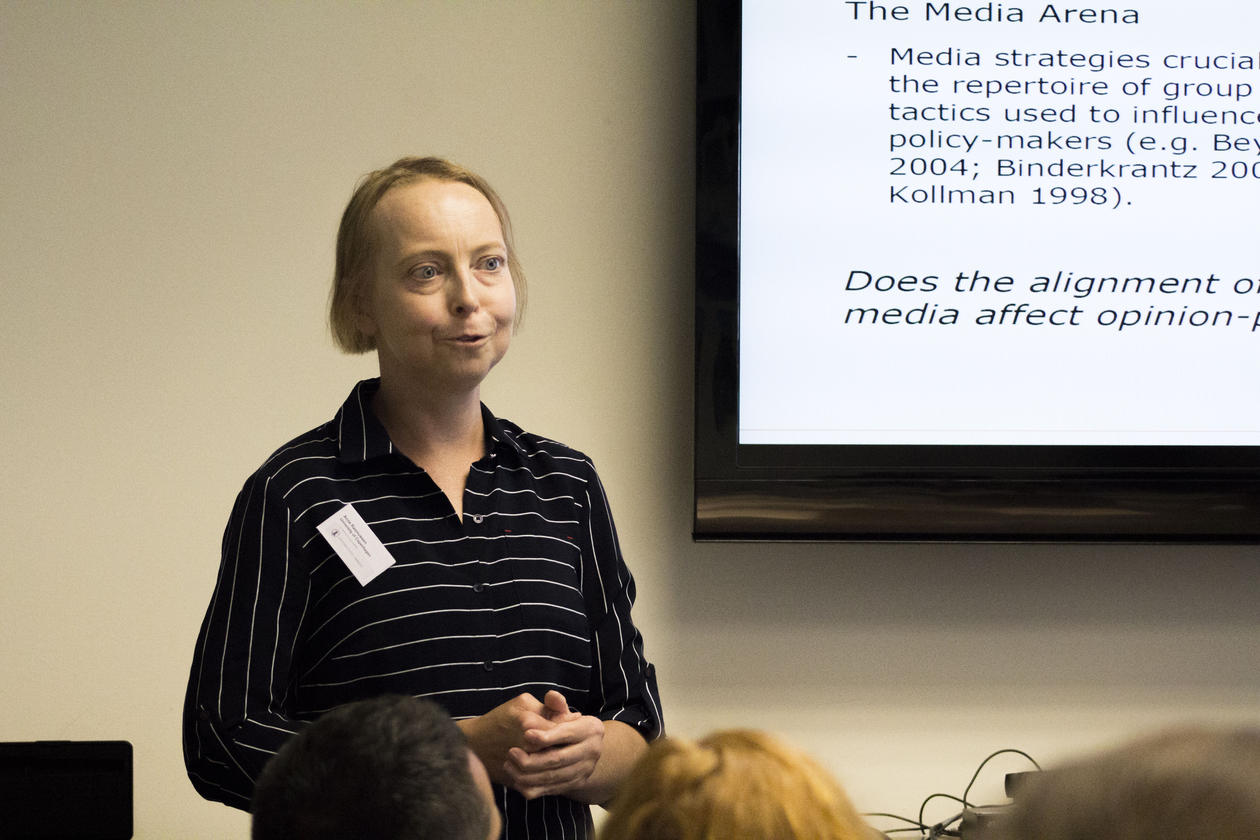 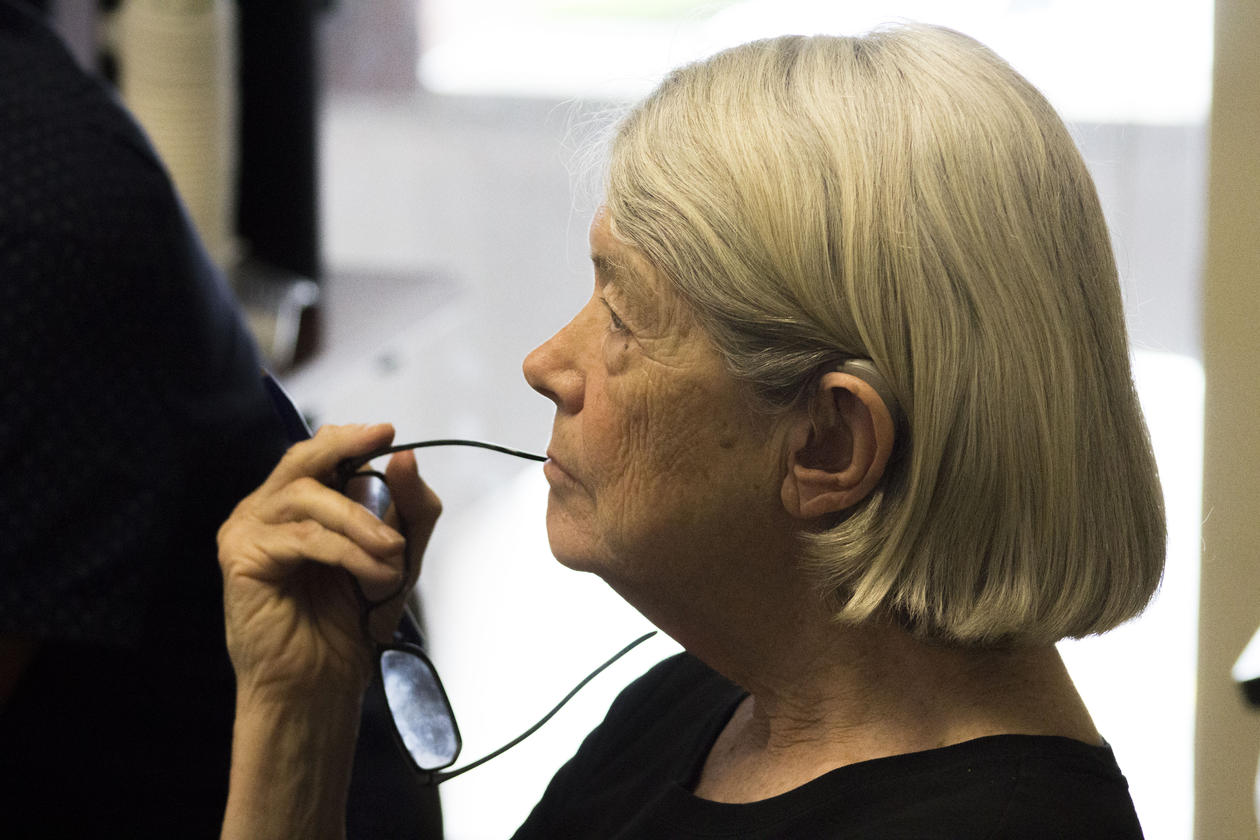 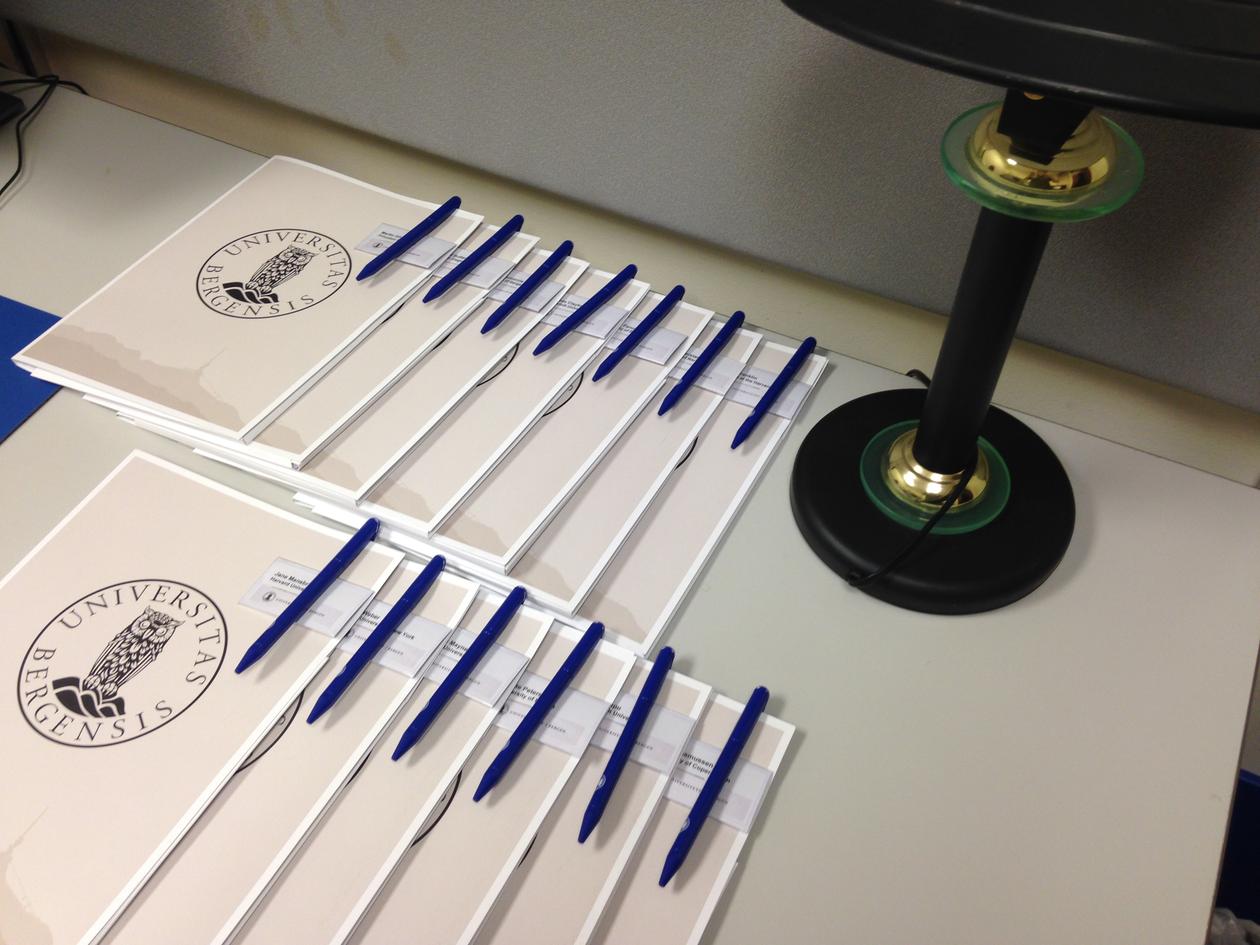 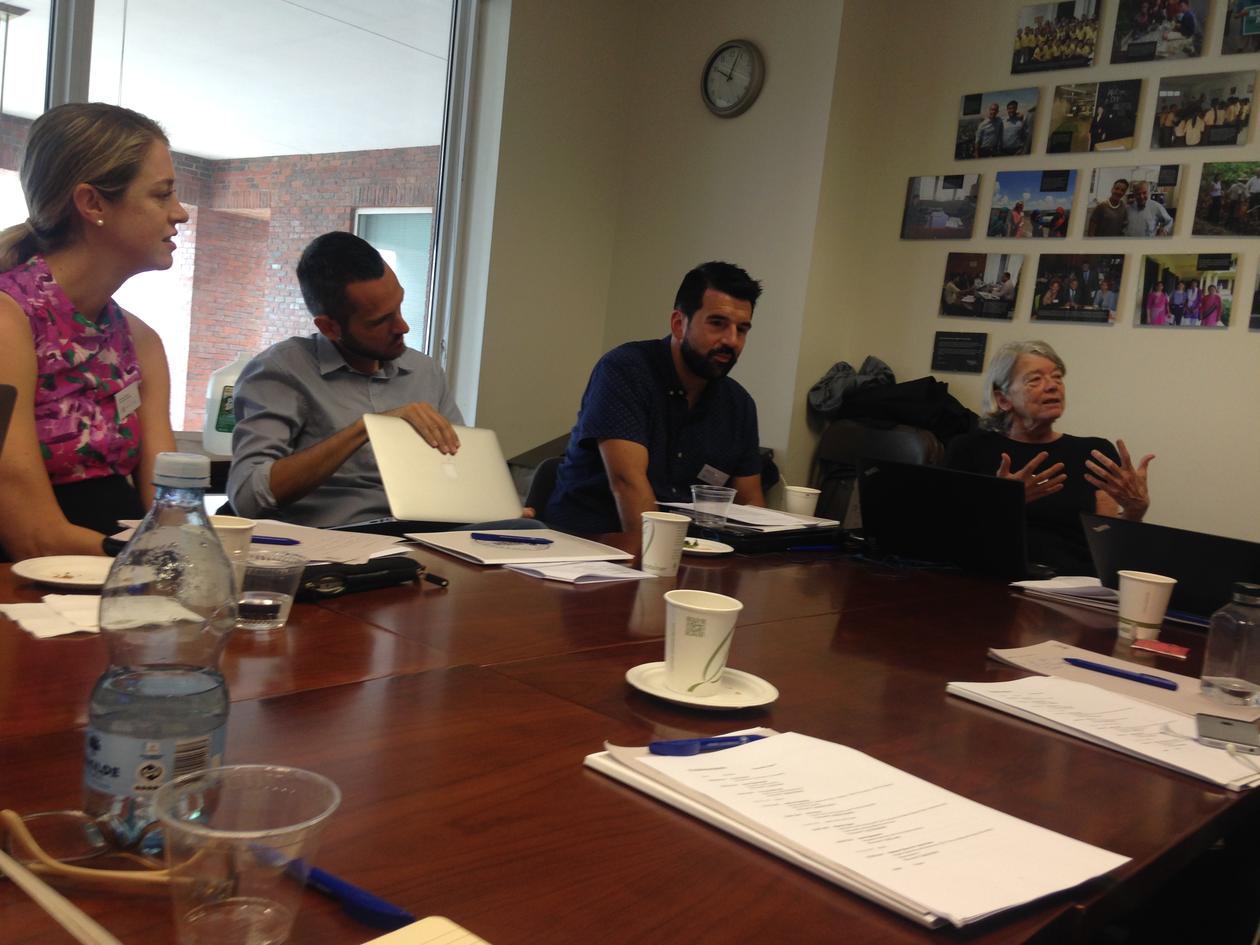 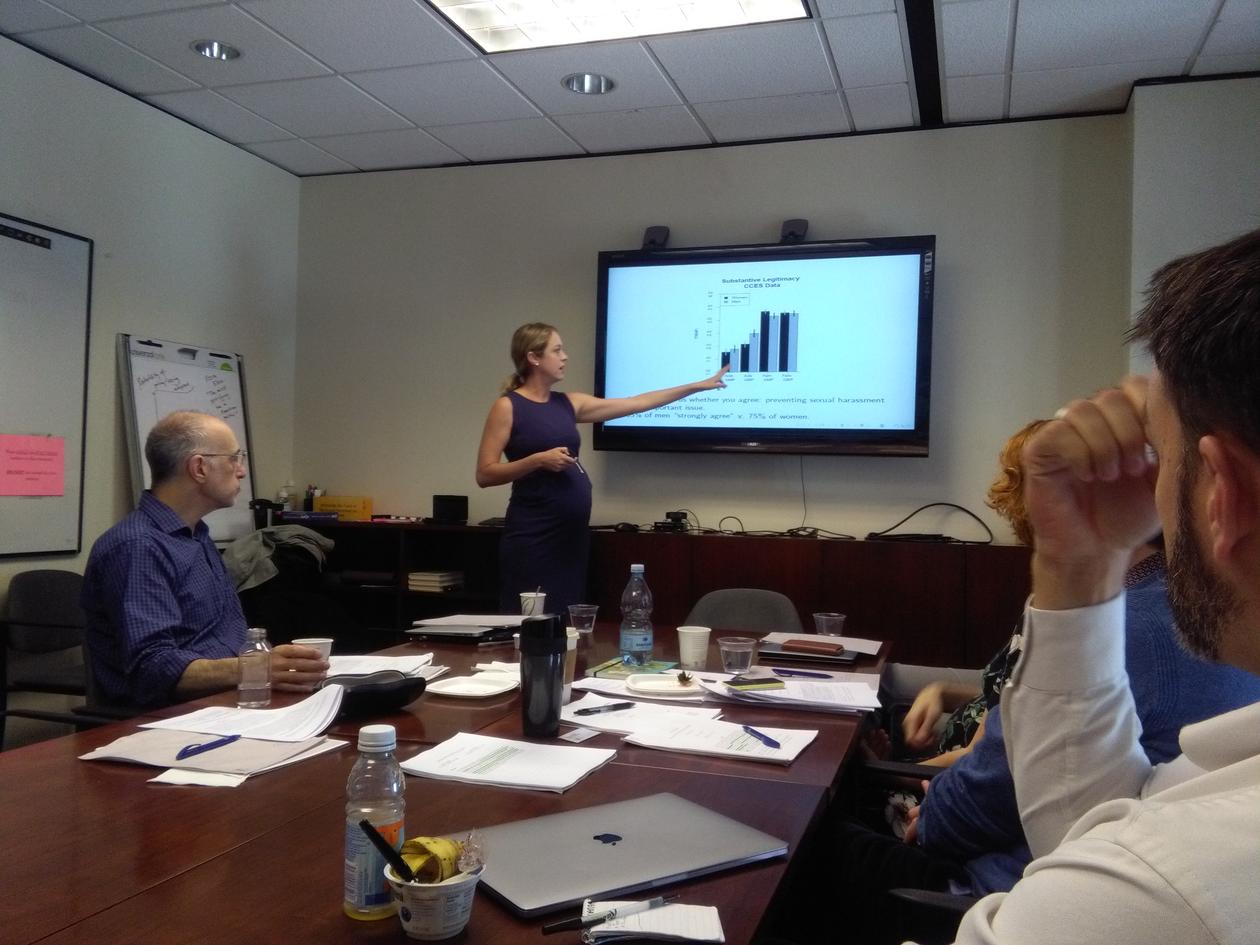