In Rokkanian spirit, Professor Kathleen Thelen presented her research on the American political economy in a comparative perspective, with focus on the historical roots of today's institutions.
Photo:
Mariana Q. Rød

In front of a full University Aula, Thelen shared her own connection to the department’s founding father and social science giant – Stein Rokkan.

- I originally studied international relations, but pretty quickly moved to comparative politics instead, much because of the comparative traditions of Rokkan. Through comparison we see characteristics and features otherwise hidden, which help explain different outcomes.

In addition to the power of comparative analysis, Rokkan’s focus on the importance of historical features behind contemporary political institutions has marked Thelen’s own research.

Pros and Cons of the Gig Economy

The term gig economy is borrowed from the life of musicians, where they often don’t have steady salaries, but are paid per gig. This structure has now found its way to many different jobs;

- Many workers are now paid per gig they perform, or per task, like walking your dog or drive you somewhere. This can be beneficial for consumers, since services are cheap and easily accessible. For some workers, such as caregivers of children or those doing these gigs on the side or for fun, the flexibility of a gig structure may be welcome. Especially so if you have highly marketable skills, such as software skills. However, if you're dependent on this type of income it's harsh, and this group faces chronic underemployement and recurring unemployment.

Those who work in the gig economy through companies like Uber and Amazon’s Mechanical Turk, are classified as independent contractors as opposed to regular employees. They are therefore not protected by the laws and regulations protecting the latter.

A Breakdown of the Traditional system

The precariat is defined as a group suffering from precarity, a lack of predictability and security. The model entails a breakdown of the traditional employment system, and the risk is placed on workers instead of companies and governments. This idea in itself is not new, and was for instance the norm during the early industrialization. The standard employment package became more common later in the 20th century, and gave rights to workers, but also powers to managers whose goal was stable long-term growth. They also wanted to avoid revolutions and unrest.

- This is now replaced with the idea of cutting costs as much as possible, especially the cost of labor. Many of today’s biggest and most dynamic businesses simply don’t match the model we’ve known. Instead they have franchises and sub-contractors and independent contractors, functioning as smaller entities in a larger network. You have different contracts, or through digital platforms maybe even no contract at all. And this doesn’t just affect low-skilled workers. Academics are now hired course by course, lawyers for single projects.

The reasons why the US had been at the forefront of the emergence of the gig economy are many, but one important reason is the fact that unions are weak compared to other rich democracies. In this group the US has the second lowest union density, but by far the lowest collective bargaining coverage.

- I consider it a minor miracle when unions win, employers have many tools to work with against the unions and power is extremely concentrated at the hands of the employer. Some of this is also a direct result from the negotiations with the South and Jim Crow. The most vulnerable groups, such as domestic and agricultural workers who are often people of color, have specifically not been protected through different acts protecting other groups of workers.

The power of these new companies become evident in the US though among other extreme wage stagnation despite of increasing employment.

- Large companies can dominate markets and determine the rules. So even though Amazon hires many people, their working conditions are quite extreme with frantic schedules.

Thelen summed her lecture up by referring to Rokkan;

- The precariat in the US is now so big that it’s almost invisible, and considered normal. But through the method of comparative analysis which Rokkan advocated, it becomes obvious what an extreme outlier the US really is in this regard. It’s not natural or given, it’s the result of concrete policies, politics and choices. 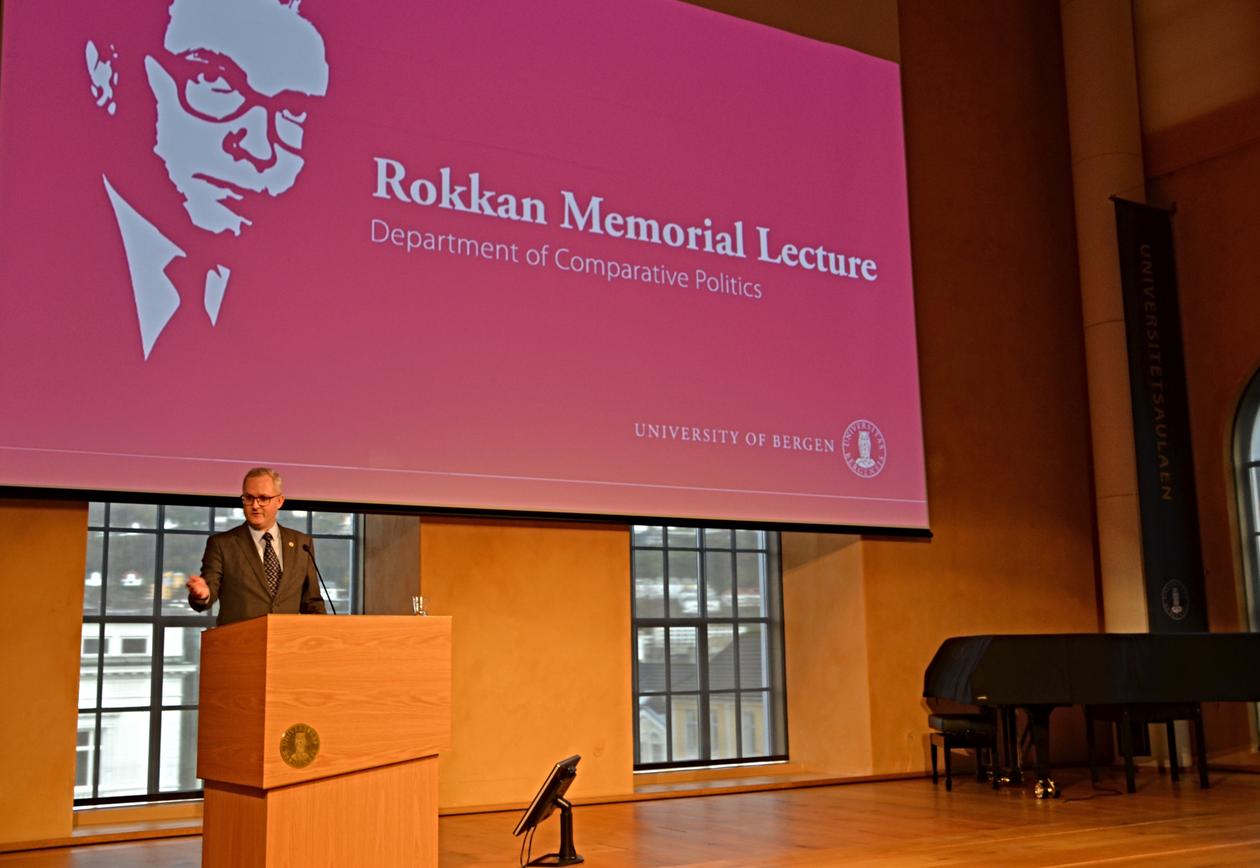 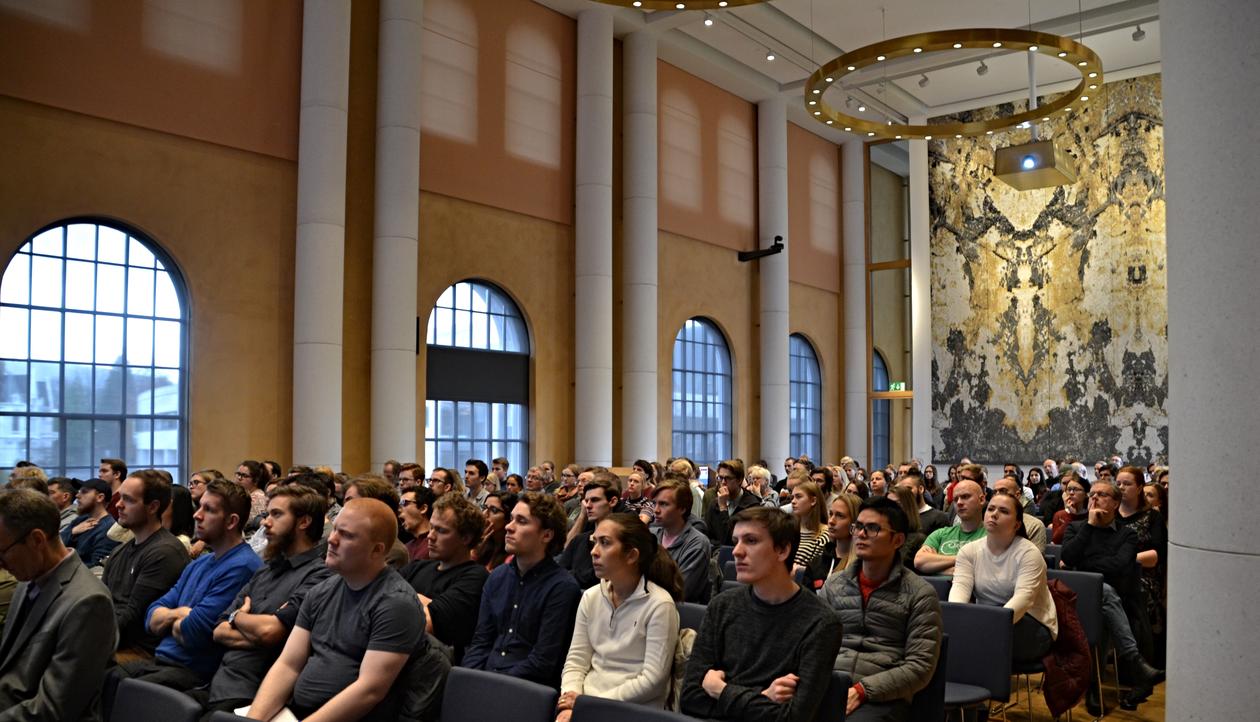 About 200 people filled the University Aula's capacity in order to listen to the lecture.
Photo:
Mariana Q. Rød 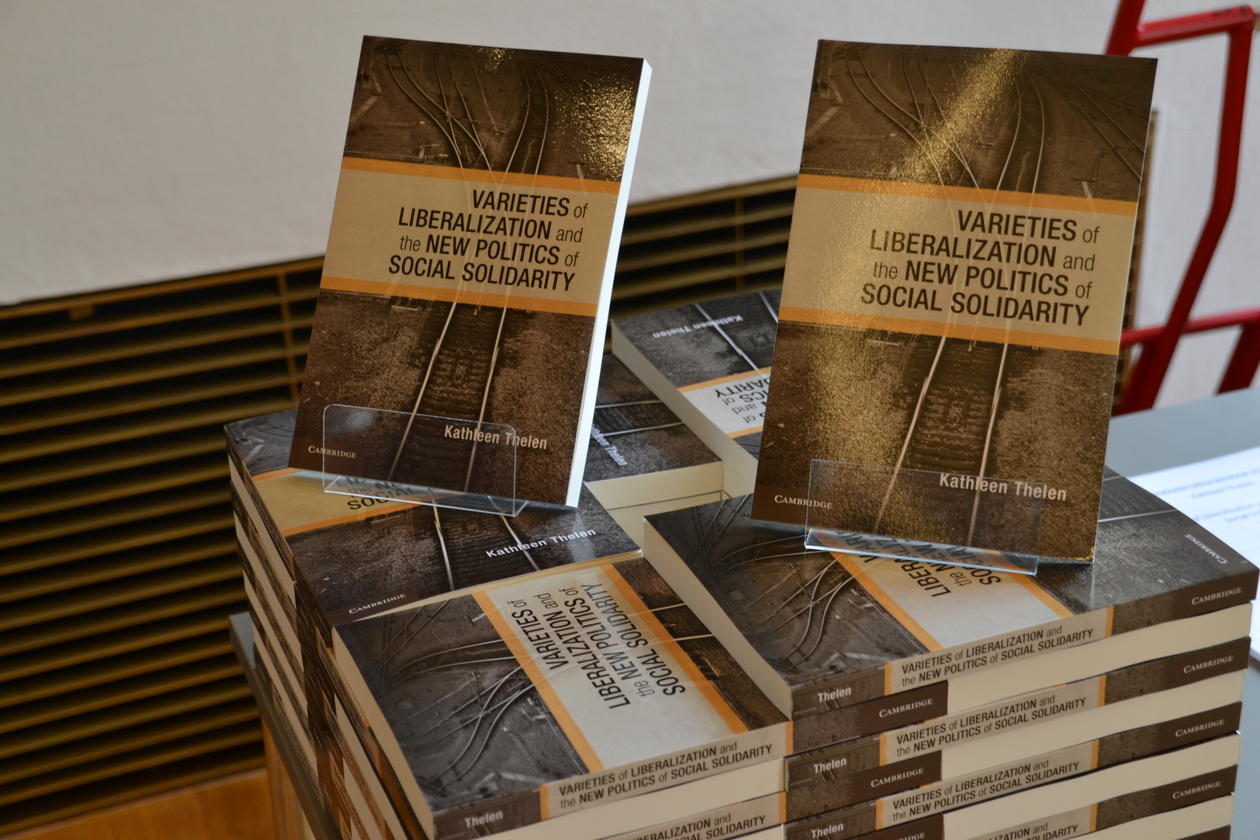