The Ukraine crisis, the free trade agreement between the EU and the US and the EU’s relations with Norway were among the topics the EU’s ambassador to Norway Helen Campbell spoke about in her visit to the Department of Comparative Politics April 4th.

The EU’s ambassador to Norway Helen Campbell visited the Department of Comparative Politics Friday April 4th to give a speech to students and faculty about the EU as an actor in foreign policy. Campbell has held a number of positions within the EU, including in the European External Action Service and the European Commission.

In her speech Ambassador Campbell spoke about a number of topics, situations and processes in which the EU is currently engaged, such as the Ukraine crisis, Kosovo/Serbia, the free trade agreement between the EU and the US and human rights.

Campbell also described the EU’s close relationship with Norway in areas such as energy, fisheries and education. She noted that she meets regularly with the Norwegian government about these and other issues.

The upcoming EU elections May 22nd-25th and leadership changes in Brussels make the coming year very interesting, Campbell said before opening the floor for questions.

The Department of Comparative Politics offer numerous BA- and MA-level courses on European politics and a bachelor degree in European studies, and both students and faculty working in the field had questions for the ambassador about the free trade agreement between the EU and the US, the Ukraine crisis, interest groups and the EU as well as questions about career opportunities within the EU system.

This is the third time the EU’s ambassador to Norway visits the Department of Comparative Politics, but Campbell’s first. Vice-Chair of the Department of Comparative Politics Jan Oskar Engene thanked the ambassador after the speech and gave her an appropriate gift from often rainy Bergen – an umbrella with the university’s logo. 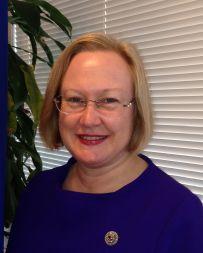