Urban Enclaving explores the many faces of Johannesburg

Having been delayed by the COVID pandemic, the third Urban Enclaving Workshop was at last held the 25th of April until the 1st of May 2022 in Johannesburg, South Africa.

This was the third workshop for the Urban Enclaving Futures project. As the project now enters its final phase, this workshop was an opportunity to present both finished and ongoing fieldwork and to debate the ideas and outcomes that the project has generated so far. As per Urban Enclaving tradition the workshop was characterized by walking tours, providing the researchers with direct engagement with the numerous facets of Johannesburg.

The five days of the workshop were used to explore the diversity of Johannesburg. Known as “The New York of Africa” and the place of the richest square mile in Africa, Johannesburg is also infamous for its high crime rate and massive inequality. During the workshop the UEF group had the opportunity to tour both sides of the city, walking through the wealthy and gated communities of the rich, as well as through the poorer neighbourhoods of Johannesburg. The juxtaposing of these enclaves made for several thought-provoking discussions in the UEF group.

We started with a walking tour of Maboneng and Jeppestown, often hailed as the “new” Johannesburg and a great place to see parts of Johannesburg history through architecture and to experience Johannesburg’s thriving street art scene.

For our second walking tour, we were lucky to gain some insight into the gated community Dainfern. It is often more difficult to gain access to the wealthier enclaves – and in contrast of Maboneng, there are no guided tours of Dainfern, no tourists (or researchers...) walking around the premises to see how the rich live.  Through one of the UEF PhD students, we were nonetheless able to visit Dainfern. This proved to be a very valuable tour in terms of seeing the contrasts of Johannesburg, as well as experiencing the ways inequality is made to be invisible by the enclaves.

Photo:
Walking through the quiet streets of Dainfern.

This was a stark contrast to our third tour, were we explored Hillbrow, a inner city neigbourhood known for its high levels of population density, unemployment, poverty, and crime. Here we had a guided tour of Ponte tower and the surrounding neighbourhood, which again led to many discussions and ideas in our group. Particularly notable was the occupied buildings, representing vast poverty, but also the gated apartment blocks which existed on the very same streets, as well as public parks and children’s playgrounds. Ragnhild was even lucky enough to find traces of her other research interests in the market, and engaged in a longer conversation with the market sellers on the import of dried fish.

The walking tours of Johannesburg allowed us to experience some of the underlying ideas that have emerged in the Urban Enclaving group; that enclaving can be viewed as a response to the idea of an urban utopia and the inevitable failure of this utopia to emerge, and that underneath the massive changes that takes place in a city, through the changes and the reinventions, there is still a continuity of sorts.

Urban Enclaving Futures; where are we now?

As many other research projects, UEF has been greatly affected by the COVID pandemic. Fieldworks have had to be postponed, cancelled or abruptly ended. Thus, many in our group were still working on the aftermath of these changes to the original plans. UEF is also happy to have welcomed several new PhD candidates to the group, in various stages of their research (a full list of affiliates can be seen here). Even so, the results of the fieldworks and data collections were still plenty and we had two full days of presentations and discussions at the University of Johannesburg, which gracefully hosted the UEF group during the workshop.

Photo:
Oda presenting at the University of Johannesburg.

Issues discussed included narrativisation of the city and its effect on enclaving, different notions of greenery and acceptable forms of nature, the feminine city, “de-risking” and the making of usable space as well as how inequality is made invisible through enclaving,  and much more.

Thanks to the varied presentations and hard work of our group, and the mixed explorations of Johannesburg, this truly made for a motivating and idea stimulating workshop. We greatly look forward to presenting the final outcomes of this project, which are now well on the way! 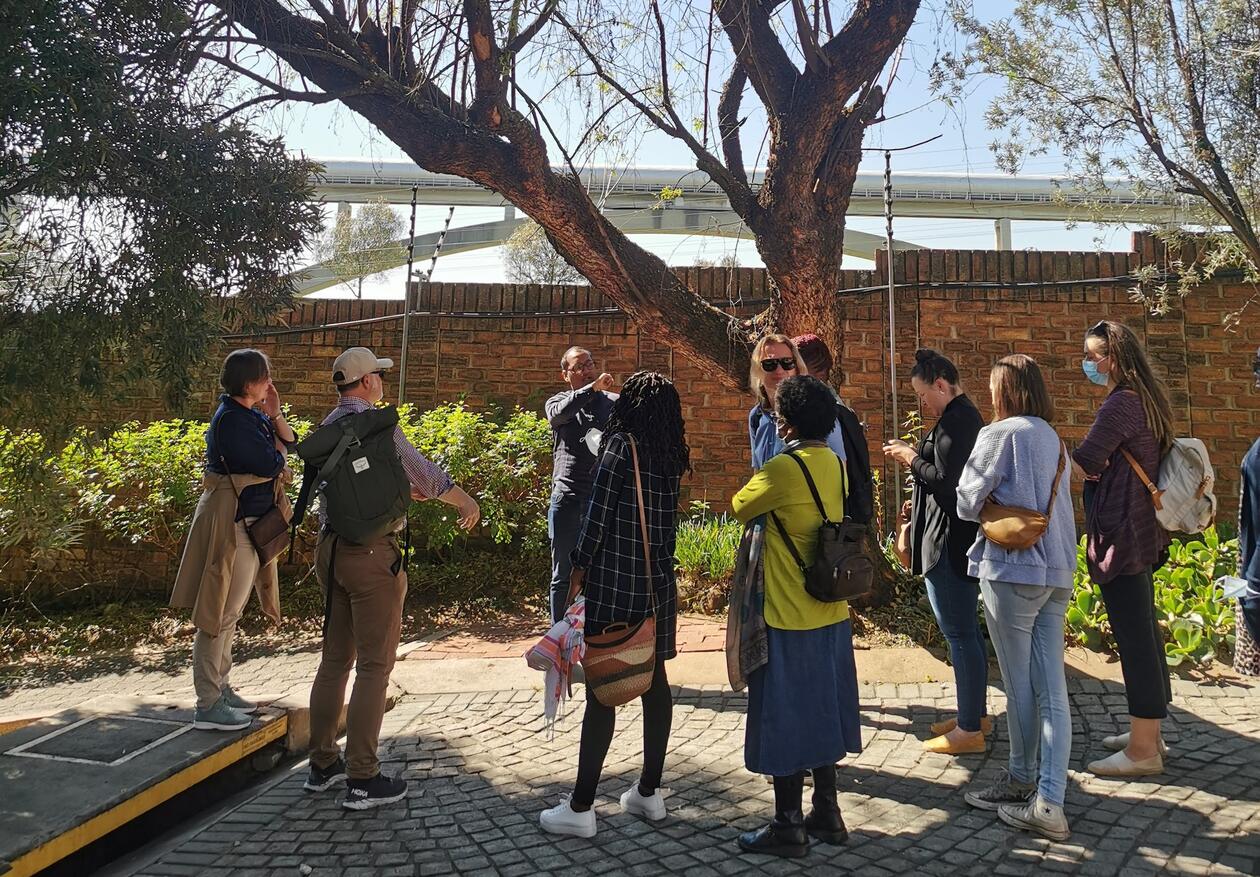 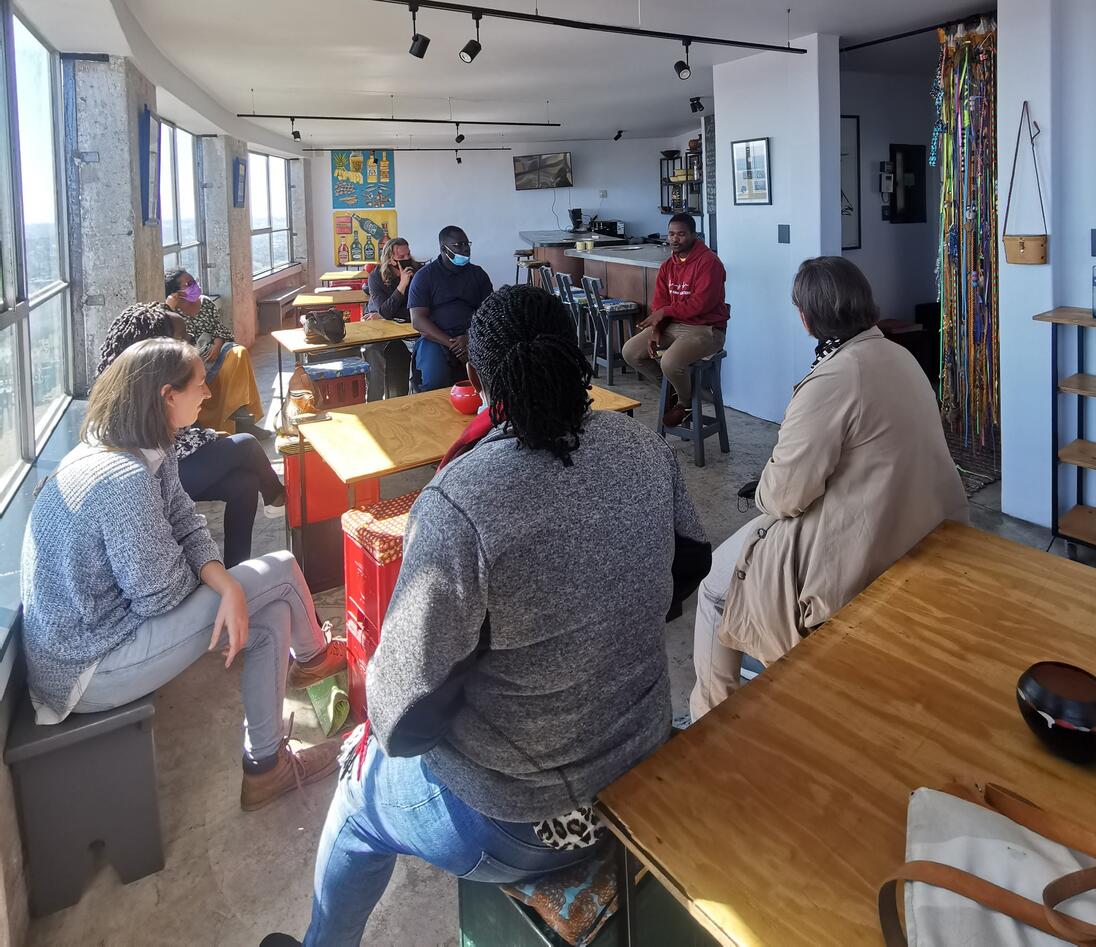 At the top of Ponte Tower, listening to the guide describing the history of Ponte
Photo:
Maria Bakke Ulvesæter 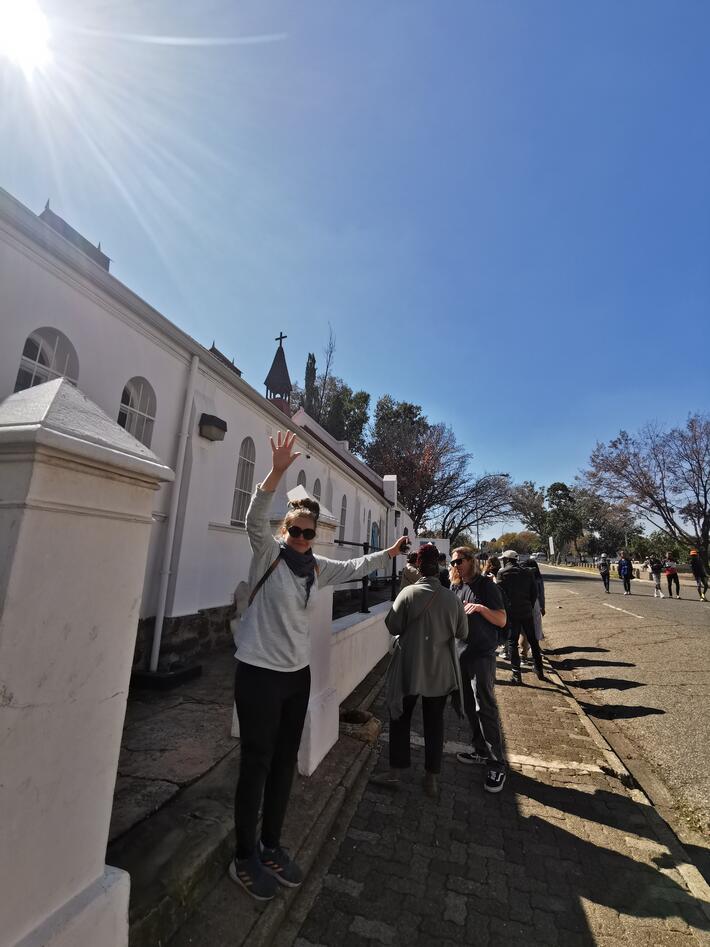 The (probably) oldest building in Johannesburg; the church of St Mary the Less, built in 1889
Photo:
Maria Bakke Ulvesæter