October 15th, Professor Bruce R. Zetter from Harvard Medical School and Boston Children’s Hospital was appointed as Honorary Doctor at the University of Bergen, Faculty of Medicine. The day before, October 14th, he gave his honorary doctor lecture, on the topic "RNA as a tool for cancer therapy".

The auditorium was overfilled with more than 270 participants, and Zetter’s talk was a great success (see abstract here). With his extraordinary lecturing skills, he framed the presentation of his research in a generalized manner so that everyone present, regardless of their educational background, benefited from the lecture.

After the lecture the participants expressed their interest by asking a multitude of questions and more hands were raised than could be accommodated in the plenary session itself. After the talk, the participants enjoyed a prolonged tapas gathering to discuss the lecture and related topics in a more informal setting.

“This recognition is a terrific honor for me,” Professor Bruce R. Zetter says about the appointment as Honorary Doctor. It is also a great honor for CCBIO and The Medical Faculty to be awarded this honorary doctorate. In their nomination, they commend Dr. Zetter's 40 years in cancer research, and consider him a pioneer in the fields of tumor angiogenesis and cancer metastasis. Working closely with Dr. Judah Folkman in the Program in Vascular Biology (VBP) at Boston Children’s Hospital, Dr. Zetter is credited with defining the role of cell migration in the development of metastatic cancers, developing novel biomarkers to predict patient outcomes, and developing new therapies for vascular malformations and for treating aggressive cancers.

Noted for his creativity, Dr. Zetter’s writings and lectures have dramatically changed the thinking of the cancer research community. In addition to his research accomplishments, Dr. Zetter has served as the Chief Scientific Officer and Vice President for Research at Boston Children’s Hospital and is an advisor to numerous biotechnology companies and academic institutions worldwide, notably including CCBIO. Here, he is a member of the CCBIO Scientific Advisory Board, and also an important contributor in the CCBIO-VBP INTPART collaboration.

Dr. Zetter has visited the University of Bergen many times. He thinks the honorary doctorate will further strengthen the relationship.

During the last years, Zetter has expanded his research in the pursuit of fighting cancer. He has abandoned the usual method of trying to get small cancer drug molecules into the cancer cells and block their pathways. Instead he has been successful in sending RNA into the tumors, which both disables cancer promoting genes and also restores the activity of natural tumor supressing genes.

“We have shown that RNA can be used to shut down cancer promoting genes," Zetter explains. "At the same time, we are manipulating the cells to restore cancer supressing genes by the use of RNA," Zetter continues. "This method has proved successful in animal experiments. I believe that the next step is treatment for human patients,” says Zetter.

We used the opportunity to ask Dr. Zetter for 3 tips to our students on how to achieve success as a cancer researcher. See the video below. (The article continues under the video.)

According to Professor Lars A. Akslen, Director of CCBIO, Zetter has been a strong and loyal supporter of the University of Bergen and CCBIO for many years.

”I am very happy that the nomination of Bruce R. Zetter was successfull and that he is appointed as an Honorary Doctor at UIB," CCBIO Director Lars A. Akslen says.

"For years he has supported UIB in many ways, as a scientist, an advisor, and a very skilled teacher and mentor. As a cancer researcher, Bruce is a living legend. His focus on guiding young people towards a career in science is truly unique. CCBIO would like to congratulate Bruce with this honour. It’s very well deserved,” Akslen concludes.

The day before the Honorary Doctor Ceremony, October 14th, the University Museum had its grand opening after 6 years of renovation, with the opening speech by Prime Minister Erna Solberg, backed up by Minister of Research and Higher Education Iselin Nybø, Minister of Local Government and Modernisation Monica Mæland, the Bergen Mayor Marte Mjøs Persen, the University Rector Dag Rune Olsen and the Museum Director Henrik von Achen. The new honorary doctorates attended the opening ceremony as honorary guests from the VIP stands together with the ministers and their entourage.

On October 15, the Honorary Doctorate conferment ceremony was carried out in the Museum Aula. The honorary doctors and UiB notabilities entered with pomp and circumstance and speeches were held by amongst others UiBs Rector Dag Rune Olsen and the deans from all faculties as well as Sir Peter Gluckman, the latter on behalf of the Honorary Doctors. A video of the conferment ceremony can be viewed in its entirety online and you can read about all the 10 honorary doctorates here. 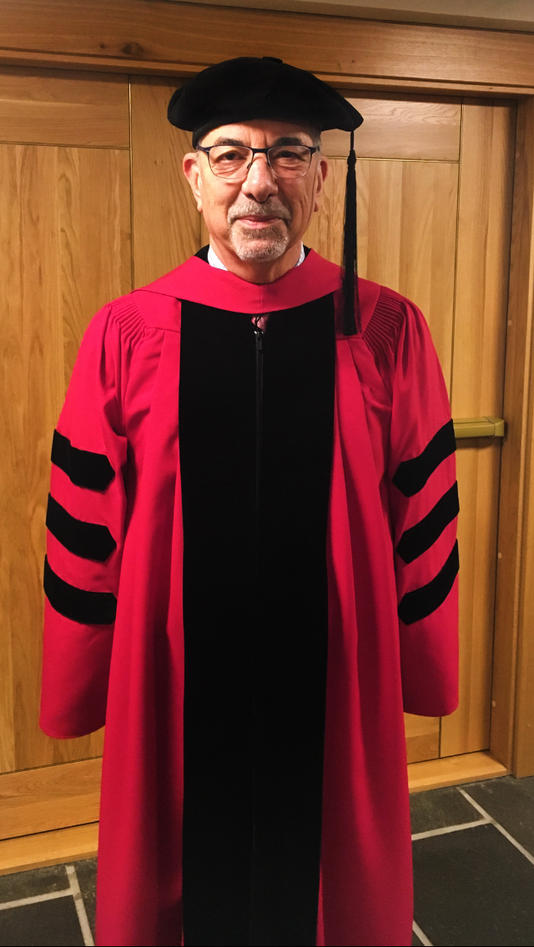 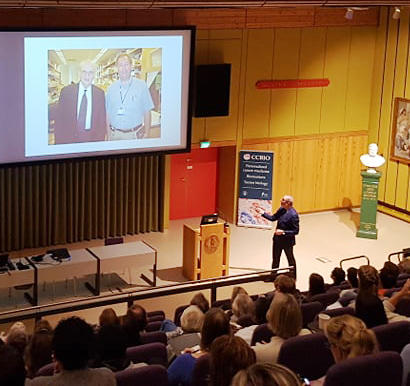 Zetter reminiscing about Lars A. Akslen's sabbatical at the VBP/Harvard Medical School back in 2004-05, under the mentorship of Professor Judah Folkman.
Photo:
CCBIO/Geir Olav Løken 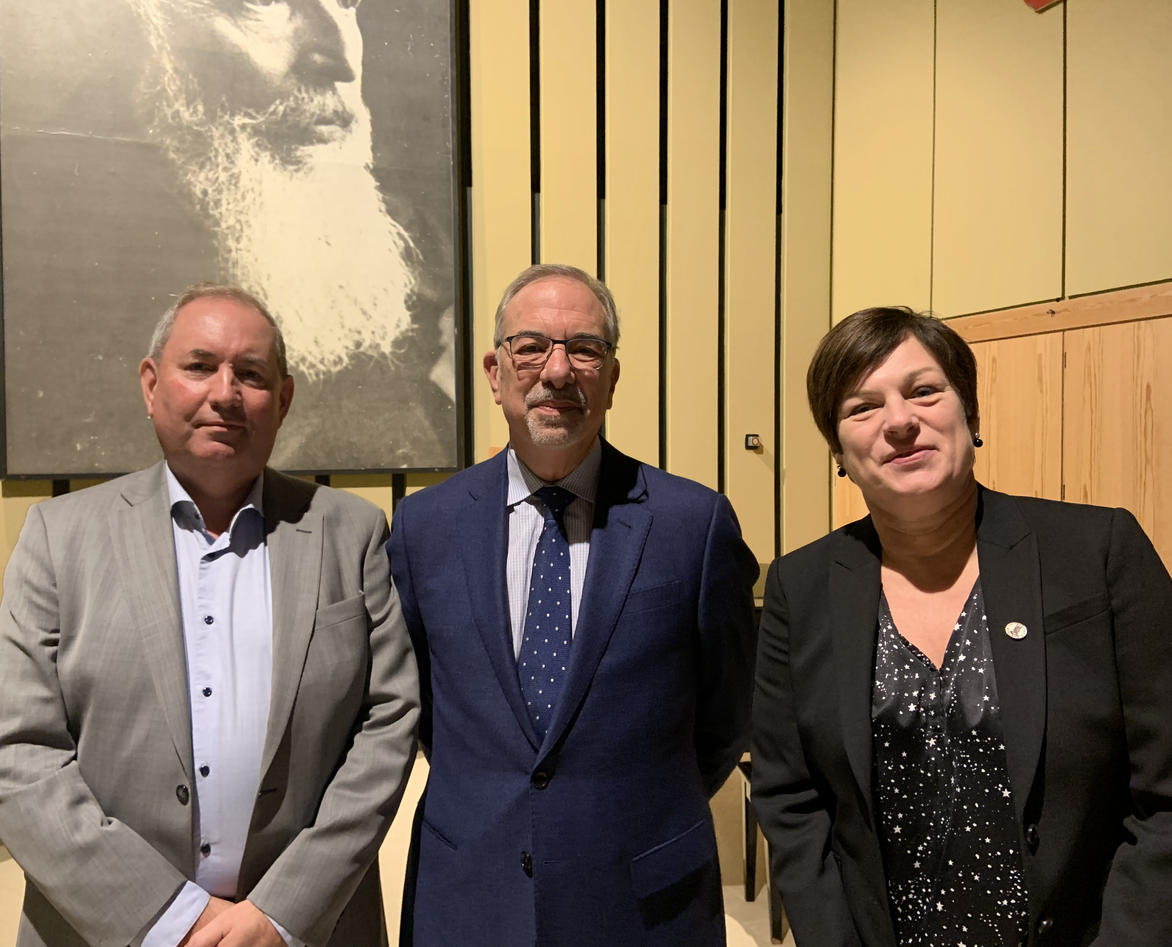 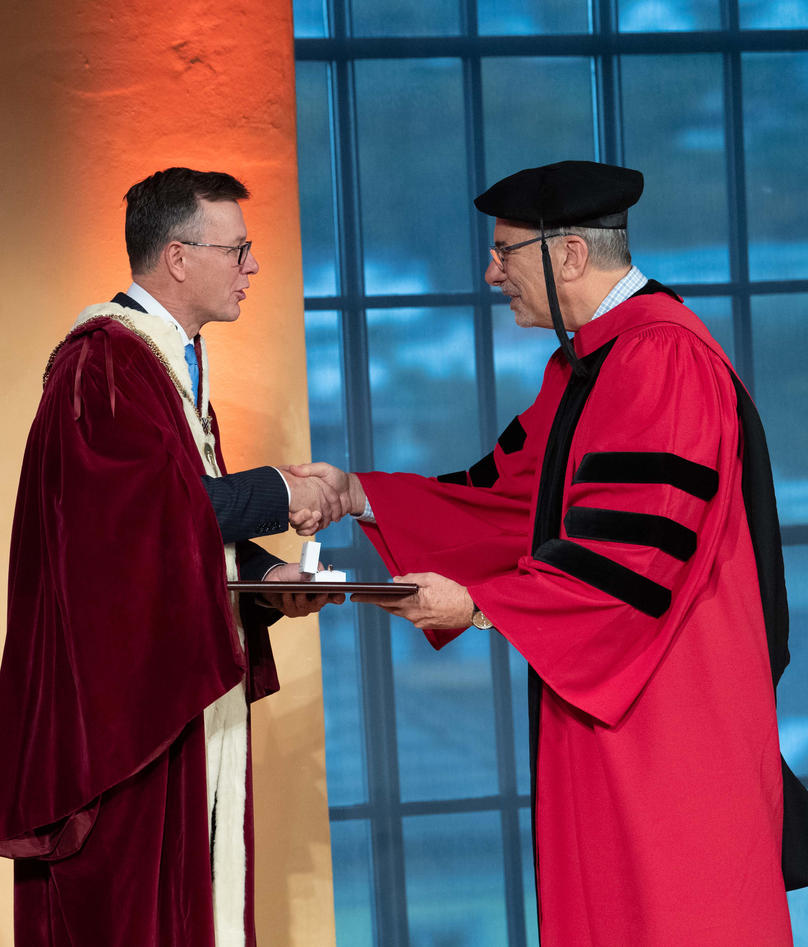