Amurwon’s research interests involve learning about the experiences of people living with chronic illnesses. She worked at the Medical Research Council’s (MRC’s) Unit on HIV/AIDS in Uganda, where her research focused on the social and economic impact of chronic illness in peri-urban and rural Uganda, where the primary social unit is the household and the community, and the effectiveness of healthcare intervention programmes and policies there.

Healthcare systems around the world are seeking to ensure that everyone has access to the health services they need without experiencing unreasonable financial hardship. Providing free treatment and medication at health facilities is one of the strategies used in low-income countries, such as Uganda. However, Uganda and other sub-Saharan African countries are experiencing an increased incidence of chronic illnesses, defined as conditions that require ongoing and long-term healthcare management. These include HIV as well as other increasingly prevalent, non-communicable diseases.

Chronic illness often requires sustained expenditure on healthcare, and due to little financial risk protection in low-income countries, this financial burden falls on individuals, resulting in a decline in economic outcome and resilience for affected households. In addition, for population groups such as those in rural areas, non-medical factors such as transportation pose a significant financial barrier to accessing healthcare.

Focusing on individuals, households and communities

Amurwon’s research is nested within the Rural Livelihoods Study (RLS) involving 200 households, which is itself based in a larger General Population Cohort (GPC). The GPC is an open cohort of 20 000 people based in Kalungu district, Uganda. MRC has been following GPC for over 25 years (since 1989). Participants experience somewhat better health services here than in most rural areas, but issues such as transportation remain difficult. RLS collected social and economic data, on e.g. asset ownership, cropping patterns, individual relations and income sources, which was used to examine how the HIV/AIDS epidemic had affected progress and livelihoods.

Amurwon’s research is based on a sub-sample of 22 RLS households selected to represent equal numbers of female- and male-headed households as well as equal numbers of households affected or not by HIV. Her research used a life history approach to obtain information on the subjective essence of the entire life of the respondents.

Data were obtained about the time of establishment of the household, status of assets owned over time and changes in membership, size and structure. The account of the individuals’ lives included their movement into and out of the household, births, illnesses, death, education and work events. Two-hour long visits were taken each month to each household over the course of a year.

Analysis of the data revealed patterns of how the households supported themselves in the event of illness or death. Further analysis yielded themes that Amurwon could investigate. Examples include

Understanding how individuals’ experience accessing care and managing other needs during chronic illness in a rural context is important feedback for health systems aiming to increase access to healthcare and protect poor populations from unreasonable financial hardship.

In 2016, Amurwon was awarded CIH’s PhD candidate award for her help supporting CIH’s PhD community. As most candidates spend a large portion of their time abroad, supportive individuals, such as Jovita make CIH a better, more welcoming place when candidates are in Bergen. She embodies the rural, community philosophy in Uganda: “Helping your neighbour is like a loan for the future”.

The United Nation’s ambitious Sustainable Development Goals include targets that all nations aspire to achieve by 2030. Health target 3.8 states: 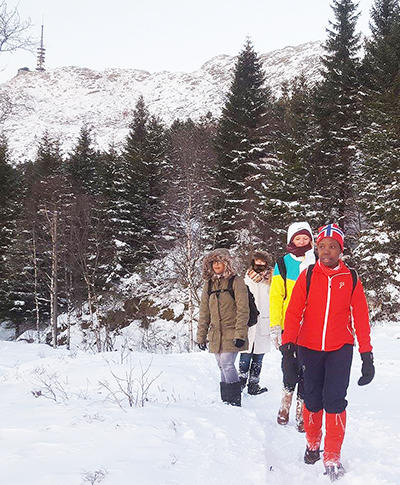